The Upper Grand District School Board officially began its discussion on police presence in schools last week
Jun 30, 2020 11:00 AM By: Anam Khan 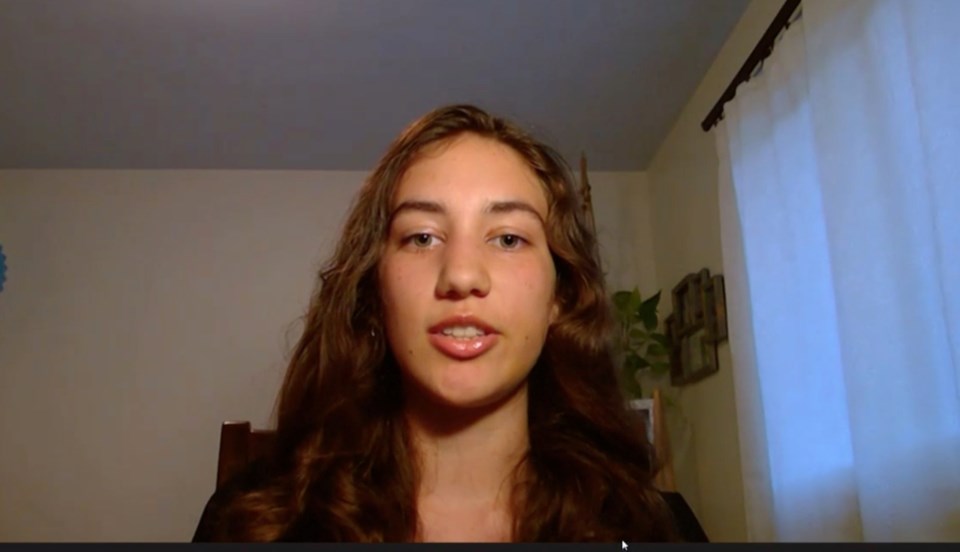 Student trustee Nathalie Alaves speaks at a virtual board meeting on June 32, 2020.

Student trustee Nathalie Alaves says the main priority when discussing police presence in schools is that all voices are heard.

On June 24, the Upper Grand District School Board officially began its discussion on police presence in schools by establishing a task force to hear voices in the community after the board heard many community members expressing concerns about police targeting Black, Indigenous and people of colour (BIPOC) students.

According to the UGDSB, the Guelph Police Service’s High School Resource Officer program for Grade 9 to Grade 12 students was initiated so officers can work closely with students to provide a safe environment for them within school grounds by offering guidance, participating in discussions to promote a better understanding of law enforcement.

The task force is comprised of three staff members, three trustees, a member of the community and a police services representative and is expected to report back to the board with recommendations by December.

“Systematic racism exists,” said Alaves, one of two student trustees on the school board.

She says the task force will present a platform for individuals to share their comments and concerns about police presence in schools so appropriate action can be taken.

“It is more than just ‘this is the issue.’ There has to be something done about the issue,” said Alaves.

Last week, the UGDSB held a virtual meeting for racialized students and their families to give input on how the board can improve anti-racism and anti-oppression policies that was led by equity leader Jessica Rowden, Indigenous education leader Colinda Clyne and social worker Geer Harvey.

On June 22, the Hamilton-Wentworth District School Board voted to eliminate their in-school police liaison program. Waterloo Region has put its program on pause.

Alaves says her voice is not enough.

“My perspective and my experience in schools can and are different than other students,” said Alaves who comes from an interracial household where her father is Mexican and her mother is German.

She says because she doesn’t look like a visible minority, she has a different experience than those who do and while she only knows the environment in urban schools, the situation in rural areas may be different.

“So making sure all those voices are heard is the most important thing,” said Alaves.

She said it’s important to promote channels that inform people how to report discrimination so the issue is dealt with by the appropriate authority in that case.

Student trustee Amelia Luff who represents rural schools is on the task force. She was contacted by declined to comment.

No Guelph pharmacies in first round of expanded COVID-19 testing
Sep 24, 2020 11:37 AM
Comments
We welcome your feedback and encourage you to share your thoughts. We ask that you be respectful of others and their points of view, refrain from personal attacks and stay on topic. To learn about our commenting policies and how we moderate, please read our Community Guidelines.