Letter writer Susan Watson hopes council ratifies the chosen location of a future south end park when it meets Monday night
May 23, 2020 11:00 AM By: GuelphToday Staff 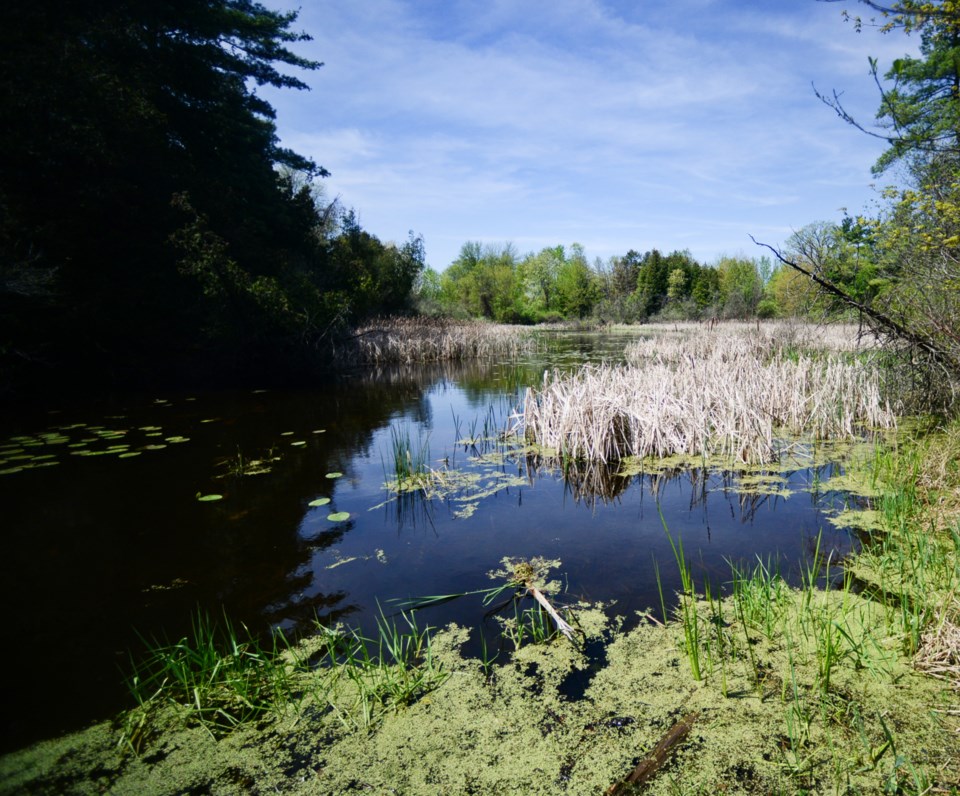 Sensitive wetlands on the rear of the Marcolongo Farm property. Tony Saxon/GuephToday file photo
This coming Monday night, city council may take the next step in creating one of Guelph’s most beautiful parks. Hall’s Pond is the hidden jewel of the Paris-Galt Moraine – part of a provincially significant wetland. In March, before the COVID-19 shut down, the Committee of the Whole voted to relocate the planned 10-hectare community park in Clair-Maltby to the Springfield property, guaranteeing a stunning vista of Hall’s Pond.

Ward 4 Councillor Mike Salisbury has a degree in landscape architecture. He used words like “place-making” and “joy” to explain his motivation in bringing forward a motion to locate the park beside Hall’s Pond. The analogy Salisbury used was Market Square in front of city hall - one of his proudest achievements as a city councillor.

Committee of the Whole was just a preliminary vote. A final decision needs to be ratified at the council meeting this coming Monday, May 25th. If you want this legacy park to be part of Guelph’s future, you need to let the Mayor and city councillors know. https://guelph.ca/city-hall/mayor-and-council/city-council/

The request for visual access to Hall’s Pond came through loud and clear through multiple rounds of community consultation. At Committee of the Whole, a majority of Council set aside staff’s recommendation and listened to what the community really wants. It’s a tremendous win on many counts. The charitable trust that owns the Marcolongo farm has been working with Options for Homes, a social enterprise company which facilitates affordable home ownership through a creative financing model. A 10-hectare park on that property would have knocked out much of that housing. In addition, the Marcolongos have initiated discussions with Wellington County around making land available for rent-geared-to-income social housing. This would be a major achievement. Not one single unit of social housing has been built in the City of Guelph for more than 25 years.

And finally, here’s the icing on the cake: we’re still going to get parkland on the Marcolongo farm site as well. The heritage designation of the historic farmstead landscape and buildings have removed approximately 3.6 hectares (9 acres) from development in perpetuity. The Marcolongos are prepared to make the majority of the Cultural Heritage Landscape available to the public as parkland by legally formalizing a free gift of 2.4 hectares or 6 acres to the City of Guelph.

Let’s leave future generations a legacy we can be proud of: a stunning park AND affordable housing.

LETTER: Shocked by the closing of Dublin Street to through traffic
Aug 4, 2020 7:00 PM
Comments
We welcome your feedback and encourage you to share your thoughts. We ask that you be respectful of others and their points of view, refrain from personal attacks and stay on topic. To learn about our commenting policies and how we moderate, please read our Community Guidelines.