The event was created after a much-anticipated event to remember veterans held in the Netherlands was cancelled due to the pandemic
Jun 30, 2020 8:00 PM By: Anam Khan 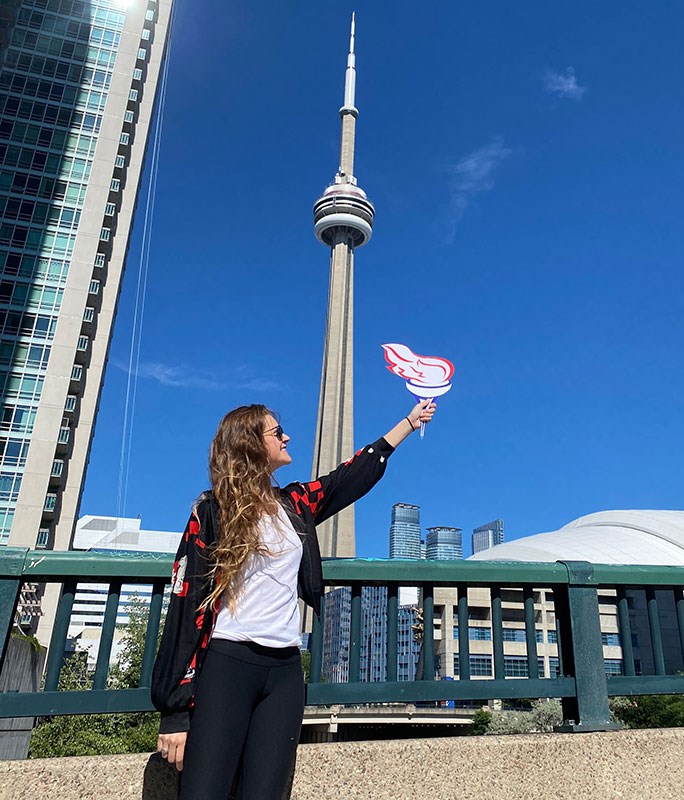 A photo from the campiagn shows Emily Kirby give a tribute to her grandfather in front of CN Tower. "For my grandpa, Gilbert Hunter, who served with the Canadian Army 75 years ago and risked his life for our peace and freedom." Supplied photo

After all 75th anniversary events for the Dutch liberation and VE Day were cancelled this spring, a veteran’s daughter launched a creative method to honour veterans.

Karen Hunter launched The Torch be yours!, a Canadian Remembrance Torch campaign launching on Canada Day.

“The Torch be yours! is an opportunity for Canadians to recognize the 75th year anniversaries and to show our veterans that we care,” said Hunter.

Hunter said all one needs to do is create their personal remembrance torch or use an item that resembles a torch, take a photo of themselves holding the torch high and submit the photo to The Canadian Remembrance Torch website where it will be shared on their social media platforms.

“We will also make it part of a special tribute that we’re holding in Ottawa in November during  Remembrance Week,’ said Hunter.

Hunter created this event after her much-anticipated event In Our Fathers’ Footsteps was cancelled.

Hunter had gathered over 200 descendants of the Second World War Liberation of the Netherlands veterans so they could walk in the footsteps of Canadian troops in the Netherlands and honour the 175,000 Canadian veterans.

The event was supposed to commemorate the 75th anniversary of the Dutch liberation where Canadian troops freed the Netherlands from Nazi occupation.

“It was sold out. Everything was completely ready to go,” said Hunter about the event scheduled for May 2020 and now rescheduled to May 2021.

She said Canada Day is the perfect day to remember veterans’ legacy.

“I’m hoping that we will receive at least 75 remembrance torches, one for each anniversary year,” said Hunter.

Veterans daughter organizes walk in Netherlands for 75th anniversary of Dutch liberation
Oct 17, 2019 1:55 PM
Comments
We welcome your feedback and encourage you to share your thoughts. We ask that you be respectful of others and their points of view, refrain from personal attacks and stay on topic. To learn about our commenting policies and how we moderate, please read our Community Guidelines.