COVID-19 sends Guelph karate champion back to the basics 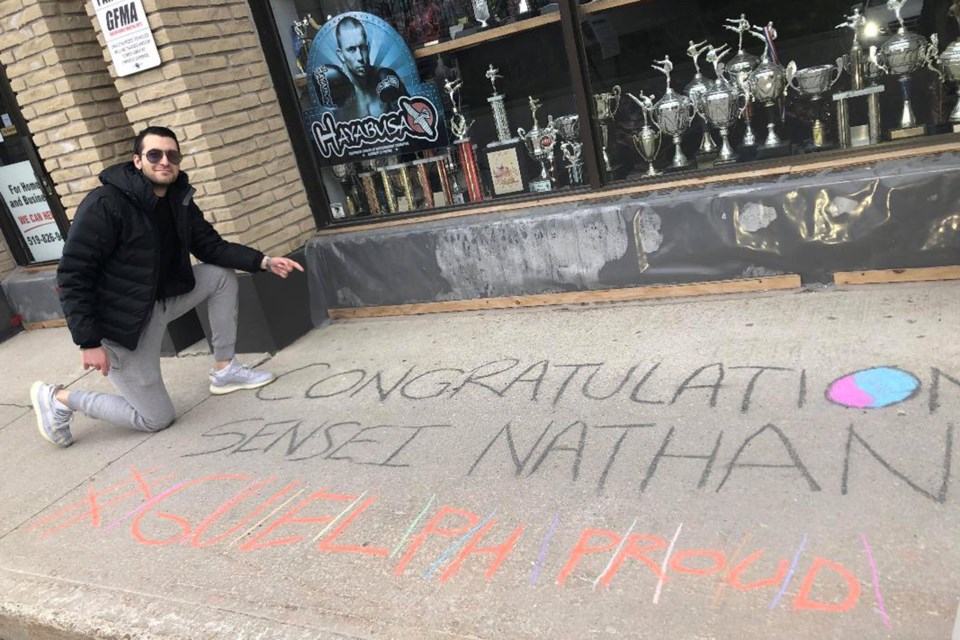 Sport karate world champion Nathan Skoufis of Guelph points to messages left for him in front of his studio by his younger students during the coronavirus shutdown. Submitted photo

The shutdown caused by the coronavirus pandemic has led Guelph’s Nathan Skoufis, the North American Sport Karate Association world champion, to go back to the basics of the sport.

Hoping to qualify for the 2024 Olympics when sport karate becomes an official event, Skoufis got in some extra solo training at his Guelph Family Martial Arts studio.

“I've been able to go back and really work on my basics over these three or four months,” he said during an interview on Zoom. “I've lost probably 10 to 12 pounds, too. I've been pushing myself so that's been good.”

The shutdown has also given the 26-year-old Skoufis his longest break from competition since he took up the sport.

However, all of those tournaments were cancelled. Now he’s not certain when he will next compete.

“There are actually world championships in Atlanta happening at the end of July. It depends if (the Canadian border) opens and I don't know what's going to happen,” Skoufis said. “It's kind of short notice, but I've been training in case that does happen.”

Of course, Skoufis will have to be comfortable with the decision to return to the competitions.

“I want to get back and compete, but is it totally safe? I don't think so,” he said. “Georgia and Florida are open and North Carolina and we've got a lot of people down there. We're wearing masks and doing the six-foot (social distancing), but we see karate schools down there and it's just like open for business like normal. It's bizarre.”

As for the Olympics, Skoufis isn’t sure that the 2024 Games slated to be held in Paris will still go that year with this year’s Olympics in Tokyo being pushed back to 2021.

“This year is for traditional karate and they're looking at 2024 as my first time doing it,” he said. “I don't know what's going to happen now with (the 2020 Games) being pushed back a year.”

Team Canada qualifying was to have been held in Calgary in March, but it was cancelled the day Skoufis was to fly to Alberta.

“There was supposed to be another qualifier in Quebec City for the Canadian team that's recognized by the IOC to go to the Pan Ams,” he said. “The Pan Ams are in Brazil and I think the Pan Ams are still going on, but it's Brazil. I don't know about that. I want to go to Pan Ams, but Brazil and their approach is completely different from ours -- totally different.”

While Skoufis’s competitive career was put on hold by the coronavirus lockdown, he kept his teaching regimen going with online classes.

“Not a lot of people were doing it, but I think a lot of people rely on the martial arts training to get through the fear and anxiety and depression that they're going through in their everyday lives,” he said. “It really is an essential service for them so it would be hard for me as a martial arts instructor to say stay disciplined and focused and we'll see you in three months. I kind of felt that I would have been abandoning them so that's a big reason, for sure.”

Skoufis has also been giving free online sessions once a week. While the sessions are free, he does ask the participants to donate with all of the proceeds going to the Guelph General Hospital for the purchase of personal protection equipment.

For the online sessions, Skoufis goes to his GFMA studio to record the sessions. One day when he and his mother Sophie, who is his instructor, were surprised by what they saw on the sidewalk in front of the studio. Some of his younger students had gone there earlier in the day and used chalk to draw their impressions of karate, write their love of the sport and their appreciation of the workouts.

“We obviously missed everybody. We're not back with physical classes yet, but we will be in the next little bit,” Skoufis said. “It was super emotional and we missed them all because they're like your family. You see them so many days a week.

“We went up to the studio one day to record a class and we see that whole sidewalk's covered in chalk and it's kids that have gone out there. It hit me and I was very emotional. To see all the little ones, it's had a huge impact in their lives. We motivate them and inspire them, but they do more for us, too -- inspiring us. It was super emotional and still is.”

When Skoufis does return to competition, he feels he might be at a bit of a disadvantage against opponents who are from places where they could resume sparring.

But one thing Skoufis does have going for him is a renewed passion for sport karate.

“We really pushed the workouts over the last four months and it really ignited a fire in me because when you do tournaments all the time, and I love tournaments, you almost lose the effect,” he said. “Now I haven't been able to do it for four months so I got in there and it really made me fall in love with martial arts again.”

A visit to the birthplace of the Olympic Games helps put things in perspective
Jul 13, 2019 10:00 AM
Comments
We welcome your feedback and encourage you to share your thoughts. We ask that you be respectful of others and their points of view, refrain from personal attacks and stay on topic. To learn about our commenting policies and how we moderate, please read our Community Guidelines.