MPs are scheduled to have an emergency debate on Canada's vaccine program tonight
Jan 26, 2021 3:20 PM By: Canadian Press 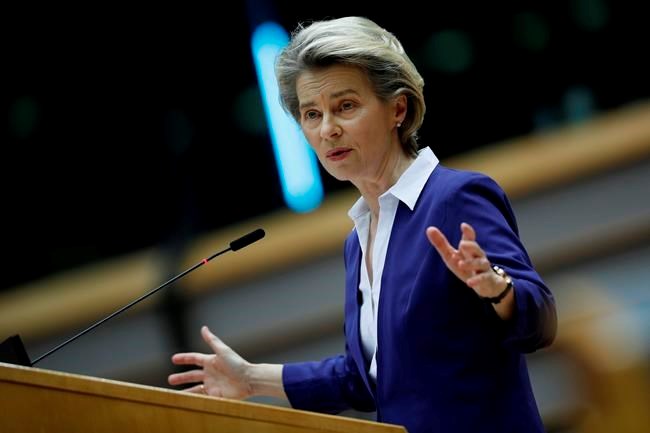 OTTAWA — Prime Minister Justin Trudeau says he remains confident in Canada's vaccine supplies coming out of Europe despite warnings from the European Commission that it is going to impose an "export transparency mechanism.'

Speaking to reporters outside his Ottawa residence Tuesday morning, Trudeau said he is "very confident" Canada is going to get all the doses promised by the end of March. And despite the sharp decline in deliveries of a vaccine from Pfizer and BioNTech this month, he said Canada will still vaccinate all Canadians who want shots by the end of September.

"We will continue to work closely with Europe to ensure that we are sourcing, are we are receiving the vaccines that we have signed for that are due," Trudeau said.

He did not explain the reason for that confidence, including whether he had spoken to any European leaders about the matter.

He said he spoke with Pfizer CEO Albert Bourla last week and Moderna CEO Stéphane Bancel Tuesday morning and received assurances from both about the supply of Canada's vaccines.

Europe — like Canada — is being shorted on deliveries from Pfizer as the company slows production to expand its plant in Belgium. Canada is getting no deliveries at all from Pfizer this week, and only one-quarter of the previously promised delivery next week.

AstraZeneca, whose vaccine candidate is on tap to be approved in Europe later this week, has also now informed Europe production problems will reduce initial deliveries. Health Canada is reviewing AstraZeneca's vaccine but won't make a decision until the company reports results from a large trial in the United States.

Anger in Europe at both Pfizer and AstraZeneca led the European Commission Tuesday to threaten export controls.

All of Canada's current vaccine doses from Pfizer-BioNTech and Moderna are made in Europe, potentially putting at risk the entirety of Canada's vaccine deliveries.

European Commission President Ursula von der Leyen said in a video statement posted to Twitter Tuesday that Europe will set up a "vaccine export transparency mechanism" so Europe knows exactly how many doses are being produced in the world's largest trading bloc and where they are being shipped.

"Europe invested billions to help develop the world‘s first COVID-19 vaccines to create a truly global common good," she said. "And now the companies must deliver."

But unlike Canada, Europe spent more than C$4 billion to develop and produce some of the vaccines now being produced, including Pfizer's and AstraZeneca's. And Europe wants its doses. Canada's investments in vaccine development have gone mainly to Canadian developers, and Canada has no domestic capacity to produce most COVID-19 vaccines at this point.

"Europe is determined to contribute to this global common good but it also means business," said von der Leyen.

European leaders are under pressure as their vaccination efforts lag behind those in the United States, United Kingdom and Israel.

In Canada, the reduction in deliveries has forced most provinces to slow their vaccine programs, in many cases cancelling second-dose appointments, and not booking new appointments for first doses.

Several European countries, plus Bahrain, Saudi Arabia and Mexico, are slowing vaccine injections because of a reduced supply. Italy is threatening to sue Pfizer and AstraZeneca for the delays.

Pfizer has promised to restore its deliveries to Canada after Feb. 15 and to send more doses than previously promised to hit its contractual obligation to get to four million doses by the end of March.

Canada is also supposed to get two million doses from Moderna before the end of March, and then 20 million total doses from the two manufacturers between April and June.

Johnson and Johnson provided some more positive news on the vaccine front, saying Tuesday it would report data on its vaccine next week, which is one of the final things Health Canada needs before it can approve that vaccine.

Canada has contracts to get at least 20 million doses from AstraZeneca and 10 million from Johnson and Johnson.

Trudeau suggested Canada's AstraZeneca doses weren't being made in Europe, but neither his office nor the office of Procurement Minister Anita Anand would confirm where either AstraZeneca or Johnson and Johnson intend to manufacture Canada's promised doses.

Opposition leaders are pushing Trudeau to seek help from new U.S. President Joe Biden, an unlikely option given Biden's promise to vaccinate 100 million Americans in the first 100 days in office.

MPs are scheduled to have an emergency debate on Canada's vaccine program tonight.

This report by The Canadian Press was first published Jan. 26, 2021.