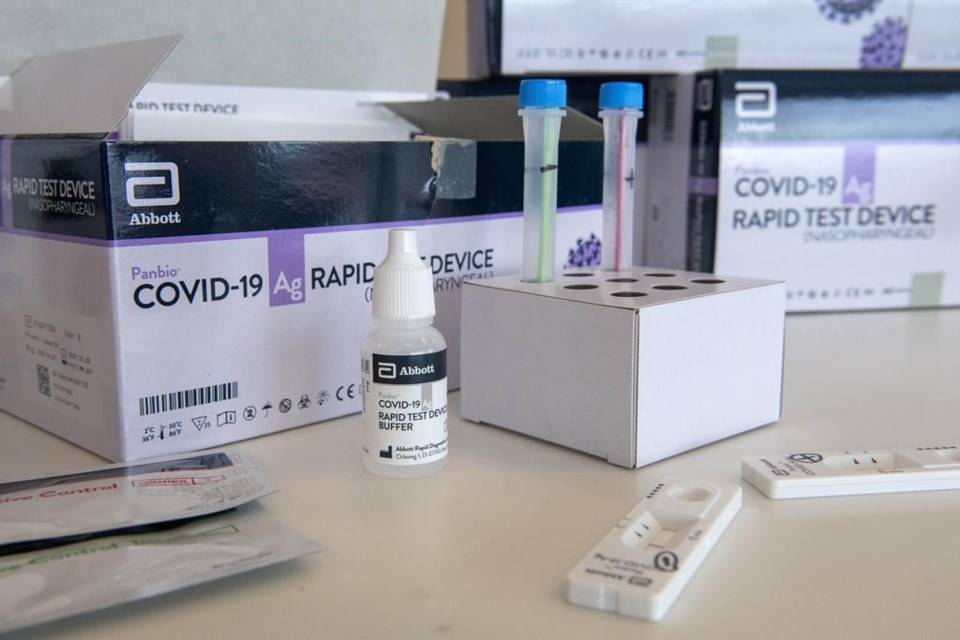 TORONTO — COVID-19 rapid tests are now being used in some Ontario hospitals and long-term care homes, with more set to be distributed across the health-care system in the coming weeks, the provincial government said Tuesday.

Premier Doug Ford said rapid tests, which can produce results in minutes rather than days, have been sent to 36 long-term care homes and 27 retirement homes, and some hospitals.

"People are using them as we speak right now and the more that come in, the more we're going to get throughout the system," Ford told an afternoon news conference.

The province will continue to deploy the 98,000 ID Now tests and 1.2 million Panbio tests it has received from the federal government in the coming weeks, he said.

The testing kits are earmarked for a total of 22 hospitals, including two hospitals already using them, as well as remote communities and some outbreak areas in hot spot regions, the government said.

Some will also be sent to corporations such as Air Canada and Ontario Power Generation, while others will be used over several months in a pilot project involving private, public and non-profit sector employers to gauge the value of antigen testing on asymptomatic workers, it said.

The premier has repeatedly called the rapid tests "game changers" in the fight against COVID-19.

Ottawa began shipping the testing kits to the provinces late last month, but figuring out how to best put them to use has taken some time, and most jurisdictions are also verifying the results of rapid tests with a lab-based test.

The "gold-standard" COVID-19 tests need to be processed in a lab, which can take at least a day to process. Rapid tests can be processed right where the patient is tested but are generally considered less reliable than lab-based tests.

One type of rapid test looks for the genetic material of the novel coronavirus, like the traditional lab version. The other looks for the specific markers the virus leaves on the outside of a cell, known as antigens.

Meanwhile, Ontario reported 1,009 new cases of COVID-19 on Tuesday, but the government said a technical issue means the figure is an underestimate. Elliott said the issue also means Monday's case numbers were an overestimate.

Tuesday's figures include 497 new cases in Toronto, 175 in Peel Region and 118 in York Region.

The province also reported 14 new deaths related to the virus.

In Toronto, now in its second day of lockdown under the province's colour-coded COVID-19 system, restrictions on businesses continued to stir debate and some pushback Tuesday.

A west Toronto barbecue restaurant vowed to open for indoor dining in defiance of the provincial rules, which state that restaurants in the grey or lockdown zone can only offer pickup or delivery orders.

Asked about the restaurant's decision, Ford insisted everyone should abide by the public health restrictions, but held back from the harsh criticism he has levelled at partygoers and others who have been found flouting the rules in recent months.

"I can't get angry at any business person, they're hurting right now and they're struggling, they're doing everything they can to stay afloat," he said. "But if we let everyone open, we're going to be in worse shape."

The restaurant was eventually ordered to shut down by the City of Toronto, after bylaw officers, public health inspectors and police were called to the site, city officials said in a statement.

It noted many patrons were not wearing masks or practising physical distancing. The city said the restaurant is now also under investigation for compliance with business licensing and zoning rules as well as building and fire code requirements.

The provincial government has also faced backlash from small businesses that say they are unfairly targeted by the restrictions while big-box stores that also sell some essential items are allowed to remain open.

This report by The Canadian Press was first published Nov. 24, 2020.

COVID-19: Steps to teacher recovery from burnout during the pandemic and beyond
Jan 24, 2021 9:25 AM
Comments