The 81-year-old French River woman and her husband are now trying to have the decision reversed
0
Nov 9, 2018 9:20 AM By: Arron Pickard 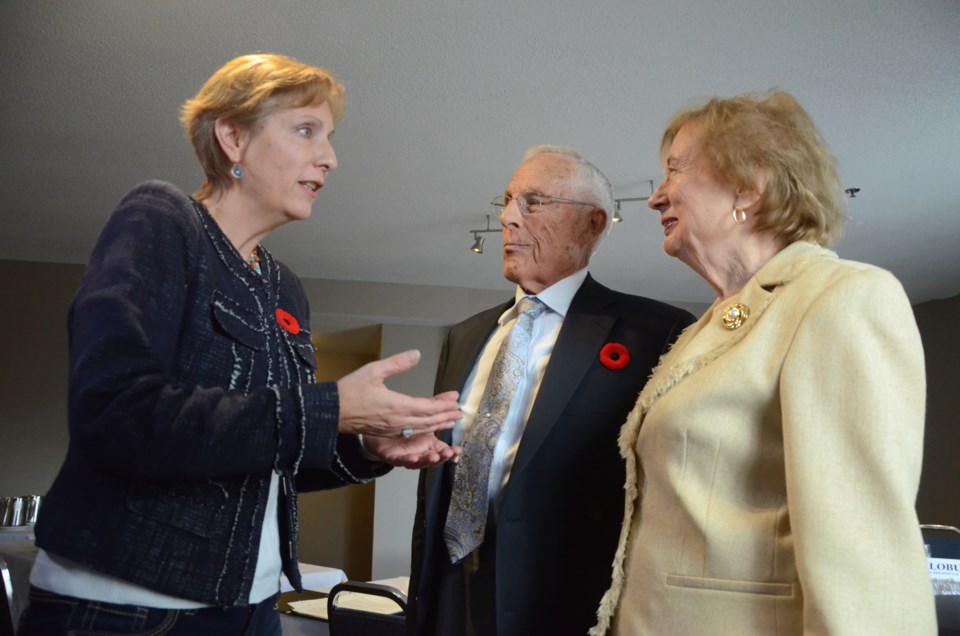 Dean and Erla Wenborne speak with Nickel Belt MPP France Gélinas following their meeting with the Health Services Appeal and Review Board, where they are asking the board to overturn a denial from the Ministry of Health to cover a $12,000 air ambulance bill incurred while they were out of province. (Arron Pickard)

SUDBURY - The fight to overturn an Ontario Health Insurance Plan denial to help pay a $12,000 air ambulance bill will have to wait a few months for an outcome.

French River residents Dean and Erla Wenborne are asking the Ministry of Health and Long Term Care to reconsider not paying for the bill the couple incurred after Erla suffered a heart attack while out of province.

The couple met with the Health Services Appeal and Review Board on Thursday state their case.

She was taken to a hospital in Sydney, N.S., where she was stabilized and a temporary pacemaker was put in. However, the nearest hospital that could perform the followup tests and procedures was located in Halifax — a distance of almost 400 kilometres.

An air ambulance was called to transport Erla to Halifax, where she stayed about 36 hours, and then returned to Sydney by land ambulance for recovery.

Erla is recovering well, but there are some lingering effects from the heart attack, said her husband, Dean, 86, speaking on her behalf at hearing for the Health Services Appeal and Review Board.

While the couple are grateful for the care they received, they are fighting a $12,000 bill from the air ambulance service in Nova Scotia. Because they were in another province, the Ministry of Health denied their claim for coverage under the Ontario Health Insurance Plan (OHIP).

“We know full well the limitations of this board, and that they can't override legislation, but we thought if we could get this issue in front of them, they could bring it to the government,” Dean said. “We're trying to illustrate that, if you travel outside of the province, there's a liability in front of you right away and you probably don't know about it. And, if you want to get insurance coverage specifically for ambulance alone, that type of policy doesn't exist.”

In his defence, Dean used the instance of an Alberta mother who, in 2015, went into early labour while visiting family in Timmins. She was flown by air ambulance to Health Sciences North, as the Timmins hospital wasn't equipped to deal with premature births before 32 weeks gestation.

In May 2018, the governments of Ontario and Alberta agreed to split the cost of the bill, even though out-of-province residents are required to pay the cost of an air ambulance in Ontario unless it's between two hospitals and they return to the first one within 24 hours.

Dean said it was the media that made that happen.

“It was a political decision to cover half the cost for the Alberta woman,” he said.

He's hoping maybe something similar will happen for him and his wife.

And, while he said he isn't optimistic, hopefully by bringing it to the review board will raise awareness of the fact Ontarians aren't covered for any ambulance services outside of their province, with a few very specific instances, like the one mentioned above.

“OHIP was very good for covering our other costs, and they did a beautiful job for my wife,” he was quick to point out.

The Ministry of Health and Long Term Care, represented by Susan Croft, Kathryn Fleming and Linda Lalani, said while the ministry concedes Erla was covered by OHIP and the transfer by air ambulance and land ambulance were medically necessary, neither of those ambulance services are certified under provincial legislation. In fact, no ambulance service — air or land — outside of Ontario is certified under the Ontario's Health Insurance Act.

While there are interprovincial agreements to cover medically necessary hospital costs , there is no such agreement regarding air ambulance services.

Dean questioned them on the Alberta mom's situation, however, no real clear answers were provided as they aren't able to speak about specific cases.

Nickel Belt MPP France Gélinas said the Wenbornes are the fifth family in her riding to come to her with the exact same situation.

“Nickel Belt isn't even that big,” she said. “If it happened to five people in Nickel Belt, I'm sure it's happening to many more, but no one is talking about it.”

She said what's happening to the Wenbornes is unfair on many levels.

“Name me one Canadian who knows that, if a medical emergency happens in another province and measures are taken to keep you alive, that you could end up with a bill for $12,000. No body knows that."

Medicare is the program that defines Canadians, she said, and it's based on medical needs, not the ability to pay for it.

“Medicare has changed since the first interprovincial agreements were first put into place,” she said. “Air ambulance did not exist then. More and more hospitals now depend on inter-hospital transfer, and they use air ambulances. But, we have this archaic piece of legislation that doesn't even mention air ambulance, even though it's now part of life-saving hospital care.”

In the case of the mom from Alberta, when the pressure was applied to both governments, they conceded it was wrong, and agreed to pay, Gélinas said.

“With a new government and a new minister of health, I don't want this issue to be put on the back burner. The ministers of health from all the provinces and territories have it within their power to change this with the stroke of a pen.

The review board will take a few months to make their decision. Failing a positive outcome for the Wenbornes, Dean said he will be negotiating with the ambulance service in Nova Scotia to decrease the bill, “but we shouldn't have to do that in the first place.”

About the Author: Arron Pickard