Council has a chance to change the channel after library hiccups

This week's Market Squared proposes a new approach to the shifting reality of the Baker District redevelopment
0
Jul 26, 2019 12:27 PM By: Adam A. Donaldson 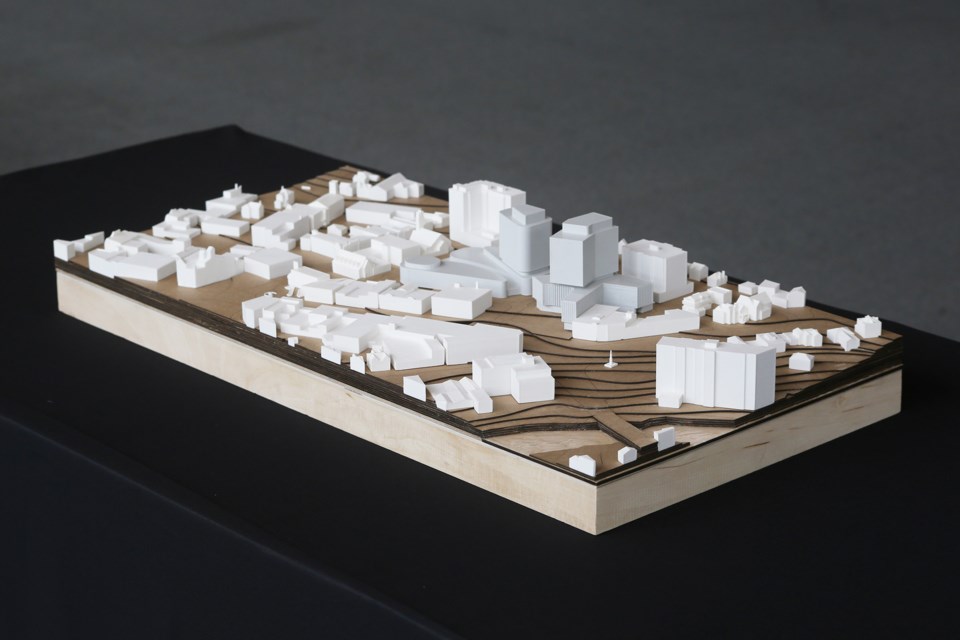 An architectural model of downtown, with the proposed Baker District Redevelopment buildings in grey. Kenneth Armstrong/GuelphToday

I remember working at the Ontarion the first-time human remains were found under Baker Street in 2005. A small sinkhole opened up and on further investigation, boom, a skeleton.

Now there’s nothing nefarious about this. The area that is now the Baker Street parking lot was once a graveyard dating back to the settling of the city, and though most of the graves were moved up to Woodlawn Cemetery, there were a couple of inadvertent stragglers.

Accidents happen, but I’ve been revisiting the old series Unsolved Mysteries lately on Amazon Prime, and looking back, I think we all should have recognized the bad omen when we saw it.

As we all know, the Baker District redevelopment plan hit a snag recently when a staff report said that the new main branch of the Guelph Public Library will have to be reined in due to concerns about Provincial changes to the how, and how much, development charges can be collected.

Then, last Thursday, the clerk’s office pulled the item from the open meeting agenda, which surely cancelled the Monday night plans for dozens of people ready to rebel against the initial staff report.

Thursday’s news was that the library project, as originally envisioned, is actually going to cost several million dollars more than originally budgeted.

On top of this news, was the revelation that one of the other major components of the project, a 500-space underground parking garage, will not be able to be built because once you get one storey underground, there’s a solid layer of bedrock that would be prohibitively expensive to dig through.

That feels like something we should have known before talking about digging deeply under Baker. Still, probably better now than after shovels have started going into the ground.

We know from pop culture that when you start building on a burial ground, you become victim to a curse. The entire basis for the Steven Spielberg-produced Poltergeist is that the developer built the subdivision on an ancient Indigenous cemetery, and simply moved all the markers without moving the bodies.

We all know how that turned out.

Of course, part of the prep work for the Baker construction is an archeological survey to makes sure all the remaining remains finally make their way to a new resting place not covered in concrete. That survey is presently underway.

The point is that it’s hard to argue that this project isn’t starting to seem cursed. In fact, you can make an argument that for 20 years, the entire enterprise to build a new main branch of the library has been cursed.

Given all these developments, it was probably a smart move on the part of council, given the serious new implications raised by City staff and the architect, to take a beat and look at all their options.

Still, I stand by the main point of last week’s column, which was that the initial report was handled in the worst possible way.

A staff report came back that recommended that the library plan be cut, immediately, and seemingly without any community engagement outside of the surely substantive engagement that would have taken place at the meeting itself.

Things were going to get rowdy.

In a way, the library’s architect spared council from a long, and loud, night in the council chambers. Not that I’m assuming a conspiracy, of course, but it’s nice when things work out.

So, in the interest of transparency, the following things have to happen.

First, the City needs to put all the information out there in an easy to digest format: where the library plan is right now after all the community engagement, staff’s request to cut the approved budget for the project, and the new budget as revealed by the architect.

Second, this information has to be *easy* to find on the front page of the City’s website. I don’t want to hear about how people had to crawl through the weeds to find the single lost marble they’re looking for.

Third, there needs to be public engagement *before* this comes back to council. The public engagement sessions for the Baker District Redevelopment were very well attended, and there are many people in town with skin in the game.

And finally, there needs to be a dedicated council meeting to this topic. There will easily be 30 people wanting to delegate to this topic, and it seems cruel to everyone to cram this on top of another busy council agenda.

Council did pass a resolution Monday night to invest an additional $3.2 million from the capital budget to the planning, site design, and professional fees for the project, and Councillors June Hofland and Mark MacKinnon were also appointed to the steering committee to the Baker redevelopment to show council’s ongoing support and confidence in the project.

These are fine moves, but I would urge council to continue to exercise such diligence. Let’s be as open through the tough times, as we were through the aspirational ones.