Dolime deal asks a lot of questions, but at least it promises an ending

This week on Market Squared, we ask the follow-up questions to the City's Dolime solution, while remembering how nice it is to see light at the end of the tunnel.
Oct 5, 2019 12:00 PM By: Adam A. Donaldson 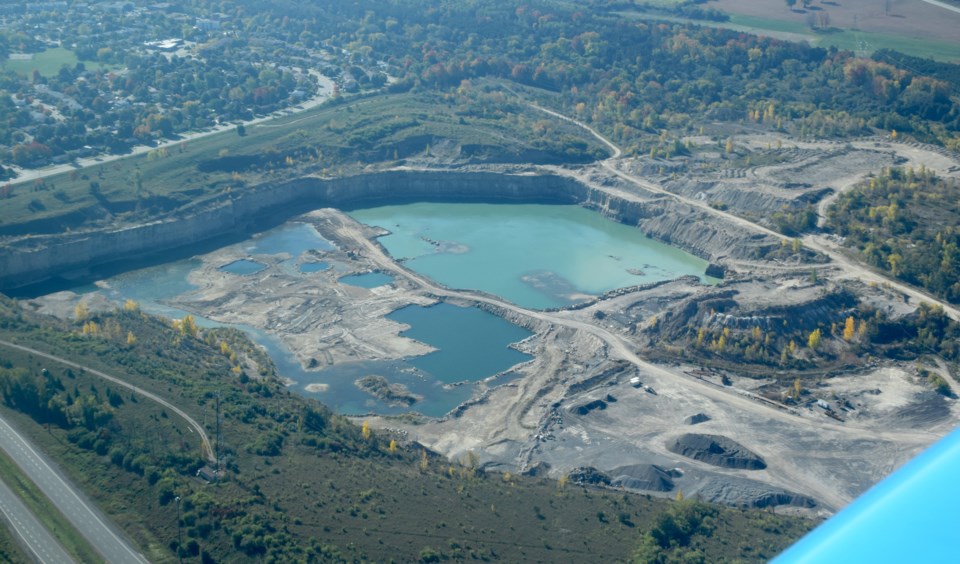 The view of Dolime from the a small aircraft. GuelphToday file photo

It was fitting that on the same day that Maude Barlow came to Guelph to promote her new book Whose Water Is It, Anyway?: Taking Water Protection into Public Hands, the city announced that it was taking some more water into its public hands.

Barlow is one of Canada’s most outspoken advocates for water protection, and Guelph is one of Canada’s most water conscious communities. That huge sigh of relief you heard Tuesday was the announcement that the city and River Valley Developments had reached an agreement to shut down the Dolime Quarry, remediate it, and annex the land and fold it into Guelph’s borders.

The Dolime Quarry is one of those issues that typifies so much of the Guelph political experience at times. Like the construction of a new main library, and the fate of the old Hanlon Conservation area, the quarry, as an issue, goes back decades, and covers numerous developments, administrations and staff members at city hall.

In fact, if you had said the word “iPhone” when Dolime first landed on the City’s radar as a problem, people would have thought, “You phone who?”

The amazing thing coming out of Tuesday’s announcement was the sheer simplicity of what the city calls, “The Solution.”

Did it really take four years of mediation (and nearly $1.7 million) for the City and the developer to get to an agreement to close the quarry, have the city take over water protection, and leave River Valley to turn the land into a new neighbourhood?

Perhaps the Devil’s in the details, and there seemed to be a lot of details left up in the air.

For instance, can River Valley really make up 15 to 20 years of lost revenue from closing the quarry early by developing the land instead?

I know what you’re thinking because the press was thinking it too, but both mayor Cam Guthrie and city staff were adamant that there’s no financial transfer to River Valley on this. It costs nothing to annex land aside from the local and provincial approvals, and River Valley’s general manager Bob Baxter said that his company will take up the cost for remediation.

And those are just the immediate questions. There’s also the matter of what type of neighbourhood will be built on the remediated quarry? Will it be mixed-use? Will this allow the city to more easily proceed with the construction of a trail network in the west end?

There was also a comment from Baxter to the media that was rather intriguing, where he suggested that not much of the land in the quarry area would be suitable for development. There’s a big pond there, and a lot of green space by the river, so how many units might get built at the end of the day?

It’s hard to imagine that there will be too many people eager to see operations at Dolime continue. From people in the area that are sometimes distracted by blasting on the site, to everyone in town concerned about the environmental degradation that comes with the business, this deal is probably as close as you can get politically to a win-win.

On that point, it proves again something I’ve considered as this election has unfolded largely on the basis of who’s doing what, or who’s not doing anything when it comes to climate change, and that is we can all agree that protecting water needs to be a priority.

That’s not a universal message, I still see an awful lot of people at the grocery store with carts full of bottled water when it’s on sale, but the political pressure is real.

How do I know? There have been two entirely different provincial governments in power the last three years, and neither one’s submitted the renewal of Nestle’s water taking permit in Aberfoyle for public feedback despite the fact that the old permit expired in July 2016.

Also in 2016, council unanimously endorsed several measures to expand water conservation efforts and discourage water taking for private sale and profit. Sometimes it seems like council doesn’t agree on much, but they all agree with the general idea that Guelph’s water needs protecting.

It’s hard to imagine that there will be any objection to that goal, which is why the City put the emphasis on water when it announced the deal. At the very least, it means that there’s an ending in sight on this file, and that, in itself, is something to celebrate.