Electric buses are good, a working transit system is better

This week in Market Squared, we burst your bubble. Again. This time about last week's celebratory announcement of electric buses.
Jan 25, 2020 12:00 PM By: Adam A. Donaldson 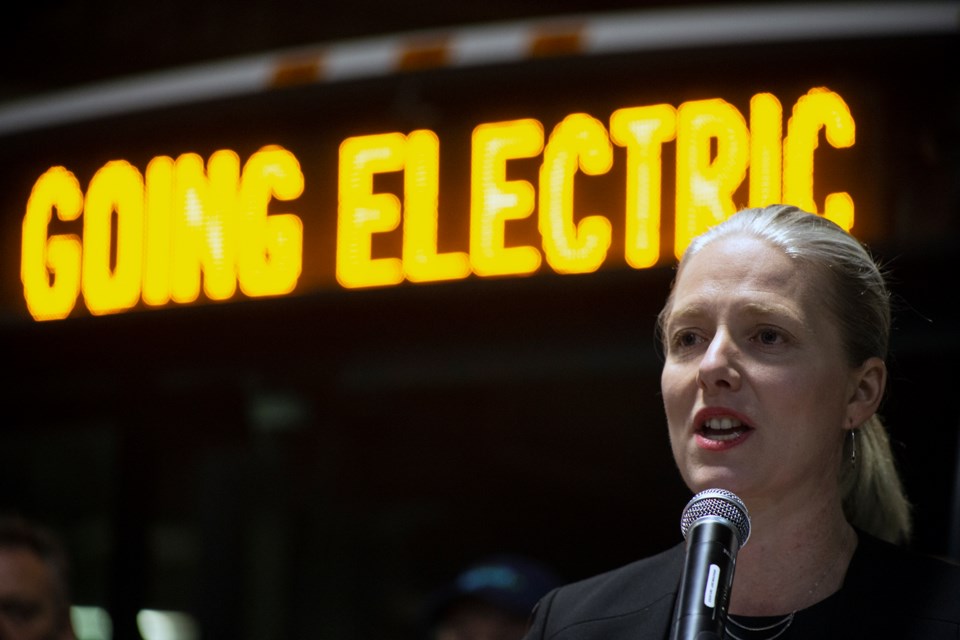 Catherine McKenna, Canada's minister of Infrastructure and Communities, speaks at a funding announcement Thursday at the Guelph Transit Garage.Guelph Transit will electrify much of its fleet of buses in the near future, with support from all three levels of government. Kenneth Armstrong/GuelphToday file photo

I approached last Thursday’s funding announcement at Guelph Transit HQ with a higher than normal amount of skepticism, and very little in terms of expectation that the news released there would immediately change our rough transit picture here in the Royal City.

In a few years maybe the $74 million invested by the federal and provincial government, plus the other $104 million from the city, will result in a transit Shangri La, but transit users on the bus today would just settle for a system that says the bus will be at the stop at the posted time and deliver you downtown in time to make your transfer.

The announced funds will go to 35 electric buses that will replace current diesel buses, plus an additional 30 buses, and funds that will go to construct a new bus storage facility that will hold 200 buses and have the power requirements to charge more than one electric bus at a time.

Now, on the surface, this is great news for Guelph Transit, and, to paraphrase Mayor Cam Guthrie at the announcement, why not take $73 million from other levels of government if they’re going to give it to you? On the other hand, it could be 10 years before we see the fruits of this, and we’ve got problems with our transit system right now.

The argument from the city would be that they’re working hard to answer those concerns, and make transit a better city service, but so much of what’s going on with transit involves advanced planning through the recommendations of the service review, the development of the Transportation Master Plan and a review of routes and schedules.

To look at it another way, if there was an outbreak of the Wuhan coronavirus here in Canada, what would you think if the government announced that they were going to rewrite the Canada Health Act before coming up with a course of action?

The week before this announcement, my own personal experience with the local transit system was infuriating. On one day I had to take a $20 cab ride to get to an appointment on time when the bus was 25 minutes late. A few days after that, a bus trip that was supposed to take 45 minutes took 75 when the bus that’s supposed to run every 10 minutes didn’t show up for 25.

Cry me a river, right?

How about his? That announcement at the transit garage on Watson Road was at 9 a.m., and I had to leave my house at 7:35 am to make sure I got there on time. If I had my own car, this would have been a 10-minute drive across town.

My experience, I think, is unique to the vast majority of the people at the announcement, because so many of them arrived by their own private automobile that they there was not enough room in the parking lot and many had to be redirected to park inside the bus garage.

With respect, the transit situation in this town will never improve unless the people directing the funds and the planning for the system know the struggle firsthand. Personally, I find something so unseemly about so many people driving to a transit announcement, and I also feel the same way about people who drive to take part in town halls and events about action on the environment.

I choose not to drive because the roads scare me, or rather the drivers on the road scare me. I also have no interests in the complications of parking, insurance, maintenance and all the other expenses that come with a car.

On top of that, almost one-quarter of Canada’s greenhouse gas emissions are from transportation, so when it comes to the country’s carbon footprint, a good place to start is on the country’s roadways.

Plus, and I feel like this is misunderstood, but every time someone complains about traffic when they’re stuck at a stoplight behind 10 other cars, each carrying one person, they don’t understand that they are also traffic.

The popular notion is that the bus is still something for other people, and that’s why real transit improvements are always over the next horizon. Sorry for being negative about the awesome news.