Forget it, Jake, it's NIMBY town.

This week's Market Squared asks if we're painting ourselves NIMBY into a corner, and why are we bothering to make official plans if we are?
0
Oct 26, 2019 12:00 PM By: Adam A. Donaldson 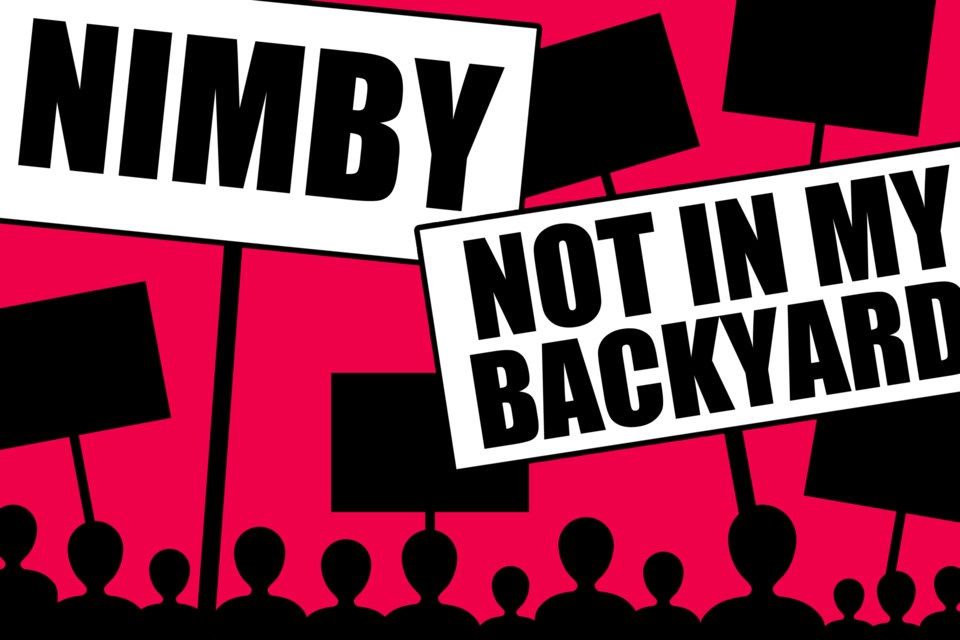 Last week at the planning meeting of council, a decision on the construction of a six-storey apartment building at 1533-1557 Gordon St. and 34 Lowes Rd. W.  was delayed due to a tie vote by council. Why? Five people delegated and managed to convince half of the even-numbered council that the development was bad news for the area.

Now I’m all about the idea that one (or five) people can make a difference, and yes, council and staff should be challenged on their assumptions and be asked to explain their rationales, but there should still be some rationality to the objection.

In other words, are we making council decisions because people are literally telling them that the size of a development in the next lot is going to take the sky away from them?

Yes, that happened, and it’s pretty safe to say that this is a chapter and verse definition of NIMBY.

The origin of NIMBY, which stands for “Not In My Back Yard,” dates back to 1979 and 80 when Virginia residents organized against a government plan to establish a new disposal site for radioactive waste.

Whether it was expended nuclear materials, other types of hazardous waste, or a regular run of the mill landfill, NIMBY, in the 80s, meant people who didn’t want to be neighbours to a dump. In Ontario, with landfills filling up and no one wanting a new one in their backyard, the NIMBY factor was one of many that lead to implementation of the blue box program and other recycling initiatives.

Now, NIMBY is any and every objection to a development, whether it’s legitimate or specious.

I can hear the knives of the town being sharpened, so I’ll just say this, most NIMBYism now has been refined with a caveat. They say it’s okay to build, and we like development, but we don’t like this development where you want to build it — in my backyard.

The absurd thing no one realizes is that if everyone says you can’t build in their backyard, you have nowhere else to build.

With that attitude, what we have now is a town full of places where you can’t build outside of some very specific designations. At the same time, we have an affordable housing crisis, a nearly zero per cent vacancy rate, and we’re expected to find room (and rooms) for thousands more in the next 10 years.

Also, we have specifically defined municipal borders, and only so much land within them that can be developed, and some of that must be saved for other purposes like commercial uses and employment lands.

In other words, no matter where you are, you’re going to have to get used to seeing higher buildings.

This is especially true for people around Gordon Street, which has been identified specifically in the current iteration of the Official Plan for intensification.

Discussions around Places To Grow do sometimes prompt questions from the doubters about what would happen if we just refused to meet our targets. Forget that thinking the rules don’t apply to you is all the rage with some of the most hated politicians in the news right now, refusing to grow as municipal policy is not going to stop people from coming to Guelph.

Outside of provincial mandates, Guelph is a highly attractive locale because of its reputation, it’s proximity to the GTA and various economic factors.

Like it or not, more people are coming, and they’re all going to need someplace to live, and it can’t all be single-family detached homes in subdivisions.

I would advise developers that they need to work more closely with area residents, but that doesn’t seem to be the problem here. Indeed, a couple of the delegates at the meeting praised the developer for their efforts but damned them for not reaching the conclusion they wanted.

On top of that, half of council then decided that their own goals and approved plans were secondary to the NIMBY concerns of the area residents. We need more density, we need more apartments, but they’re taking this man’s sky!

I worry that this is a harbinger for the coming budget deliberations. Tough calls are going to have be made, and they’ll be calls that people aren’t going to like. They might be calls that make people angry. If the city has to make a choice between cutting a $1 million or not after one nice person asks them not to while delegating, will they be able to do it in the name of the greater good?

In this case, council seemed all too willing to lean into the NIMBYness that’s making it so much harder to achieve long-term goals in Guelph.

Everyone agrees we need more transit, but no one wants to use it.

Everyone agrees we need to do something about addiction and poverty, while not addressing the societal causes of inequity.

And in this instance, we all agree we need more housing, just not, you know, in my back yard.