Some Labour Day thoughts for this pandemic year

This week, Market Squared goes on its annual Labour Day rant, and how things have changed in COVID adjusted terms.
Sep 5, 2020 12:00 PM By: Adam A. Donaldson 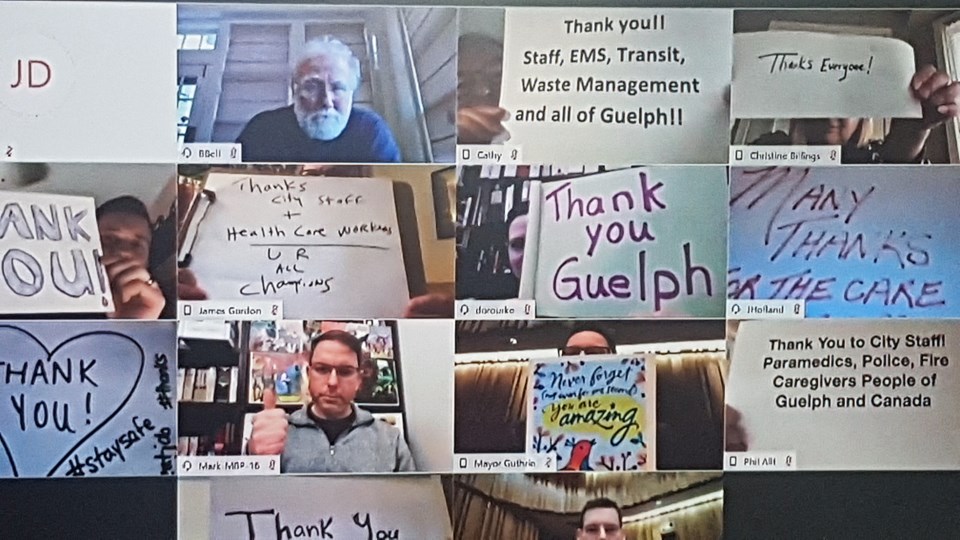 A screenshot of Guelph city councillors holding up thank you signs at a virtual council meeting in March. GuelphToday photo

Last year at the Labour Day Picnic in Riverside Park, there was a flurry of activity because of the pending federal election and the spectre of labour action by the teachers’ unions against the provincial government.

In a sense, things haven’t changed that much because there are some rumblings about a fall election, and the teachers are still fighting the government, but the most important distinction is that there is no picnic this year. If you want hot dogs and corn on the cob this Monday you’re going to have to make them for yourself at home.

COVID-19 has affected all areas of our society, including labour, and it’s a shame that organized labour had to scrub their biggest event of the year out of an abundance of concern about COVID-19 because 2020 is a microcosm of everything wrong, and everything right, with modern work.

In terms of the good news, we know now that we’re all fairly adaptable. On a dime, many of us can stop, turn, and start working from home thanks to the flexible powers of Zoom and Skip the Dishes.

That’s not to say the system is perfect, and busines travel is big business for a town like Guelph, but the daily “rat race” is the kind of system we come to rely on, and when you’re dependent on a system it’s hard to separate yourself from it. Guess what? A lot of us have managed to separate ourselves from it.

Having said that, there’s a lot of bad, or, at the very least concerning.

Gone are the days from the early part of the pandemic where we talk in glowing terms about the people who held up the economy during those months on lockdown. The cashiers, stock clerks and sales associates at grocery stores, department stores and pharmacies who reported to work and did their job back in the days when there was so much uncertainty about the pandemic response, and when case counts were at their highest.

It’s easy to forget now those especially scary first few months when we knew less about COVID than we did now. Sensible precautions like masking, hand washing and physical distancing have become the universal prescription from public health professionals, but back in March you had people showing up for their job uncertain if that fatigue at the end of their shift was normal, or if it was coronavirus.

Because of that danger, those workers were compensated with what could generously be called “danger pay,” and for the first time many people working minimum wage jobs were making a living wage. Despite the circumstances, we should not underplay the momentousness of this achievement or the fact that it took a global pandemic for the majority of us to recognize that minimum wage work is still work.

Of course, this equality was short-lived, and by the end of June there was no pandemic pay for anyone anymore. Even as these companies made a record profit, paying their workers something close to a living wage was a temporary measure even though the danger itself is not temporary.

It’s also worth noting that the owner of one of those big grocery chains was once investigated by the government for literally fixing the price of bread.

Also returning to first principles pre-pandemic is the Ontario government, who are putting concerns about their short-sightedness and last-minute planning on the backs of teachers that won’t “suck it up” and “take one for the team” to get kids back to school.

Premier Doug Ford has softened his rhetoric the last few days, but one got whiplash from how fast we went from teachers being the unsung heroes doing exceptionally difficult work to being lazy and entitled again.

The Canadian Taxpayers Federation, a group that has no more expertise on public policy than you do, piled on by condemning the some 14,000 Ontario teachers who make more than $100,000 per year, and almost single-handedly blamrd teachers for the increase in the provincial deficit. So much for the era of sympathy for the hard work of educating young people.

And speaking of scorn, how many times did you read on social media about the lazy workers at the City of Guelph who were sitting at home doing nothing. In fact, there was even a delegation about it at one of the earliest virtual meetings of council.

Of course, hundreds of businesses around the country shut down and had the majority of their employees work from home, but you don’t hear anyone talk about the sloth of people working at Bell Media, or TD Canada Trust do you? Why is the assumption that one group of workers are twiddling their thumbs at home, and others are diligently executing their duties from an improvised home office?

It’s hard to shake our preconceived notions, and in the mad scramble to return back normal it feels like we’re also going back to our normal biases about the way we think about modern work.

Or to put it another way, if a once-in-a-century global pandemic can’t change the way we think about work, can anything?

On the reasons why they voted no for the Baker District
Oct 10, 2020 12:00 PM
Comments
We welcome your feedback and encourage you to share your thoughts. We ask that you be respectful of others and their points of view, refrain from personal attacks and stay on topic. To learn about our commenting policies and how we moderate, please read our Community Guidelines.