Welcome to the post-partisanship age?

This week's Market Squared takes a break from the local beat to talk about the provincial scene, and whether or not we're all friends now with the Premier.
0
Apr 4, 2020 12:00 PM By: Adam A. Donaldson 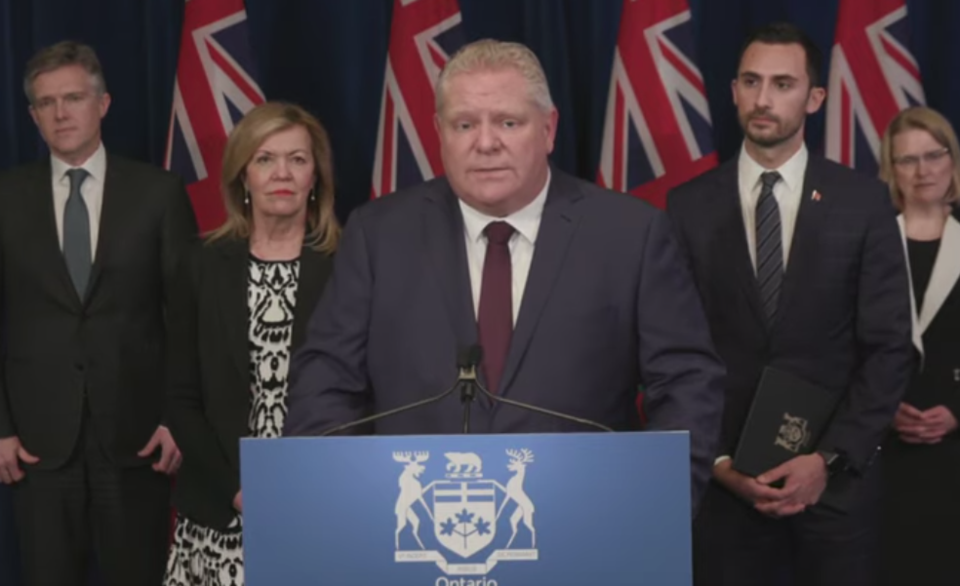 Premier Doug Ford updates Ontario on the province's response to COVID-19 on Friday. Via YouTube

It’s been said that pandemics make for strange bedfellows. That’s not actually been said, but it might as well have given the new-found state of bipartisan feelings we’ve been enjoying in the wake of the crisis.

Now this is not a universal constant. To now look at some opposition politicians in the eye is to see the vision of a person being mentally restrained from letting the proverbial bull loose. This is not the time for partisan attacks, but is this the time to forget partisan fights?

I look to Queen’s Park, where the consensus is that Premier Doug Ford is offering calm, reassuring leadership in the wake of the crisis.

That’s not to say that Premier Ford isn’t offering calm, reassuring leadership because indeed he is, and who would have guessed that after some of the most combative, and scandal-driven 18 months that a new provincial government has ever experienced?

To note Ford’s poise, and even to compliment it, is not to say that we’ve forgotten what’s transpired prior to COVID-19.

As a volunteer at CFRU, I will never forgive how the Premier and his government so cavalierly put the very existence of the station at stake with the Student Choice Initiative. And yes, his plan to amalgamate the province’s public health units seems wholly short-sighted in the wake of COVID-19. So why am I cutting Premier Ford slack?

In a word, “reality,” and the reality is that political leadership means more than dismantling the things about government you don’t like. You must be adept at responding to a crisis, you must be prepared to throw away your accepted orthodoxy in the face of data and evidence in order to do what’s needed.

Say what you want about Doug Ford, but I never thought he would make a policy announcement that would double the deficit in even the direst of circumstances. He also praised the reporting of the Toronto Star when it was not even 10 years ago that then-Councillor Ford advised his brother the mayor to cut the paper out of receiving his daily itinerary out of spite.

Why is this significant? We’ve seen so-called “leadership” elsewhere in the world where orthodoxy dies hard. On Friday morning, U.S. President Donald Trump is trying to force 3M to stop shipping much-valued N95 masks to Canada and Latin America because he still believes it’s “America First” even in the midst of a global pandemic.

From Jiar Balsonaro in Brazil, to Boris Johnson in the United Kingdom, the populist streak in western politics has lead to the rise of the leaders who feel their own guts supersede the years of training and education by experts and authorities in just about every field. The elites, in other words.

At Thursday’s White House press briefing, Trump’s son-in-law Jarod Kushner was revealed as the latest key piece in America’s response to COVID. Of course, Kushner is an “elite” if there ever was one, complete with a Harvard admittance that only came after his father donated millions to the school.

Still, Kushner got in front of the White House press corp and waved his finger at states looking for assistance to get much need medical supplies, saying, "The notion of the federal stockpile is that it's supposed to be our stockpile. It's not supposed to be states' stockpiles that they then use."

If you haven’t guessed already, Kushner has no experience in medicine, health administration, public health policy, or supply chain economics.

Meanwhile, the guy to his right, Dr. Anthony Fauci, has had to get his security enhanced after repeated death threats because a disturbing plurality of people would rather trust the non-existent expertise of a New York City slumlord than an immunologist called "the nation's leading expert on infectious diseases" in the middle of a pandemic.

I think this is why so many have been willing to cut Premier Ford some slack. Ford, and his late brother, are frequently cast in the Trumpian mould, or perhaps it’s more precise to say that Trump’s been cast in the Fordian mould, but regardless, when compared to the U.S. President, the bar for any COVID-19 response has been set so low you can easily step over it without risk of tripping.

I can’t think of a more overrated 20th century political figure than Ronald Reagan, but he was right about one thing: “Trust but verify.” As we scramble to get to the end of this crisis, I feel comfortable to say that our Provincial government is doing what it can to see us safely through the pandemic, but that doesn’t mean I won’t scrutinize.

If there’s a bright side to the pandemic, it seems to have quelled, at least in Canada, our desire for reckless partisanship, the type that’s critical without context, or treating politics like team sports.

Welcome to consensus, Premier Ford, I hope we survive the experience.