This week's Market Squared proposes that as we move forward with this summer's patio program, maybe we can get it done by leaving transit alone, for once
Feb 20, 2021 12:00 PM By: Adam A. Donaldson 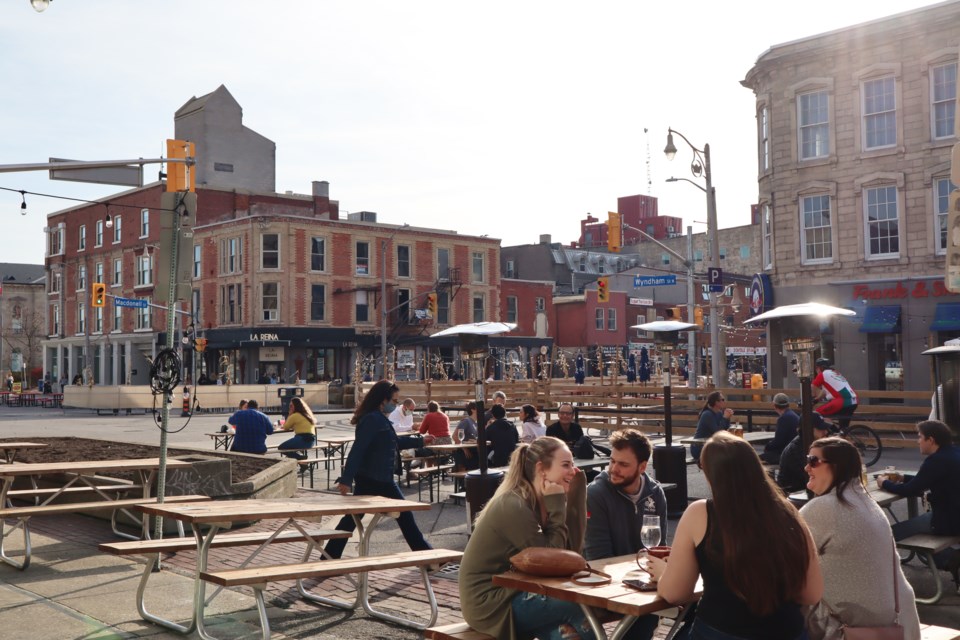 I wasn’t sure I was feeling angry enough to tap out a column this week, but then the mayor decided to tweet about this summer’s patio program.

To be fair, I don’t fault Mayor Cam Guthrie for his excitement. One cannot deny that last summer’s dining district was, for the most part, a success, and there’s more than a little excitement about its return.

But there was one aspect of last summer’s pilot that no one was willing to talk about, and it’s the aspect that will get hit again if the mayor successfully uses his social media bully pulpit to get his way.

Let’s rewind for a minute. At Committee of the Whole in March, city councillors will hear about a staff plan to implement a more permanent program similar to last summer’s dining district. It will be more or less the same, but staff are recommending that the roads only be completely closed for special events. Otherwise, traffic will continue to flow freely at the Macdonell/Wyndham intersection.

It seems like a fair compromise since there were many downtown businesses that felt the dining district negatively affected their traffic flow, or that it unfairly advantaged a certain part of the core over others.

Within a few hours of the city announcing the planned direction as submitted to committee, there were many people on social media that started to protest. “Closing the streets was the best part,” someone tweeted responding to a media report.

Not if you have to take the bus for those five months, I thought.

You see, if you close Macdonell and Wyndham it affects every bus passing through downtown except for two. If you’re taking the York Road or Grange routes, no problem, but for everyone else… problems.

At the best of times, most transit routes get to Guelph Central Station with a few minutes to spare and allowing passengers just enough time to run from one end of the platform to the other and get their transfer. Now add another couple of minutes to make a detour.

For example, the #99 Mainline heading southbound from the Smart Centre, had to drive down Norfolk, past Macdonell, and turn on Farquhar Street at Gordon, and then driving up Wyndham to turn at Carden, and loop around the eastern end of the station to get to its bay. That’s three extra sets of traffic lights and a lot of backtracking, so it’s no wonder countless people missed their connections last summer.

Let’s remember too that the city has cut back on service because of lower ridership during the pandemic. That’s understandable, and transit riders are used to being asked to compromise for the greater good, but transit riders also inevitably reach a point when they have to ask themselves if the city is self-sabotaging any effort to create a functional and robust transit system.

On top of that, it was disappointing to see the issues created for transit by the dining district get almost no airplay last summer. Not only did the issue seem to be ignored by council, staff and downtown business owners, even active transportation activists seemed to abandon support for transit.

It’s especially galling when you consider all the people employed at downtown businesses who use transit as a way to get to work, or when you consider all the people that use transit to get to the core and enjoy its amenities. Nearly every corner of the city is visited by a bus that terminates downtown, and it’s always been vexing to me why so much emphasis has been put on parking in the core, when the city practically runs a shuttle bus that services downtown.

If the philosophical case isn’t enough to warrant consideration, look at the economic case. Late last year, staff informed council that it might take as long as five years to build transit use back to the numbers it had seen pre-pandemic. The reticence of people using transit in a pandemic can’t be helped, and the city also can’t do anything about an economy where so many people are forced to work from home.

So with one kneecap blown out, you have to wonder why the city would take out transit’s other knee and hobble the system with more delays and unreliability.

For the record, I share the mayor’s vision for a car-free downtown, I think it’s the likely future of the core. But closing down streets is easy, properly re-routing transit buses so that service isn’t compromised for months because you’ve closed off the two main streets near the central hub is somewhat more difficult, and it can’t be done in just a few months.

The mayor has a big platform, and I’m asking him to use it to support a transit-friendly road closure option, and since that won’t happen this summer, maybe we can accept the proposed compromise of closing streets for special events only.

It would be nice if others had to share the compromise for a change, and not just transit users.