I just returned from Ethiopia where El Niño has created the worst drought in the region in more than 30 years. Some reports indicate that food shortages are greater than during the great famine of 1984-85. The El Niño wind is like a hair dryer on high, pointed at the region.

Back home when I flip on the TV, I don’t see any of the gaunt, skeletal images of children one associates with hunger in Africa. That’s because modern hunger in Africa is different. Let’s call it famine 2.0.

Though this crisis is affecting more than 10 million people, all I see on the news back home are stories about Donald Trump. It’s an easy story to cover—networks don’t have to deal with foreign governments and international travel costs.

With Trump it’s a matter of waiting for him to open his mouth; he’s gold! It doesn’t seem to matter that every media outlet is already covering his outbursts.

Canada isn’t much better. With their new prime minister at the helm, Canadians are enjoying Justin Trudeau and his “selfies”. Meanwhile, there’s little media coverage of Ethiopia despite the fact that some aid organizations place the drought on an equal footing with the Syrian refugee crisis.

I don’t really blame the news media. It’s a combination of our entertainment-based society and the uberization of media, where they cover the less expensive stories from close to home. 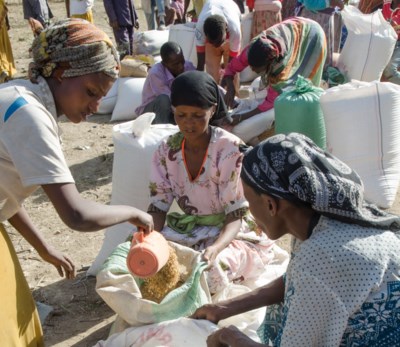 Food distribution in Dole. Receiving wheat, beans and oil. Two failed rains in Langano area and the potential for a 3rd, food distributions by both the government and from organizations like CCFC help to maintain nutrition levels in the area.

Ethiopia needs over a billion dollars in food aid. The Ethiopian government and a variety of charities and governments have pledged about half that so far.

Some blame the Syrian refugee crisis for a slow response calling it compassion fatigue. But I blame the lack of hunger images. Those pictures of skeletal children that we hate to see are like warning rockets from the bow of a sinking ship, like the body of little Alan Kurdi washing up on a Turkish beach. Or, the nearly daily arrival of Syrians on crowded boats. Those images tell the world that something is very wrong.

It’s a catch-22. The success of the modest money raised and food delivered is preventing these tragic images from being created. In fact, nearly one out of every four children in Africa are growing up stunted. Starvation is easy to see visually, but undernourishment is not so obvious. The lack of hunger images prevents global citizens from realizing that there is a problem and donating money. The sad truth about our visual media world is that a few photos of pathetic skinny children would actually help. 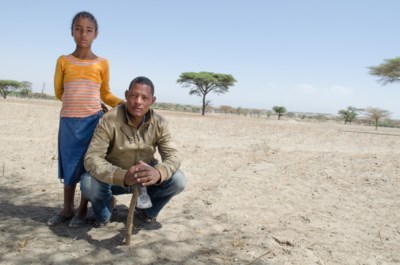 Farmer, Elie Hami, 32 yrs old. Elie has 5 children he lives in the small town of Dole, by Canadian standards we would call it a village. It is located about 225 kl south of Addis. It is not far from the main road to Addis. He farms about 2 km walk across a dusty expanse. In a normal year he gets 22-30 sacks of corn. from his field. This past year He had none, and the year before the same. Over the past two years the crops have completely failed. After he plants his seed, some small rains will germinate the crop, but then they wither and die. He uses what remains to feed his few livestock.

I spoke to one Ethiopian farmer whose last three crops failed. He earns a few dollars a week doing labour. This, along with government food aid keeps him going just enough to feed his family. But he looks fine and his daughter is downright cute as she bounces happily on his knee. But unless more money gets donated soon, that cuteness may end.

A picture is usually worth 1,000 words. But in Ethiopia’s case, they aren’t saying enough.

I bet tonight on TV there will be a story about Donald Trump, but nothing on Ethiopia.