Mercy Traveller: Alberta fires, lessons for us all

If you’re like me, you were transfixed by the devastating fires that destroyed homes and businesses in northern Alberta. I made a donation to help out and I hope you’ve done the same.

When a tragedy like this strikes, I can’t help but think about my experiences with international disasters and compare the similarities and the lessons we have learned from them which apply here. There are many, but I’ll mention just a few.

The most important preventative measure in mitigating a crisis is the capacity to imagine what might happen, and then creating a plan to avoid disaster. Good planning meant lives were saved in Alberta. But repeatedly, evacuees said, “We never thought a fire like this could happen.”

I have been to some 40 global emergencies; I’ve heard this frequently. Whether the issue is refugees in Europe or a tsunami, the effects were made worse by the unforeseen size of the event or an unimagined event itself. Our readiness is limited by our inability to imagine worse-case scenarios.

Another lesson learned from other crises is to prepare for a long recovery. The ripple effects of a catastrophe will endure long after the TV cameras have left. Even with massive funding from insurance, government and other sources, it will take more than a year before families can move into rebuilt homes. 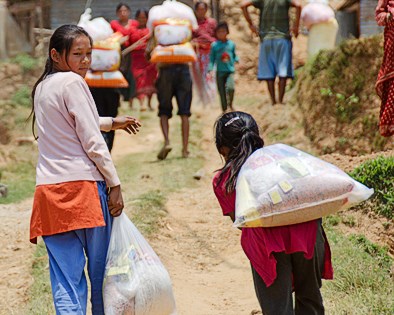 It will take years for Nepal to recover from last year’s earthquake which destroyed 1 million buildings. Photo by Philip Maher.

But imagine an earthquake in Haiti or Nepal where there is no tax base and few public services. There is rarely enough money from the international community to rebuild every home while providing food, clean water, temporary shelter, medicine, education and fuel.

Five years after the Haiti earthquake, some residents still have no permanent housing. I was in Nepal during the earthquake in 2015, which destroyed more than a million buildings. Will they ever truly recover from such an event? I worked in the Turkey earthquake more than a decade ago. It has taken at least that long to recover. Our support for those affected must continue.

Repairing homes is relatively easy when compared with the lingering trauma in the lives of children and adults. It could take years for people to deal with the horror of fleeing from the safety of their beloved community. Homes are supposed to be places of refuge for families. When our security is challenged, it does something to our psyche. Later in life it tends to haunt us. The former mayor of Slave Lake, Alberta recently spoke about how the Fort McMurray wildfire re-traumatized some Slave Lake residents who endured a similar fire five years ago.

I cannot fathom the long-standing psychological effects on refugees who have fled Syria or Iraq. Not only were they physically under threat from war, but they have fled their country forever.

There are a many lessons from Fort McMurray which apply to us every day.  For example, what are the risks in your home; fire, flooding, loss of power? Are we ready for the worst case scenario? And finally, when disaster strikes in Canada or Haiti, Sudan, Bosnia or Syria, we need to keep supporting the rebuilding effort long after the pictures have disappeared from the news.

Rebuilding takes longer than you think. And we need to help for as long as we can. After all, caring is what makes us human.