Mercy Traveller: What I learned from Rwanda’s genocide

Day of remembrance for the victims of the Rwanda genocide
Philip Maher Apr 7, 2016 12:00 PM
Previous Next
1 / 1 Emmanuel, killed and maimed the families of these woman. In addition he killed 15 people. He cut off Alice’s hand and killed 5 of Agnes’ family including her mother. Today, they teach forgiveness and reconciliation and work together building homes for those in need. Photo by Philip Maher for GuelphToday.
Expand
Previous Next

Usually the UN commemorates generic causes like water, children or refugees. But April 7 is special, as it was selected to commemorate a specific event: the Rwandan genocide, which killed some 800,000 people over 100 days in 1994.

People were beaten and hacked to death in one of the most horrific mass killings in history. As part of my role with World Vision, I interviewed survivors and listened to their stories. Some escaped by hiding in pit latrines, under bodies or in swamps. One woman told me how she begged her brother to kill her, to avoid being hacked to death by the militia. Millions of displaced families fled to squalid refugee camps in Congo and Tanzania, and many died in those camps. 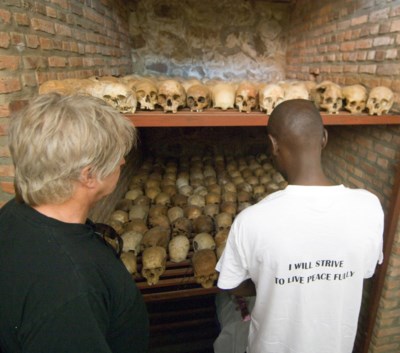 Nyamata church memorial, It is believed that up to 10,000 were killed inside the church with perhaps another 35,000 killed around the church compound between April 10 and 12. Photo by Philip Maher for GuelphToday.

I remember it well—how could I not? I saw piles of bodies six feet deep. The smell was unbearable. It seemed that Rwanda was crying, but nobody was listening.

Conversations with colleagues often drifted to the nature of evil. We’d scale high philosophical mountains, like Sherpas in search of truth, but we never quite figured it out. All we knew was that a lot of people died and that trauma was surging though the veins of everyone, even us. I often call it a conveyor belt of misery, but then isn’t all war that way?

Back home in Guelph, I often reflected on what knowledge I gained from my trips to Rwanda.

Here are some things I learned:

Almost all of us are capable of doing evil, or at the very least, of doing horrible things, given the right circumstances. The struggle we had in comprehending the situation was not that people killed, but that so many “normal” people—school teachers, farmers, shop owners—took part in the killing. It was like a second job. They would leave in the morning and return home to their kids and families at night. The sheer number of people who committed atrocities was unimaginable.

But, I also learned that there are always those who will risk their lives to save others. Perhaps they have independence of thought or maybe religious conviction. But they see clearly what they must do: protect the vulnerable. I heard many stories of people who were saved by neighbours.

The most significant lesson for me was the importance of forgiveness and reconciliation as a step toward building a future. 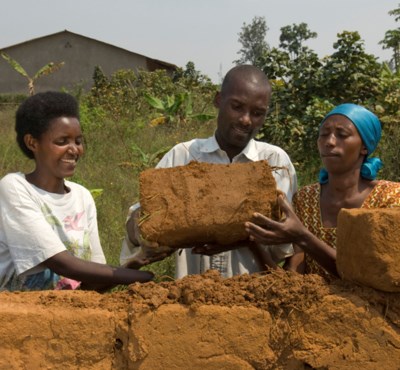 Emmanuel, killed and maimed the families of these woman. In addition he killed 15 people. He cut off Alice’s hand and killed 5 of Agnes’ family including her mother. Today, they teach forgiveness and reconciliation and work together building homes for those in need. Photo by Philip Maher for GuelphToday.

Many who committed offences during the genocide have asked forgiveness from their communities. Astonishingly, they have received it. Men who hacked off the hands of women and then went on to kill their sons, have become stepsons, helping them to live their lives without hands. Such an example of enormous forgiveness is a model rarely seen elsewhere on earth.

There’s a popular notion that the world needs more love, but what the world really needs is more forgiveness. Forgiveness is love applied. We need to offer it to one another every day. We need justice for those who have been wronged but at some point, we have to forgive and move on. Forgiveness is difficult. It is a deliberate decision to surrender the pain and grief caused by someone else.

Lately, it seems like the world is riding on a crazy-train with wars and various forms of retribution. It seems to me that love applied through forgiveness might be the ticket that allows us to disembark.

Are e-scooters an accident waiting to happen?

A Night of Wine and Jazz at the Delta Guelph Hotel!