Loyobo a perfect fit in Guelph

When Courtney McCarthy discovered various forms of exercise and wellness, she wanted to share the feeling
Apr 21, 2019 5:00 PM By: Brianna Bell 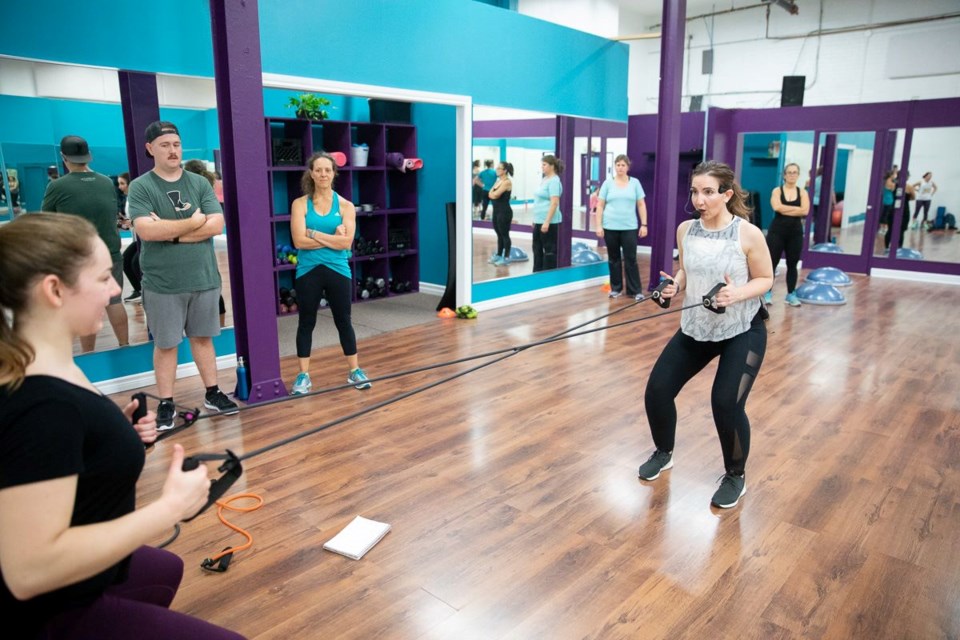 Courtney McCarthy, the Guelph-based fitness instructor and owner of the newly opened Loyobo Fit, is inspiring and encouraging women and men throughout Guelph to embrace their bodies, and get moving for better health and confidence.

Five years ago Courtney was living a very different life, working in Ottawa as a bureaucrat in the federal government. While in Ottawa, Courtney struggled with chronic pain, discomfort, and digestive issues. Her job was stressful and fast-paced, and it was running her ragged.

“I tried every diet and fitness trend. I was unhappy with my body and myself,” Courtney said.

After quitting her job, the University of Guelph alumna decided to return to Guelph. Shortly after moving back, she decided to try a Zumba class, a trendy fitness phenomenon that includes movement inspired by Latin dance and music.

Zumba unleashed a new side side of Courtney, who felt more confident; she started trying different exercise formats, from lifting weights to yoga. Inspired by her Zumba instructor, Courtney decided to become a licensed Zumba instructor herself.

“I wanted to give other women that same feeling that I had,” said Courtney, who went on to get other fitness licences, teaching classes at various studios and gyms around Guelph.

After walking into one of the gyms that she taught at, and finding posters encouraging members to hunker down and get fit for bikini season, Courtney realized it was time to try something new.

“I didn’t even have that body, and I was teaching 20 hours per week,” said Courtney, who found the posters discouraging and disheartening.

She decided to start something completely different. She wanted a gym that was transparent, with no sneaky fine print, or high-pressure sales tactics. Her vision was to create a space that wouldn’t be about getting a bikini body, or any kind of body. She wanted to create a place that was welcoming and inclusive for all, that felt comfortable to walk into, no matter your level of fitness.

At the end of 2017, Loyobo Fitness was launched, and the gym’s permanent location opened in August 2018.

“Loyobo, it stands for Love Your Body,” shared Courtney, who gets a kick out of others trying to pronounce the name. (I’ll admit it — I stumbled!)

She shared that the hope is through her positive messaging and transparency, that Loyobo Fit can play a positive role in changing the fitness industry standard, and shift the mindset of members toward embracing their bodies.

“Everyone talks about energy and how we’re welcoming and friendly,” said Courtney, who now has more than 80 members at the gym, and four fitness instructors.

Courtney added that starting Loyobo Fit has been one of the biggest challenges she’s ever faced, but the positive feedback and encouragement have kept her motivated.

“Even I have those moments of insecurity, wondering if I’m doing the right thing. But hearing from our members, and that they’re feeling good enough, and that their bodies are good enough has been awesome,” said Courtney

Loyobo Fit offers a variety of classes, from Pilates, yoga, Mind Body Unwind, Zumba, Body Burn, and more. Every Friday Loyobo brings in talent from the community, and offers a Happy Hour class in many different formats, including Afro-Tribal Dance, Hawaiian Hula, Square Dancing, and Burlesquercise.

“There are so many ways to move your body,” said Courtney, and she’s hoping, through Loyobo, that people will discover what it is that makes them feel connected and energized.

Loyobo Fit is hosting an open house from April 23 to 26, and offering two free classes for first-time participants. You can find Loyobo at 199 Victoria Rd. S. in Guelph.

It takes a village to write an amazing column
Apr 7, 2019 12:00 PM
Comments
We welcome your feedback and encourage you to share your thoughts. We ask that you be respectful of others and their points of view, refrain from personal attacks and stay on topic. To learn about our commenting policies and how we moderate, please read our Community Guidelines.