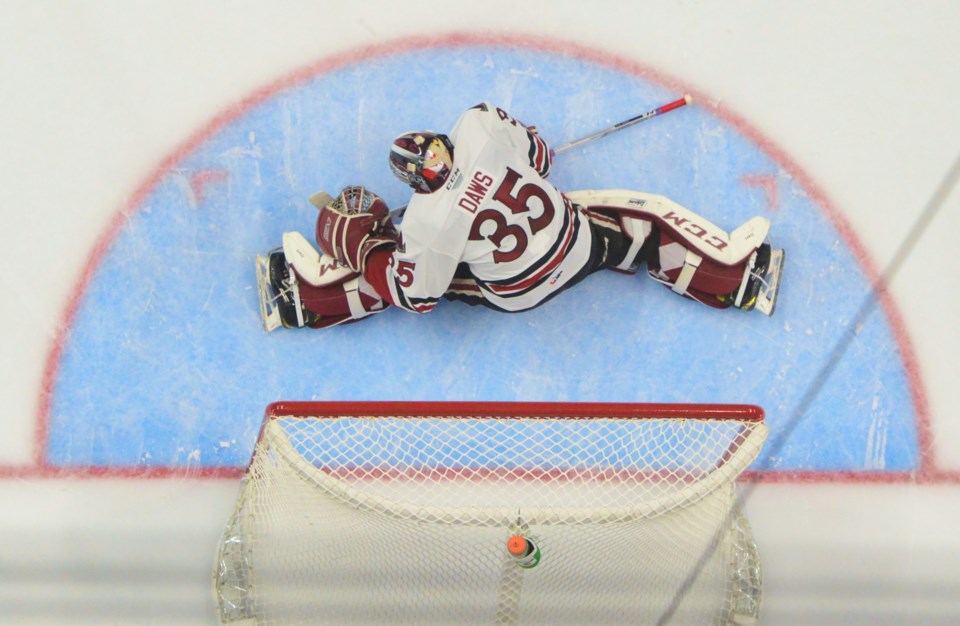 You’re probably not going to like this column. This is tough hockey love, Saxon on the Storm style.

Because if you are reading this column you are more than likely a Guelph Storm fan, and this column is about the harsh realities of this season.

As it’s written, the Storm sits a point out of first place in the Western Conference.

It’s been a remarkable opening third to the year, one that has far surpassed expectations and one that has gone well beyond the point where it can be considered a fluke.

They have earned their status. They are a good team playing a good system and getting great goaltending.

Can they continue this pace? No reason to believe they won’t.

That’s not the issue. The issue is that there are at least three teams in the West that are going to be making — or continuing to make — deals that will make them older and better. London, Saginaw and Flint will be stocking up.

Then there’s the east, where Ottawa, Peterborough, Sudbury and Oshawa are all excellent teams.

That leaves Guelph in a precarious position: they are as good as anyone right now, but what do they do moving forward? It’s a situation made even more complicated by the fact they don’t know if 19-year-old stars Pavel Gogolev, Nico Daws and Cam Hillis will be back as potential overage players next season. All could be signed and turn pro. Or they could be back in junior.

But decision time is coming. The OHL trade deadline is six weeks away. A plan is almost certainly in place by the team.

Stand pat: Ride it out and see where this group takes you, see how far into the playoffs you can go, keep the older players, let the young players benefit from a round or two from the playoffs.

Sell: Let this team ride the wave until the trade deadline, put Hillis, Gogolev, Daws, Fedor Gordeev and Cedric Ralph on the open market and see what they might bring. With so many buyers out there, it could be a significant haul.

The downside: you are tearing up a good team, you are pissing off fans who are thoroughly enjoying a successful team, owners potentially lose some playoff revenue and for some it would be seen as a betrayal to sell when things are going so well.

Buy: There could be an argument to be made that the Storm is a very good team so why not try and add a couple of older players to get better? As they say, you don’t get close often in this league.

But you don’t put one toe in the water in the OHL, you’re either in or you’re out. So adding a couple of mid-range players in exchange for draft picks is really pointless. You either add the quantity and quality of players that would help you keep up with the Joneses or you stay the course on a rebuild.

So unless you’re willing to empty the draft pick bank and trade two or three of the team’s young players, buying is not the option.

Everyone will have different opinions on this. But it’s key to remember that the league as it stands is not the league as it will be in six weeks when the trade deadline hits. Base your thoughts on that reality, not the current one.

My choice? Sell. But only if the return is significant enough. Don’t give anyone away just because they won’t, or might not, be back next year. You will likely get one of the three back for sure.

The assets are too good to sell low.

Guelph Storm will likely resist temptation and stay the course on the rebuild
Jan 3, 2020 2:41 PM
Comments
We welcome your feedback and encourage you to share your thoughts on this story. We ask that you be respectful of others and their points of view, refrain from personal attacks and stay on topic. To learn about our commenting policies and how we moderate, please read our Community Guidelines.