Trying to keep up with the Joneses just doesn't make sense with so many teams looking to add players
0
Jan 3, 2020 2:41 PM By: Tony Saxon 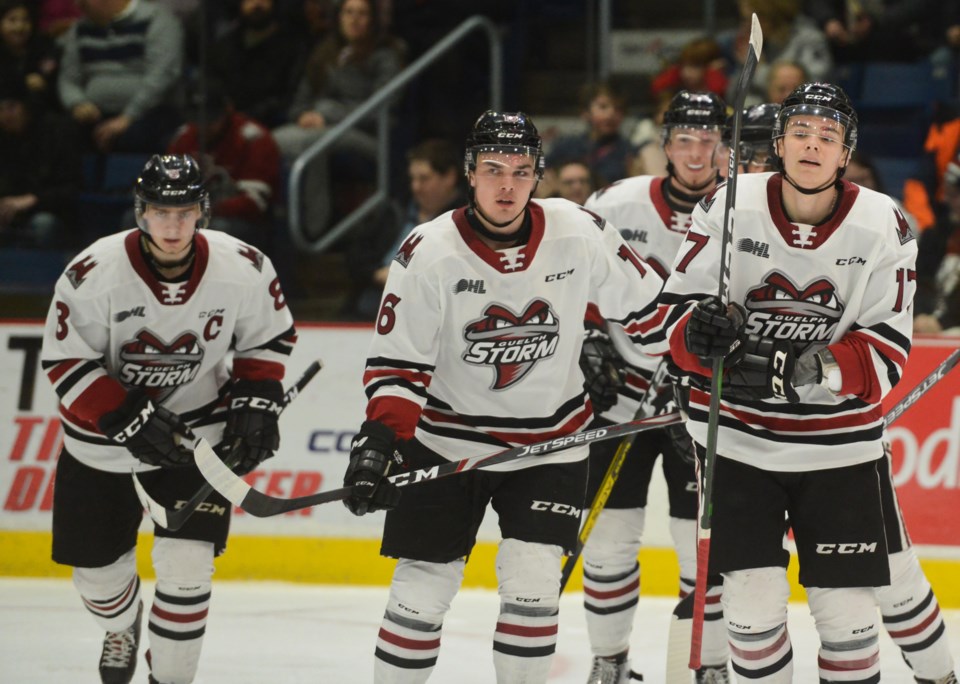 Pavel Gogolev, right, and his Guelph Storm teammates head back to the Storm bench after a recent Gogolev goal. Tony Saxon/GuelphToday file photo

George Burnett is in the driver's seat.

With the OHL trade deadline just around the corner, the Guelph Storm is in a great position.

A surprising first half has the team in first place in the West. They have one of the top offensive lines and they have the best goaltender in the league. Then they got handed Markus Phillips, back from the Los Angeles Kings and a player who would be the number two or three defenceman on any team team in the league.

No one would really blame Burnett for doing nothing at the trade deadline.

By not making any significant move either way you remain a very competitive club and you don't sacrifice the future.

The gift of Phillips also means an overage will be moved that will make the team better now or down the road and you didn't have to compromise the current first place squad to do it.

But to its credit, the Guelph Storm had a plan heading into this season and it doesn't plan on waivering too much from that plan. Nor should they.

Develop a young core, focus on the 16, 17 year olds, plus the next draft, and aim at being a competitor in two years (remember, it's next year that this team was supposed to bottom out on the rebuild, not this year).

Problem is for many, at least on Jan. 3, they are a contender. Question is, will they be one on Jan. 11? Competitive? yes. Contender? not likely.

The OHL landscape you are currently looking at is not the one that is over the horizon. It is the calm before the storm. The battlefield before the bullets start flying.

Two teams in the east (Peterborough and Ottawa) and two in the west (Saginaw, Flint) will almost certainly be adding players. Kitchener, London and Sudbury could also be buyers at some level.

People will be overpaying. They always do.

Unless they made the highly unlikely move of adding significant players at the deadline, Guelph will likely be a team fighting for home ice as the season progresses.

As the deadline nears, and other teams make parallel moves, thost offers will likely increase. Guelph shouldn't be trying to keep up with the Joneses, but other teams certainly will be.

A more likely scenario obviously sees them moving an overage (whoever brings the biggest return) and weighing the offers that are rolling in for the team's desireable crop of 19 year olds: Nico Daws, Cam Hillis, Pavel Gogolev and to a lesser extend Keegan Stevenson and Eric Uba.

I see one or two of that group being with a new team after the deadline.

It's highly unlikely that none of them will be moved. We call this the Bertuzzi/Dickinson factor.

The market is just too hot right now and too many teams need to add players. No one is bowing down to a runaway leader like seasons of the past. No team, even if it adds a couple of players, is a clear favourite to win it all.

Like the mall on Boxing Day, having something to sell when people have money to buy can be a great position to be in sometimes.

If this was a season that the OHL was hosting the Memorial Cup, and two Ontario teams were getting berths, I would be more likely to say Guelph should look to add one or two key players.

But it's not, and Guelph would be taking a huge risk by mortgaging the future in this competitive market. To trade a host of picks and two or three young players just to be one of five or six teams in the mix would be foolish.

Yes, they are a really good team, but they don't have the depth or resources to make the kind of trades they did last season.

Better to stay the course, cash in on a player or two, and see where this team can take you moving forward without mortgaging the future.

Guelph Storm losing streak provides a reality check
Jan 31, 2020 2:30 PM
Comments
We welcome your feedback and encourage you to share your thoughts on this story. We ask that you be respectful of others and their points of view, refrain from personal attacks and stay on topic. To learn about our commenting policies and how we moderate, please read our Community Guidelines.