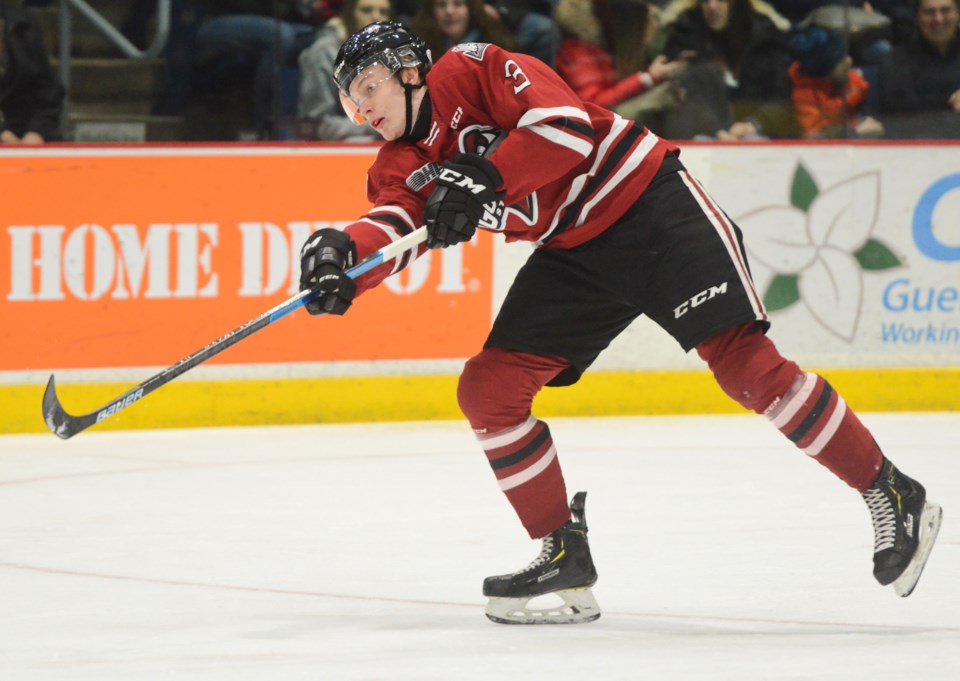 The maroon and white of the Storm is the sixth different jersey the Czech Republic native has suited up in.

Acquired at the trade deadline form the North Bay Battalion, he played most of the season in Finland, playing for the Tappara pro team, Tappara’s junior affiliate, two games on loan to LeKi, one game with the Battalion, the Czech Republic at the World Juniors and now Guelph.

A fifth round draft pick of the Washington Capitals in last June’s NHL draft,, Hăs turns 19 on Feb. 2.

He said he was looking to come over to North America and get used to smaller rinks and play more games. Hăs played in just 20 games in Finland this season.

“I think it was a good move to play a lot, get the ice time and just get better,” said Hăs.

“The ice here is smaller and everything is faster and that’s good for hockey, to be under pressure the whole time. That’s a good thing.

“Guys are near you quicker and you’ve got fast paced. It’s better for me. In Finland it’s more about skills and stuff like that. Play the fast game and passing.”

Hăs didn’t know too much about Guelph before he landed here. Google helped.

“I was just watching the other guys that play in the OHL from Czech, so watch them play against Guelph. Looked like a good team, that’s the only thing I knew before,” he said.

As for the team’s current funk that has seen them lose seven straight games, he says the team just needs to get back to doing the things he saw on video from earlier this season, when they were on a roll.

“I think that the guys played well before I came so we just need to get back to the game that they played before. I’ve seen some videos and it’s a lot different,” Hăs said.

“It’s going to get better.”

Storm coach/gm George Burnett is thrilled to have Hăs in the fold.

“I think he’s going to be fine. He’s real steady, solid, he can shoot the puck well,” Burnett said.

“I’d like to see him get it a bit more on the power play. I think he and Feddy (Fedor Gordeev) can be a real nice pair together, or he and Danni (Daniil Chayka).

“He’s real heady and very poised. I think we’re going to like a lot of what we see from him over the next year and a half.”