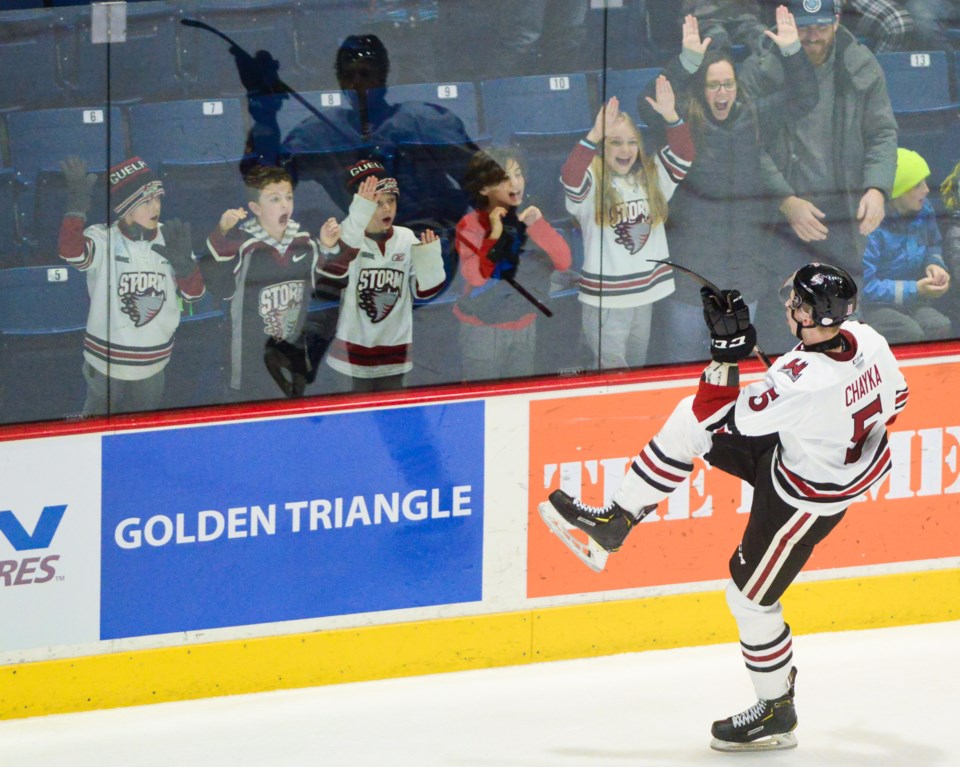 Let us count the ways the Guelph Storm are (with all due respect to the Windsor Spitfires) the surprise of the young OHL season.

Entering Friday’s game on a nine-game winning streak and just two back of Windsor for first in the Western Conference, the team that is in rebuild mode was an honourable mention in this week’s CHL top 10.

And 20 games in is a pretty decent sample size.

It can’t continue at this pace. Teams are going to be loading up. The Storm will be faced with some tough trade deadline decisions.

But Storm fans should enjoy the ride, they don’t come along like this very often.

The reasons for it:

(1) Nico Daws: Alright, one player does not a team make, but Daw has come out of nowhere to be arguably the best goaltender in the OHL this season. The numbers are superb, he hasn’t been pulled all season and only three times has he allowed more than three goals. Those are pretty magical numbers.

Daws has put himself on Hockey Canada’s radar, the radar of teams looking for a goalie at the trade deadline and, if he continues his strong play, the radar of NHL teams.

(2) Commitment To Defence: The Guelph Storm have allowed the fewest goals in the OHL this season. It should be noted that in the 21 years that online statistics are available, Guelph has never led the conference in fewest goals, never mind league.

To get there you obviously need the goaltending, but it’s more than that. With a relatively inexperienced defence there is a team commitment to the defensive side of things that has been quite interesting to watch.

Seven goaltenders have faced more shots than Daws, who is still averaging 36 a game, but the team is playing a very strong defensive game most nights.

And remember, the Storm had hoped to have a Boston Bruins draft pick on the blueline before his Russian club refused to release Roman Bychkov.

(3) Trades: Josh Wainman and Michael Bianconi weren’t exactly household names, but both have been excellent since coming to Guelph. They’ve combined for 13 points and a plus-9 rating. Both think defence first and both move the puck quickly and efficiently. They've provided depth to the blueline and allowed the youngsters to play in the appropriate situations.

(4) The Kids Are Alright: The Storm’s group of youngsters (11 rookies including a 19 and 18 year old) might not be racking up the points, yet, but they have played a huge role in the winning streak.

Whether it’s Cooper Walker with two huge assists, Jacob Roach’s dogged determination or a fourth line that kept Kitchener pinned in its own end on several shifts, they are doing the things that help teams win, even if those things don’t always show up on a scoresheet.

(5) Playing To Potential: A healthy Cam Hillis and a first-line Pavel Gogolev have been pretty unbelievable, totalling 64 points in 19 games. Daniil Chayka is emerging as one of the best 17-year-old defencemen in the league and Fedor Gordeev is carrying a monstrous workload most nights.

Keegan Stevenson and Cedric Ralph continue to be a coach’s dream of consistency, flexibility and reliability.

Age and experience considered, it would be hard to say any of the Storm players are underperforming right now.

Guelph Storm decides to stay the course at OHL trade deadline
Jan 10, 2020 2:54 PM
Comments
We welcome your feedback and encourage you to share your thoughts on this story. We ask that you be respectful of others and their points of view, refrain from personal attacks and stay on topic. To learn about our commenting policies and how we moderate, please read our Community Guidelines.

Save the tax on all brake repairs February 1st - February 28th, 2020
Oriental and Area Rugs - Does your rug need a freshening up?