The stick Paul Fendley played with the night he suffered a mortal injury at Guelph Memorial Gardens was recently found in a basement and it resurrects many emotions
0
Oct 11, 2019 1:49 PM By: Tony Saxon 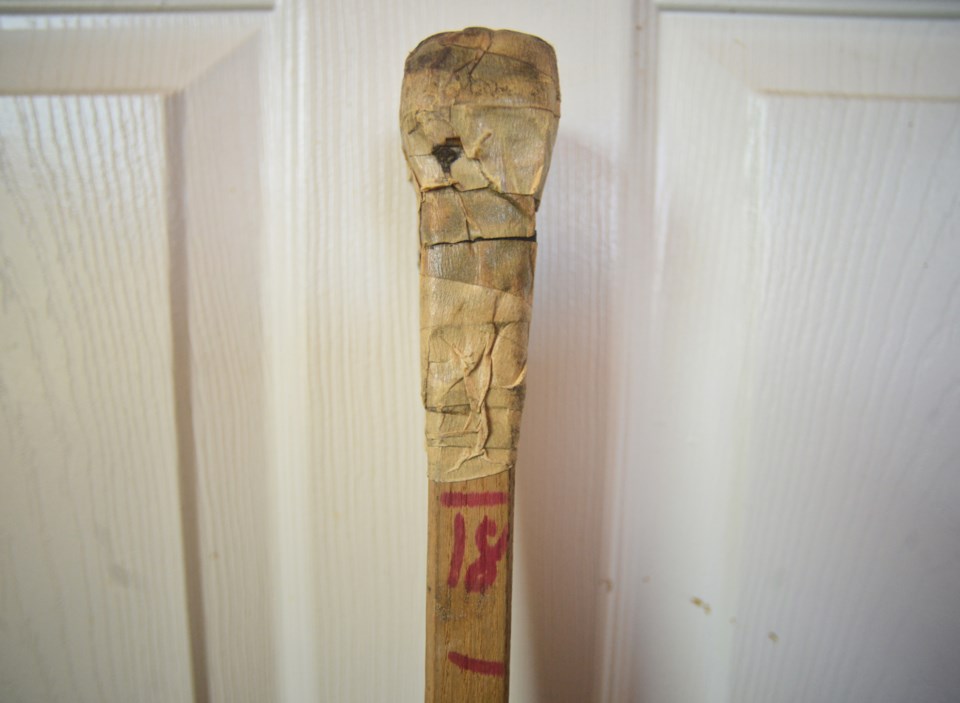 The hockey stick Paul Fendley was using the night he died. Tony Saxon/GuelphToday

Someone walked into a friend’s office the other day and said: “Check this out.”

It was an old wooden hockey stick.

It is the stick of Paul “Fin” Fendley, the only player to have his number retired by the Guelph Storm organization and the only person ever killed by an on-ice hockey incident in Guelph.

Fendley died in May of 1972 the night the Guelph CMCs captured the Centennial Cup. He was checked mid-game, his helmet flying off and his unprotected skull crashing to the ice. He never regained consciousness and died in hospital two days later.

The stick was gathered off the ice by a CMCs staff member and has spent the past 47 years in a basement, recently discovered by a son who knew exactly what it was.

Some find the hockey stick ghoulish. Or eerie. I find it to be neither.

To me it is as honourable a piece of Guelph hockey memorabilia as there is. A reminder of many of the good things about the game of hockey, not of a tragic loss.

Twelve years ago I wrote a story about Fendley. The person, not the hockey player.

I talked to family, fans, friends and teammates.

It was an important history lesson for many younger hockey fans in Guelph and helped fuel a gracious decision by the Storm to retire his number in a moving ceremony that remains one of the highlights of my career.

Now, every time I enter the Sleeman Centre, I look at his banner hanging from the rafters and think of a 19-year-old chasing his dreams, no different than the teenagers that play beneath him night after night.

Seeing his stick (I refused to hold it for reasons I’m not yet sure of) saddened me slightly, as it should, but it also did what the banner in the rink does for me every time I’m there: it served as a constant reminder of the innocence of youth, the chasing of dreams and the passion for a game that Fendley shared with all junior hockey players.

To me that stick is a sign of hope, not loss. Of passion, determination and faith. Of brotherhood. Of bonding. Of growing up.