Keep it brilliant, keep it simple

This week in Urban Cowboy, Owen Roberts discusses a philosophy of one of the world’s most high-tech farm machinery companies and its belief that modern farmers don't have time for complicated machinery
0
Feb 11, 2018 10:00 AM By: Owen Roberts 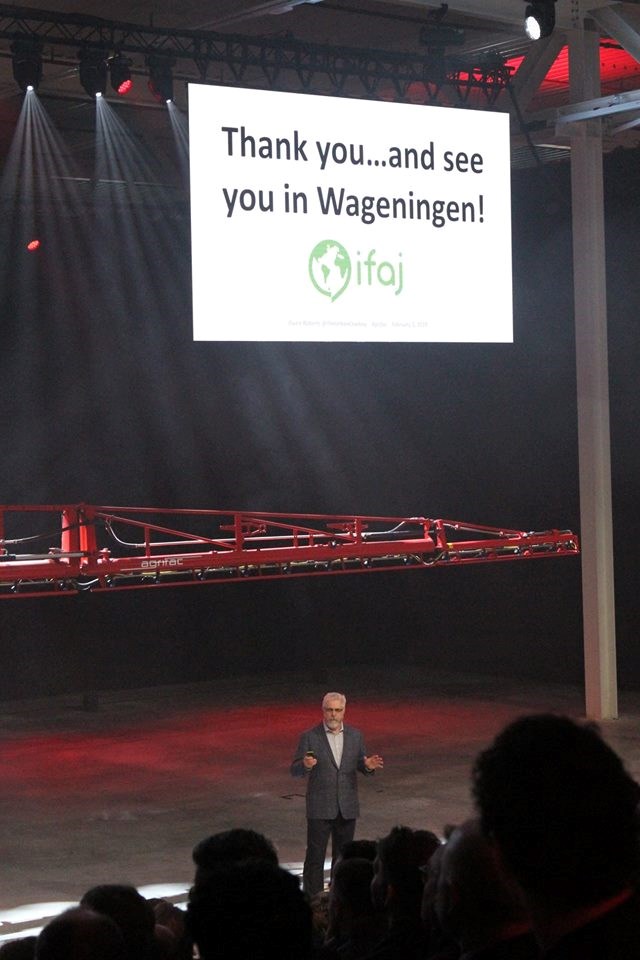 You never know from where the next global trend is going to emerge. But here’s an agricultural direction that one progressive and rapidly growing Dutch machinery company thinks farmers and others will embrace: that is, keep it brilliant, and keep it simple.

Agrifac Machinery, based in lovely Steenwijk, about two hours by train from Amsterdam, rolled out the approach earlier this week at the grand opening of its new state-of-the-art manufacturing plant there. I was a guest speaker, focused on the media’s role in knowledge mobilization.

Like the other 400 participants, I saw the slogan 'Brilliant Simple' often repeated.

It struck me as curious. Why would one of the world’s most high-tech farm machinery companies, known for its massive, ultra-modern self-propelled sprayers, associate the term “simple” with its technology?

CEO Peter Millenaar stepped up to the microphone to explain.

The way he sees it, in farming, there’s no time for anything to be complicated. Today’s most advanced or “brilliant” farm technology must be intuitive and efficient for those who use it.

Here’s another simple fact. Globally, we need more food, because we have more people.

However, no matter how many people we have, farm labour shortage is a chronic problem. Hardly anyone wants to do manual work.

So farmers need mechanization to operate at increasingly higher levels, and operate with relative ease. There’s less time than ever for unravelling mysteries that shouldn’t exist in the first place – such as, how do you make this piece of machinery run?

And still one more plus for simple technology is how it can help enhance farmers’ quality of life.

We know that other professions – veterinarians, for example -- are pushing back at working unreasonably hard. And while that’s a subjective measure, there’s no question farming is a demanding profession. Even though it’s made easier through automation, farmers struggle with health issues, particularly mental wellness. They don’t need anything else, like incomprehensible new technology, to add to their burden.

Agrifac’s simple-is-better mantra is reflected in new features in its machinery’s cabs. These include easy-to-use multi-capability joysticks and consoles, field monitors with unprecedented clarity, and precision sprayer systems with cameras that can spot individual weeds when the machine is in motion in the field.

As it approaches those weeds, nozzles are activated so herbicides are applied only on those weeds, instead of blanketing the entire field. Millenaar likens that selectivity to sick humans – when illness strikes, only the ill in the population need to be treated, rather than everyone. Unnecessary treatments are not only costly, they can also lead to resistance from herbicides and antibiotics.

So, that’s Brilliant Simple in a nutshell.

Now, I’m wondering if farmers can use the same approach to explain agriculture to an increasingly scrutinizing public. On top of all the other things farmers do, they’re being called on more than ever to explain how farming works and why people should trust them.

They have a great opportunity next week. Canada’s Agriculture Day, the second one ever, takes place Feb. 13. It’s purposefully chosen in the dead of winter to remind consumers that farmers are active year around.

Agriculture advances from knowledge created through research. It begins the field, the lab or the factory, where farmers, researchers, technicians and others create knowledge. Then someone needs to put wheels on it. Usually, that falls to agronomists or advisors, researchers who have some communications savvy, and agricultural media. Media have long played a role in mobilizing research findings to farmers.

Who uses that knowledge? Typically, other farmers, other researchers, business and industry, and government. Society is the ultimate benefactor. But society needs help understanding the process that helps ensure farmers produce safe, economical, wholesome food.

Peter Millenaar is right. Keep it simple, and the brilliance behind agriculture will shine through.