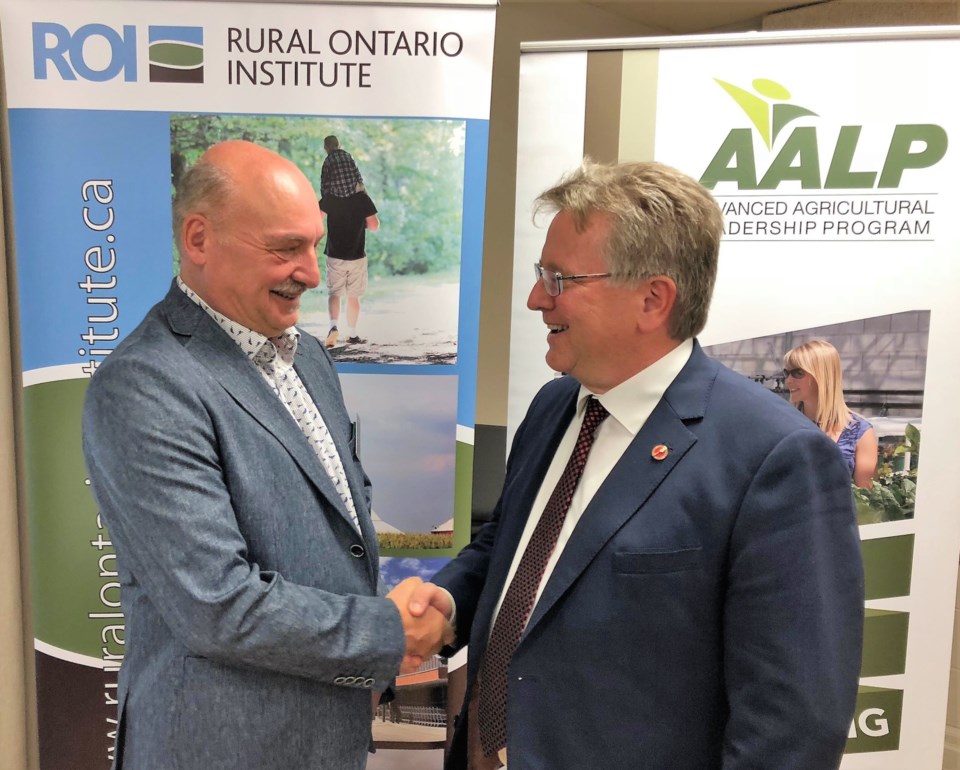 The Rural Ontario Institute has become the go-to organization for all things rural in the province – even though less than a decade ago, it didn’t exist. Last week, its chief executive officer since its inception, now-Senator Rob Black, bade adieu to the organization at its 2018 annual general meeting.

The institute was formed when the Centre for Rural Leadership (of which Black was executive director) and The Ontario Rural Council came together as the Rural Ontario Institute in 2010.

In his outgoing address, Black, who was sworn in as a Senator in February, praised the institute’s staff for its effectiveness.

“I firmly believe the work that the staff team has contributed to has made a difference to leadership and community development in rural Ontario and to the agriculture and agri-food sector here in the province,” he told the 100 institute sponsors, partners, supporters and board members gathered for the meeting at the Marden Community Centre, just outside Guelph.

The institute’s mission is to build vision, voice and leadership for strong and vibrant rural and northern communities. As part of its role, it delivers the Advanced Agricultural Leadership Program (AALP), which over its 34-year tenure has equipped more than 450 Ontarians with leadership skills to strengthen the province’s agriculture and rural sector.

The current 18 participants have completed half of their eight seminars, and are travelling to Texas next month for their North American study tour.

The Ontario Federation of Agriculture is one of AALP’s founding partners.

“We are proud of the Rural Ontario Institute on eight years of developing strong, confident leaders who are strengthening our agriculture industry and rural communities,” federation present Keith Currie said to members in the institute’s annual report, released at the meeting. “We know the Rural Ontario Institute works tirelessly to get rural and agricultural issues on the map through effective stakeholder engagement, training and leadership skills and youth engagement.”

The institute carried out a variety of other activities in 2017-18. These included delivering the Ontario Soil Network, a one-year pilot program to connect and learn how to better support what it calls “soil first” farmers. As program participants, 30 Ontario farmers were involved in a two-day workshop and a 10-month leadership challenge. The latter included field days, on-farm research, speaking engagements with agricultural groups and informal shop talks with other producers.

This past year, the institute’s long-running fact sheet series looked at topics such as demographics housing, income levels and income sources for rural Ontarians. As well, for the third year, the institute ran a youth engagement showcase to highlight rural youth leadership activities.

Norm Ragetlie now assumes the helm of the institute, which operates on a budget of about $950,000 a year.

Black, a University of Guelph graduate, told meeting participants that in the Senate he will be part of the standing committee on agriculture and forestry. Canada is facing huge issues with challenges to trade and supply management, which he’ll undoubtedly hear through the summer now that Senate has risen (temporarily ceased operations) for the season and Black is home in Fergus.

Indeed, on Friday following  the institute’s meeting, the senator toured an area chicken farm, which as a supply-managed commodity will be significantly impacted if US trade negotiators succeed in gaining more access in Canada for American poultry.