Urban Cowboy: Guelph readies to become the Silicon Valley for agriculture and food

The huge federal funding announcement last week at the University of Guelph, for a seven-year, $77-million initiative called Food From Thought: Agricultural Systems for a Healthy Planet, is being heralded as a turning point in Canada for the next agricultural revolution — the digital revolution — which will be driven significantly by the coming together of big data and modern farming. 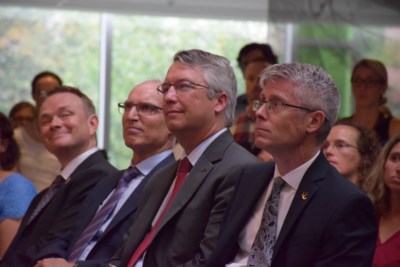 In fact, the university’s scientific lead for the project, Guelph Food Institute director Prof. Evan Fraser, says Food From Thought stands to make Guelph the Silicon Valley of agriculture and food, and bestow new jobs and resources upon the area.

The project builds on some assets that are uniquely the University of Guelph’s, and have given it an established platform on which to nurture such an agricultural revolution.

The first asset is the partnership between the university and the Ontario Ministry of Agriculture, Food and Rural Affairs (OMAFRA), a formal arrangement that seizes on the historic connection between the two, going back some 150 years to the university’s founding agriculture, veterinary and home economics colleges.

The partnership’s importance cannot be overstated for the university, and for agriculture and food in Ontario.

The ministry dedicates million of dollars every year -- $54 million in 2015-16 -- to the partnership, to fund agriculture and food research and development, laboratory services and training and education at the University of Guelph. The partnership also supports the province’s largest network of research stations, dedicated to livestock and field crop development, managed by the university for its researchers’ use.

In 2017, the partnership will celebrate its 20th anniversary. Through the years, it’s catalyzed jobs and spin-off companies, new crop varieties, healthier animals, safer food and a better environment. It promotes a cohesive, progressive research environment that in agriculture and food has no parallel in Canada...in fact, most people who know the sector, say there’s nothing like it anywhere in the world.

Independent impact studies have shown the partnership generates more than $1 billion a year in economic activity in Ontario. The stability it gives the agriculture and food sector in Ontario helped make the pursuit of Food From Thought possible. 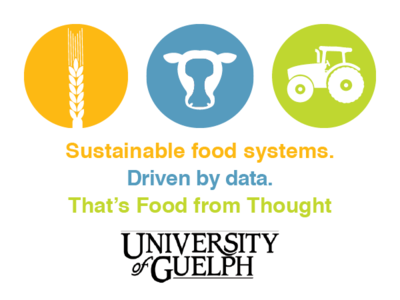 And so did newer assets. One that comes immediately to mind – and one that is an intrinsic part of Food From Thought -- is the Biodiversity Institute of Ontario (BIO), at whose headquarters the project’s announcement was made.

BIO is home to a game-changing technology called DNA barcoding, sometimes referred to as the “Barcode of Life.” DNA barcoding uses a very short piece of DNA to accurately identify a species, similar to how a supermarket scanner uses the black stripes of the Universal Product Code.

It was pioneered under the leadership of renowned University of Guelph scientist Paul Hebert. Now, he and the extraordinary team he’s assembled are moving closer to their goal of “being able to identify any species, on the spot, in an instant, anywhere on the planet.” BIO is part of an international alliance of 25 nations dedicated to a new level of species identification, driven by the fact that 80 per cent of all species in the world are still unknown.

Over the past few years, you’ve read or heard high-profile stories about its work in species identification, particularly as it pertains to food fraud, and especially in the way lower-priced fish is being passed off as higher priced species.

In agriculture and food, DNA barcoding has several applications. In the field, it can lead to accurate pest identification, which is crucial for farmers trying to figure out how to protect their crops and livestock from insects, bacteria and fungi. Off the farm, it can help guarantee the authenticity of Canadian exports, to prove they are what they say they are, and what they say they aren’t. It can also identify problems like pathogens or toxins earlier, and allow faster and better responses to food safety threats, protecting consumers and exporters.

The huge amounts of data being generated by BIO and other activities on campus have prompted Guelph researchers to connect with those who have supercomputing capacity, and what’s called “big data” expertise. Guelph entered this field early – and uniquely, for its biological applications -- through its involvement with a supercomputing network called the Shared Hierarchical Academic Research Computing Network (SHARNET), in which Canadian universities share and join their computing capacity.

SHARCNET consists of clusters of computers linked by dedicated fibre-optic connections. These clusters work together and allow computing to be hundreds or thousands of times faster than a regular desktop computer, completing calculations in a few hours that might take months to run otherwise. As far back as 10 years ago, the network had already received nearly $50 million from the province, and was being called one of the most powerful supercomputing installations in the world. 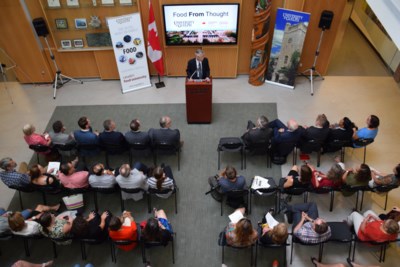 U of G agricultural research leaders were on hand for an announcement that will fuel research aimed at helping the world grow food and sustain ecosystems. (Rob O'Flanagan/GuelphToday)

Building on that foundation, Food From Thought has attracted IBM Canada as a key industry partner. Its role will include tools and training for data analytics, plus securing cloud-based storage for the huge amount of information gathered through supercomputing, and from precision agriculture technology that has already started appearing on farms.

Fraser says big data will improve the understanding of the complex interplay between farming practices, the genetic potential of our crops and livestock, and the environment.

“We can drive a paradigm shift in our understanding of food systems,” he says. “By looking from producer to consumer, across spatial and temporal gradients and from ecosystem to molecule, we will create the analytical platform for this digital agricultural revolution…we will shift science by creating models that will anticipate how ecosystem services, pathogens [and more] may respond to factors like human interventions or climate change.”

The University of Guelph has known for years that something unprecedented like this had the potential to evolve. Its expertise has been constantly building, with the OMAFRA partnership and with research centres and institutes related to areas such as animal welfare, zoonotic disease and controlled environments, among others. Mostly recently, it oversaw the creation of a food institute (Fraser is its director) to serve as a portal and focal point for food research on campus. It’s involving students through another unique initiative, called Feeding 9 Billion, to help develop new ways to meet the world’s food demand.

So now, through the Canada First Research Excellence Fund that funded Food For Thought, Guelph has a new injection of resources to support graduate students, outreach and of course a whole array of research activity. It has all the pieces to fulfill what Hon. Kirsty Duncan, Minister of Science for Canada, describes as the kind of research that “will make the country stronger.”

Aggies and non-Aggies can rally around it with equal enthusiasm. This is our country’s entry into the agricultural digital revolution.