Cooper said the recent live stream performances have helped to keep her focussed, offering her time she may not have otherwise had to hone her singing skills
Apr 22, 2020 7:00 AM By: Kenneth Armstrong 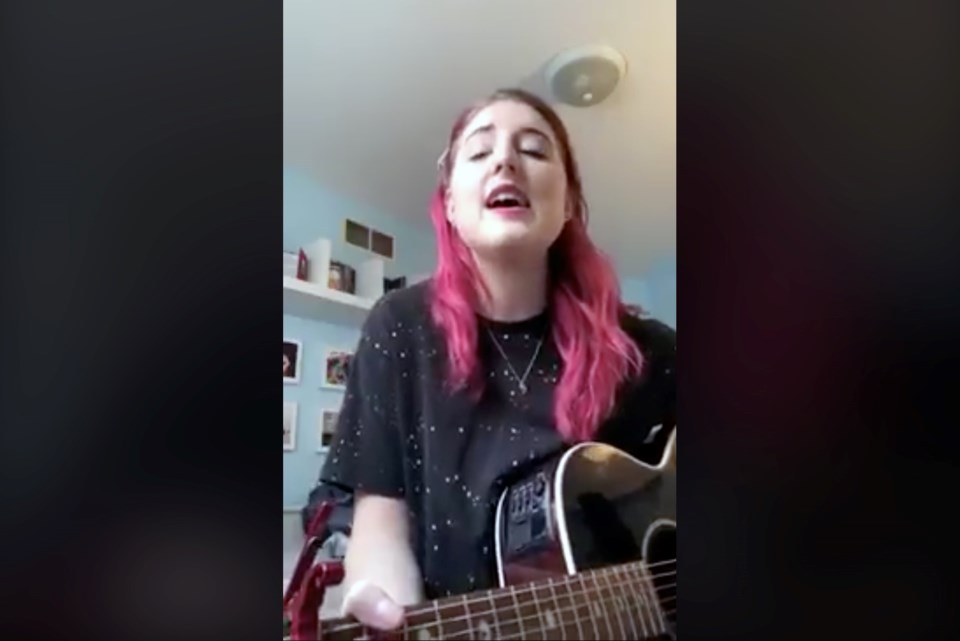 Singer CJ Cooper seen in a screenshot of a recent performance from her home during self-quarantine. Cooper plays a live set three days a week on the Guelph This & That page on Facebook.

If you have been spending some time on Facebook lately and are a member of the Guelph This & That group you may have seen this local performer singing her heart out during self-quarantine.

CJ Cooper is a local singer songwriter who says she had big plans for 2020, but is making the best of her time in isolation by doing a number of free live streamed sessions on the popular local Facebook group.

Like many people around the world, Cooper has been self-quarantined in her south end Guelph home looking for ways to keep herself occupied. She began playing guitar at the age of seven and ate age nine was taking her first vocal lessons.

Temporarily laid off from her full-time job and unable to book singing gigs, Cooper said she has found purpose in self-quarantine by offering free live stream performances three times a week.

She performs on Guelph This & That, a local Facebook group which has almost 10,000 members, offering Cooper a built-in audience she said she might never had access to.

“The admin of Guelph This and That reached out to me at the beginning of the isolation, asking if I had the time could do a couple of live streams,” said Cooper. “I am trying to find a silver lining with this situation and as hard as the quarantine has been, it’s actually helping me to connect with a lot more people than it would have if I had just been trying to book gigs.”

Currently 19 years old, Cooper is a multi-instrumentalist who plays guitar, drums and piano and has so far released one album, with another in the works.

“I did have a lot of great things planned this year, which have kind of crumbled one by one — like everyone is experiencing,” she said. “I just didn’t want to let that overcome me.”

She had been scheduled to sing it at every home game this season, which was to have started in early May before being pushed back due to COVID-19.

“Obviously that’s not happening now, but hopefully if they are back next season they will have me back,” she said.

The Canadian Elite Basketball League has said the opening of the season may happen as early as June, but all City of Guelph facilities — including the Sleeman Centre — are closed until the emergency order is over.

“I wouldn’t know what day of the week it was if I didn’t do these live streams because I do them now on a schedule,” said Cooper. “It’s definitely giving me a sense of normalcy during the quarantine — I figure it’s my job.”

“It’s something I have control over, to use my voice in the community and just have fun with it,” she added.

Cooper has also been adding to her repertoire via requests she receives the people watching the live streams.

“Most of my set the other day was just requests from the 1960s and 70s, which is material I wouldn’t usually dive into, said Cooper. “I think this is strengthening me — not just as a musician because I am learning and trying harder songs — but as a performer because it’s helping me cater to all age groups.”

Cooper said she is receiving positive feedback from people of all ages in return.

“I will do a set list with a Disney song, then a John Denver song followed by Demi Lovato,” she said. “I have moms reaching out to say their kids love listening while the colour at the table, I have had older people saying they love listening on their drives to work.”

Cooper recently penned a song about life during self-quarantine titled Out of the Shadows and has asked her fans to send video of themselves keeping busy during day in and day out for a music video.

“I want it to give people some hope during this time,” said Cooper.

The live streams are currently being performed every Monday, Wednesday and Friday on Guelph This & That Facebook page. Cooper also posts the performances to her professional Facebook page after each session.