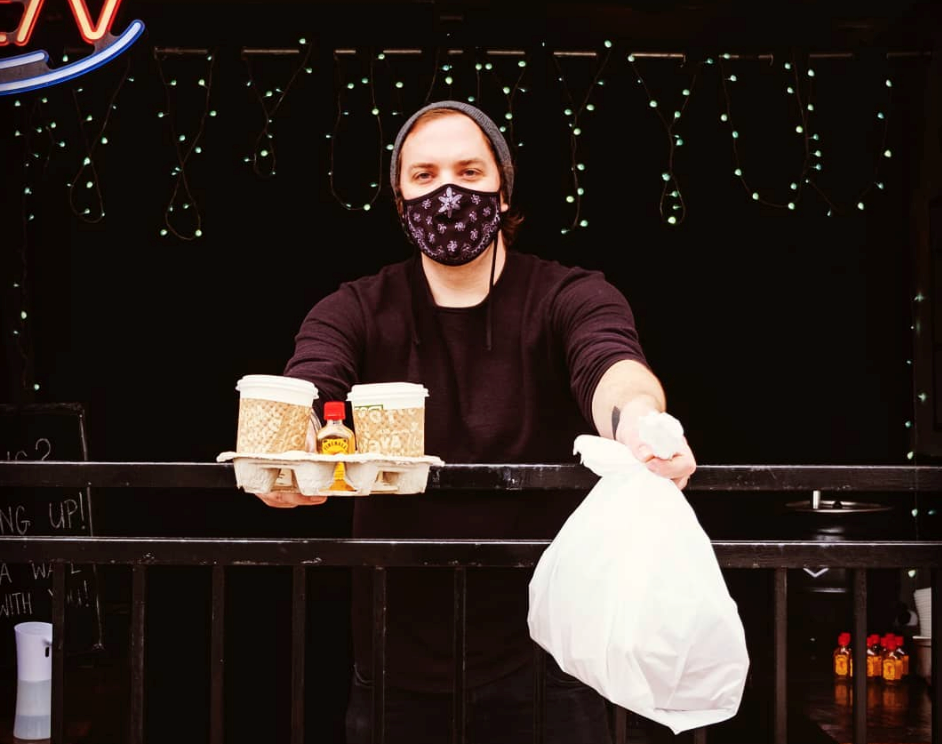 Brandon Rennie in holds a meal in front of Gin Mill on Wyndham Street North.

Starting Sunday evening, if you walk up to the Gin Mill roll-up garage door, you will see the owner standing there, ready to offer a free meal he cooked just for you.

There is no catch.

Brandon Rennie, co-owner of Gin Mill on Wyndham Street North, says he is hoping to help alleviate some of the stress many are feeling by offering a freshly-cooked take-out meal every Sunday starting at 5 p.m. until the food runs out.

Rennie said it was important for him to acknowledge the hardships people are facing, regardless of what they are. Anyone can come and grab a meal if they’re tired, if they don’t feel like cooking, if they are stressed or whatever their reason may be.

“There are no qualifications for coming up on Sunday. We literally want anyone if it's going to make their life a little bit easier to come up and get a meal on me just to alleviate some of the stress,” said Rennie.

He said it's difficult to gauge the number of people who will come to pick up a free meal, but aims to cook at least 50 meals.

“Honestly I'm making as big of a pot as I can make and I’m just going to keep going until it's gone,” said Rennie.

Rennie said service to the community is what kept the business alive during these tough times.

“It was really time for us to give back,” said Rennie.

He plans to kick off the first Sunday with a Moroccan stew with a  choice of different meat toppings. Vegan options will also be available.

He said in the past year, his restaurant missed out on a lot of events.

Rennie has been in the restaurant business for 20 years and he recognizes 2020 to be the most difficult year in the industry.

Gin Mill was operating for seven months before they were told to shut down due to the pandemic the day before St. Patrick's Day.

“We’d already been stocked up with beer and food and then we were ordered to shut down the day before,” said Rennie who later distributed all the stocked items to his staff.

The restaurant later launched a subscription cocktail delivery service where they deliver cocktail kits and post an online tutorial every Friday to walk people through the making of the cocktail.

He said the restaurant wouldn’t have been able to go through this past year without the community and giving them free meals weekly comes from a place of appreciation.

“It was really by the grace of the community to be able to make it this far,” said Rennie.