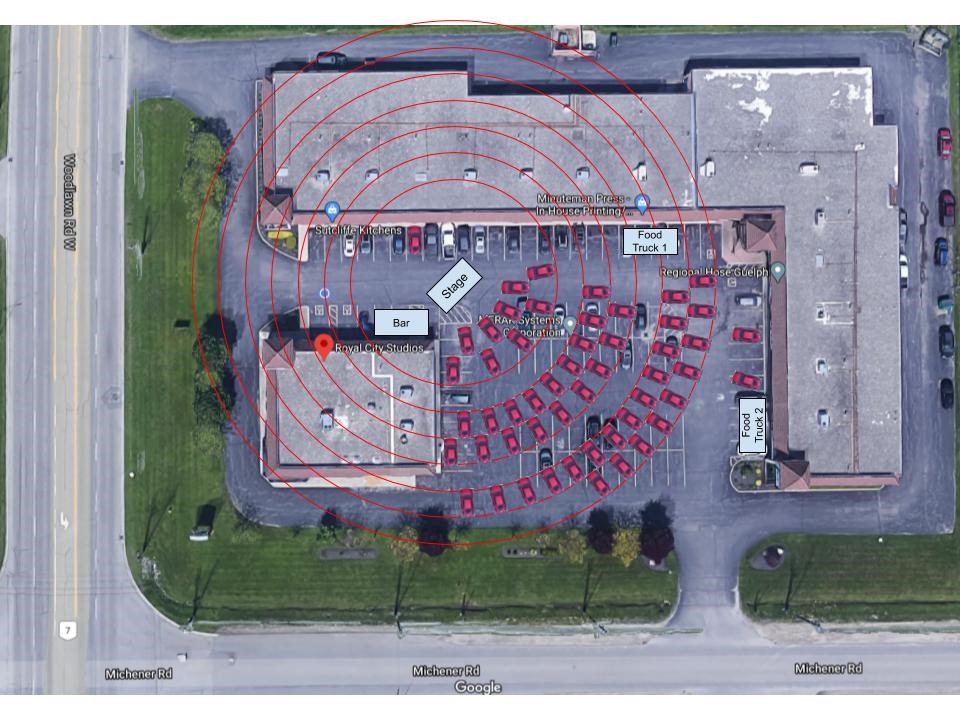 A draft of what the live in concert would have looked like on July 16. Supplied photo

After organizers put hundreds of hours in planning, the Music Lives concert in partnership with Royal City Studios has been cancelled.

The concert on July 16 would have been the first live concert to take place in Guelph since the lockdown to give the city a taste of live music. The show was scheduled to have local talent, food trucks and people in their cars physically distancing allowing a maximum of 50 cars in the Royal City Studios parking lot.

“To have it all fall apart in the last minute like this is pretty tough,” said Jim Duffield, owner of Royal City Studios.

Duffield said the event required liability insurance that would cost nearly $500 which is too much given the costs of the event.

“We’re only maximum going to be taking in $1,000 so if we’re going to pay the band and pay for all the stuff we needed, we wouldn’t be able to earn anything on it,” said Duffield.

“It’s going to cost too much to put on with the insurance.”

“It’s not a hugely lucrative business because musicians are all broke right now,”  said McNeill.

“Especially during the pandemic it’s one step forward, two steps back it seems.”

“I can understand where they might have a concern but in reality, if everyone is locked in their cars basically we’ve got people to make sure it stays that way,” said Duffield.

“If everyone were to rush out of the cars, we wouldn’t be able to control that but the odds of that happening in Guelph are pretty darn slim.”

Duffield said tickets purchased for the show were all refunded.

“A lot of fans are disappointed too,” said Duffield.

“We’re going to see if we can put on a live stream instead and people watch from the comfort of their home but it’s certainly not going to be the same kind of thing as it would be if it were live.”