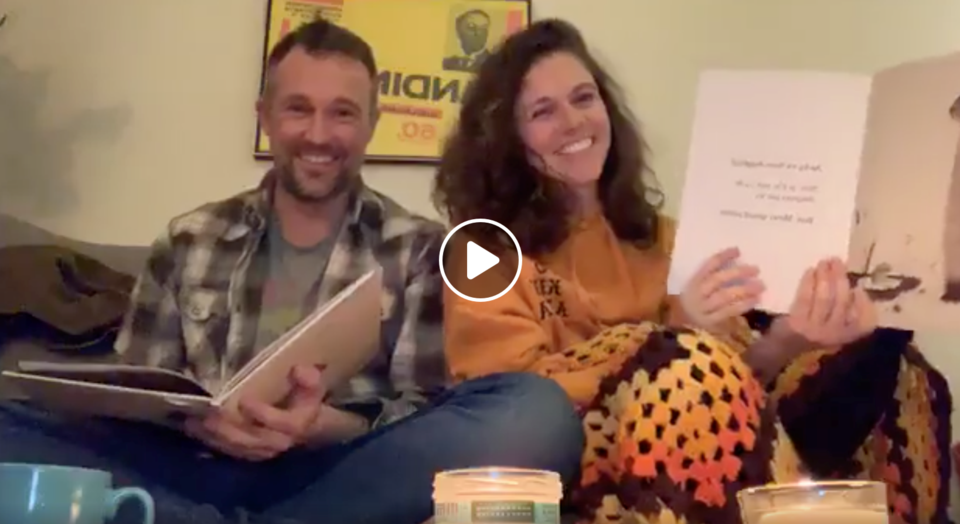 A screenshot of Shawn Benson and his friend on March 23 on Facebook live reading I WANT MY HAT BACK for Bedtime Story with...

While people are isolated in their homes, community members have been gathering online to hear prominent Guelphites read Canadian stories and sing songs during bedtime.

“It’s just a matter of being creative. We’re kind of going back to our roots,” said Alisha Zoethout, co-founder of Bedtime Stories with..., about the initiative which sees the community assemble to hear a people read a story in real-time.

Zoethout said she recalls the joy she would feel as a child when she would listen to somebody tell a story and said she wishes she could have this right now because of the stress and anxiety related to the changing world while it battles COVID-19.

She said the response from the people contacted was extremely positive, with many jumping on board immediately and filling the schedule for the next two weeks.

The first video streamed last night was of actor Shawn Benson and his friend reading I WANT MY HAT BACK — a story of a bear looking for his hat — both in French and in English.

“It was so much fun,” said Zoethout, who saw her eight-year-old delighted with the live storytelling.

“Even the people who didn’t log in immediately, for the live, the views after kept on coming.

Zoethout, who works as a marketing manager for Amy Flowers, a real estate company in Milton, started this group with Coldwell Banker realtor Aimee Puthon. Zoethout said the two felt that their real estate jobs foster a strong culture of giving back to the community and it was something they learned from.

She said the whole idea of virtual bedtime stories came about when she was reading a story to her 8-year-old son.

“We ended up getting into a conversation about Robert Munsch and how I used to go to him at the Guelph Public Library and he would come to our school,” said Zoethout.

“He is the inspiration behind this.”

She said the people reading the stories have an animated personality which is important for storytelling and is encouraging community members to reach out if they want to be part of the initiative.

She said she hopes to continue the live book reading even after the COVID-19 pandemic ends.

“I think it’s so much fun for families to be together for 15 to 20 minutes a night,” said Zoethout.

“The ability to interact on live video and to be able to put your comments in there and said things for people to immediately see then talk back is super important for the kids,” said Zoethout about readers giving shoutouts to children who comment during the live video.

“It’s nice to have that interaction. That human contact virtually.”

Here is the schedule for the next two weeks:

March 28: Carolyn Mills will read A little boy who lived down the drain

Our COVID-19 coverage, like all of our reporting, is provided to our community for free as we believe news should be accessible to all.

Please consider supporting our local reporting efforts so we can continue providing the news you need.