'The heartbeat of downtown is moving a little bit faster and that’s a good thing,' says Mayor Cam Guthrie
May 29, 2020 9:00 AM By: Kenneth Armstrong 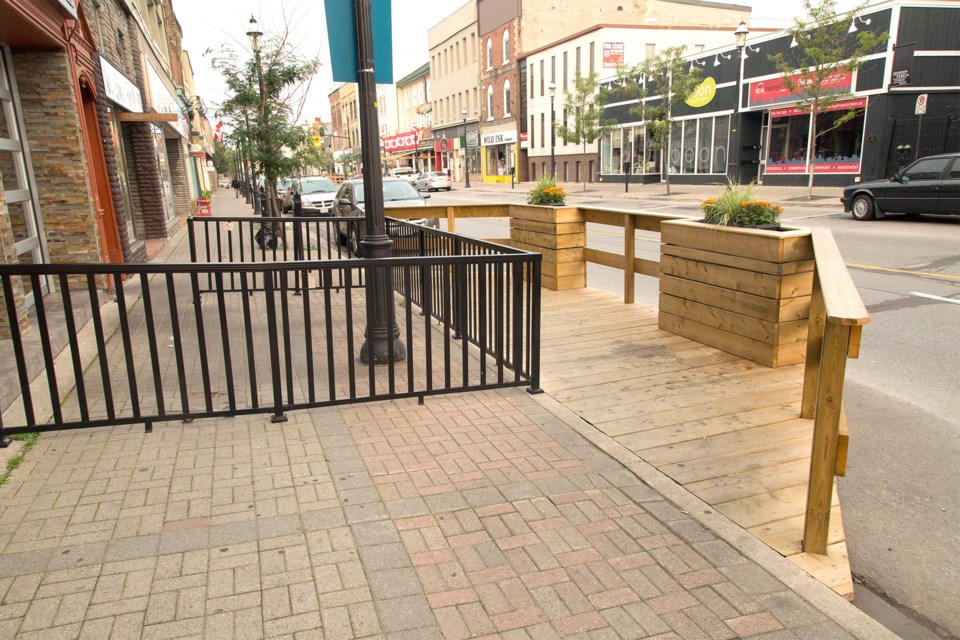 Temporary patios set up in downtown parking spaces, like this one in Barrie, could soon be a fixture on the streets of Guelph. BarrieToday file photo

There may yet be hope for patio season downtown as the City of Guelph looks into the possibility of allowing businesses to use parking spots to help accommodate physical distancing.

Mayor Cam Guthrie said the idea has been tested in other cities like Barrie and may come to council for a decision in June.

Guthrie said he spoke to Barrie's mayor just a few weeks ago about the idea, which is being bounced around within the Mayor's Task Force on Economic Recovery.

“I have also been talking to a lot of business owners and a lot of them are really open to the idea and would really like to have that option available to them," said Guthrie.

Under the plan, a restaurant or other business that needs additional space could lease a parking spot near its front door to set up a patio or other kind of display to assist it in serving more customers while physical distancing requires fewer people to be allowed inside.

“We want to create as much opportunity for businesses to reopen and what’s closely tied to opportunity is capacity," said Guthrie. "If we can increase capacity, while adhering to public health guidelines, especially around physical distancing, then that helps the recovery of the economy for the store that would take part in this type of program."

Currently, outdoor patios are not allowed to be operated by businesses in Ontario, but Guthrie said that restriction is expected to be lifted eventually and the city wants to be ready with a plan to help businesses in their recovery.

He noted the downtown is already coming back to life as businesses are opening their doors to the public as part of Phase 1 of Ontario's plan to reopen the economy.

“The heartbeat of downtown is moving a little bit faster and that’s a good thing," said Guthrie.

A decision to move ahead with the plan will have to come to city council, with input from Wellington-Dufferin-Guelph Public Health and adhering to rules set out by the province.

“As much as I wish we were able to do this yesterday, it requires listening to everyone’s voices and listening to what is required from the province and public health and other stakeholders,” said Guthrie.

The mayor knows some may have concerns about parking spaces being used for anything other than accommodating vehicles.

"We have to make sure we are not excluding any kind of business that may not be able to accommodate such an extension of the store out on the sidewalks or in the parking spots out on the street for courtesy pick up, deliveries and those types of things," said Guthrie.

Going ahead with the initiative while the downtown is less busy is a good opportunity to test the waters of having a more pedestrian-friendly downtown, said Guthrie.

“What could the downtown be like if it were a lot more activated for people, instead of cars," he said.

Although the plan is being created with input from the Downtown Guelph Business Association, Guthrie said he believes it could work in other parts of the city.

"I’d love to see this happen everywhere and be a draw to help any of those businesses that would be able to take part in this kind of initiative," said Guthrie.