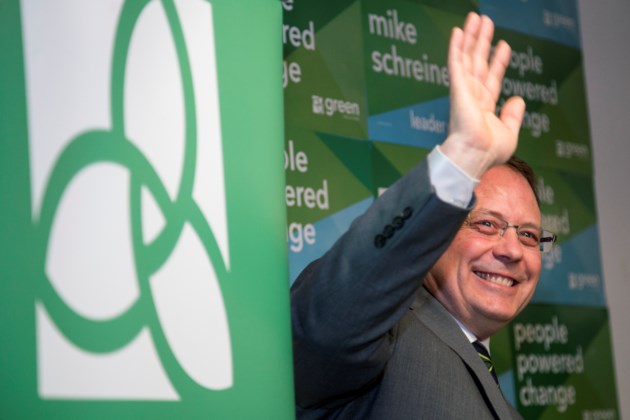 Mike Schreiner is the leader of the Green Party of Ontario and the local candidate for Guelph in the 2018 provincial election.

Mike Schreiner was elected leader of the Green Party of Ontario on November 14, 2009. Under Mike’s leadership, the GPO has experienced substantial growth in its voters, fundraising, staff, volunteers and media exposure.

Since 2009, Mike has regularly attended Queen’s Park providing leadership on issues such as campaign finance reform, as well as advocating for the Guelph community on matters such as protecting Guelph’s drinking water from local quarries. He has led successful policy campaigns to push the provincial government to fund the Experimental Lakes Area, protect local food supplies by restricting the use of neo-nicotinoid pesticides, support small business by increasing market access for local craft breweries and fight climate change by putting a price on carbon pollution.

Mike has served as a volunteer on boards and committees such as  the Lakeside Hope House Fundraising Committee, the Board of Directors of the Guelph based FarmStart, the Brewer’s Plate Steering Committee, Green Enterprise Ontario Steering Committee, a governor for the Canadian International Peace Project, Treasurer and Board member of Campus Coop Daycare, the Toronto Food Policy Council, among others.

Family and community are important to Mike. His wife Sandy and their two daughters are active, spending their free time gardening, hiking, fishing, cycling and volunteering in community activities—such as the Guelph Rotary Tree Planting, Hillside Music Festival, the Guelph Jazz Festival, Guelph Community Clean up, Guelph Coalition for Active Transportation, Democracy Guelph, among others.