Peter Hummel remained motivated to play nearly every night for a year when he heard from frontline workers who appreciated what he did
Mar 25, 2021 1:00 PM By: Keegan Kozolanka 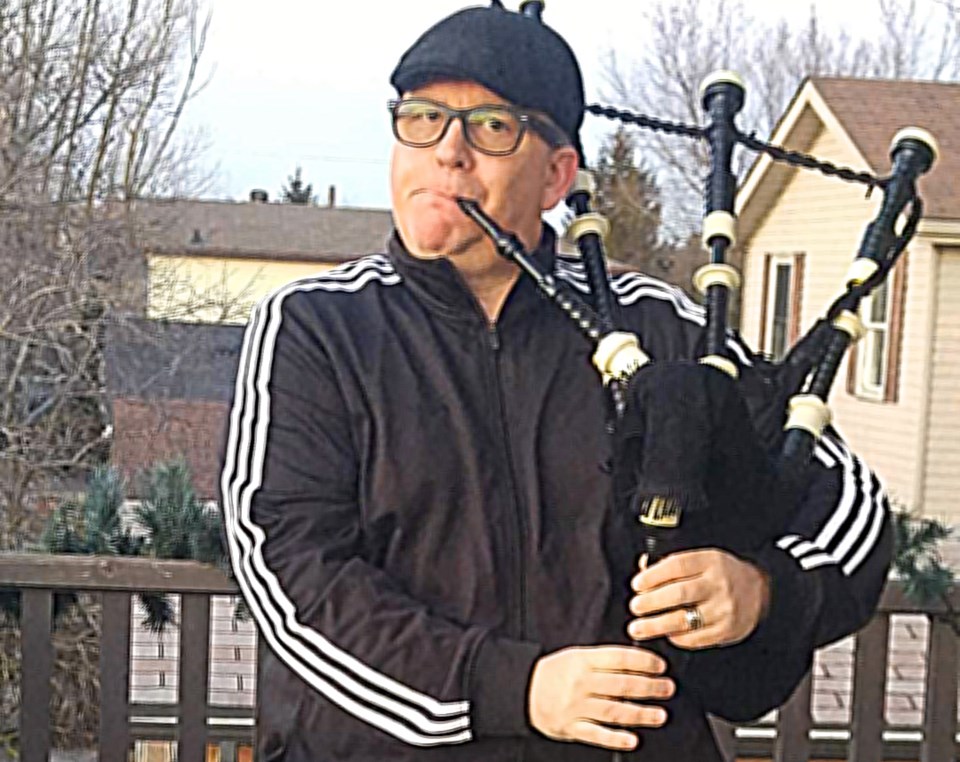 FERGUS – Although banging pots and pans for frontline workers has largely died down, bagpipes can still be heard nightly in one Fergus neighbourhood as a tribute to those still dealing with COVID in their jobs.

On Friday, Peter Hummel will be marking one year of playing the pipes on his porch or balcony nightly at 7:30 p.m. for frontline workers which is a milestone he can’t believe.

“I didn’t think it was going to go on a year,” Hummel said. “I tried to stay positive, I thought ‘yeah this will go on whatever eight months,’ and here we are at a year.”

Hummel would play on his porch while livestreaming to the CareMongering Centre Wellington Facebook page.

He said he has noticed some support for himself and those who did similar things drop off as pandemic fatigue set in but he carries on missing only a few nights for band practice.

He admitted the winter can be hard on your hands and instruments. Sometimes he’d have to play inside on his smaller bagpipe but would still livestream.

Hummel said he remained motivated thinking about the people he works with as an education worker, his wife as a teacher and people he knows in health care who continue to deal with a pandemic.

He mentioned sometimes frontline workers would send him messages thanking him for the support.

In one instance during the summer, ambulance attendants showed up to thank him in person.

“It was kind of nice, things like that happened that just drove me to keep doing it,” Hummel said. “I’m not going to deny it, there were times where I’m like ‘oh my goodness, what am I doing,’ but then you get people who send you messages.”

What became a nightly ritual turned into a sort of social experience for his neighbours who are not annoyed at the noise but thrilled to hear him play.

Hummel said neighbours know if he’s coming out or not based on if he puts his porch light on.

“We’ve been living in the same neighbourhood for just under seven years now and we’ve gotten to know everybody,” Hummel said. “We got to know them on a more personal level. It’s really nice, we have that real neighbourhood feel now.”

On a personal level, Hummel said this has also motivated him to continue to improve his skill and hopes others are encouraged to take up a hobby.

This Friday Hummel is planning something special but didn’t reveal exactly what because he wants a surprise for those who watch.

He encourages people to watch on the livestream on the Facebook group and for those who happen to know where he lives to “please promise to practice social distancing if you want to watch.”