In this edition of Following Up, we check in with Guelph mental health champion Noah Irvine and his efforts to establish a ministry of mental health and addictions
Feb 24, 2021 7:00 AM By: Ariel Deutschmann 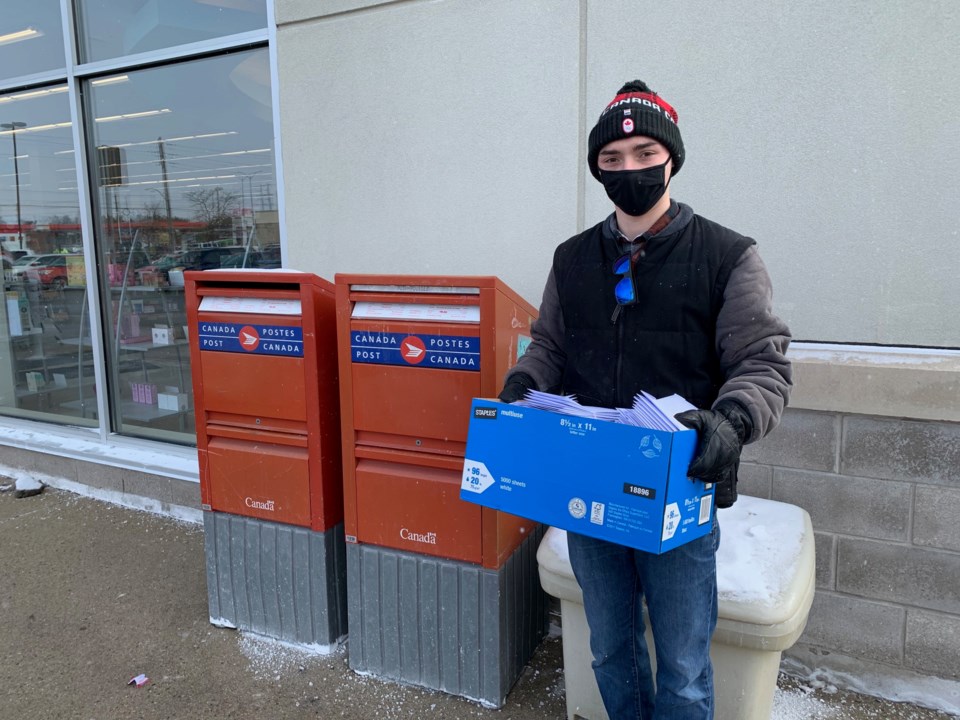 Noah Irvine stands besides a couple of post boxes, holding a box of letters for current sitting members of parliament to ask for their thoughts on a ministry of mental health and addictions. Supplied photo

Now, he is calling on the federal government to step up their support by creating a Ministry of Mental Health and Addictions.

In a release, Irvine says the ministry would have the ability to bring in all levels of government, municipal, provincial, federal and indigenous, to share information and develop solutions.

While the federal government had invested six billion dollars in mental health in 2016, he argues a ministry could do more with those available resources.

“Another key component of that ministry is to unite not only provinces, but also Indigenous communities at all levels, as new wings of federalism, so I think that’s what that ministry could really accomplish.”

The release further mentions by having a seat at the cabinet table, all federal policies can then be viewed through a mental health and addictions perspective, which could also help address any related concerns before legislation, or a policy, is implemented.

Writing letters to every constituency’s office in 2020, Irvine asked these MPs for their thoughts on mental health concerns within their own communities.

He mentions receiving one of the first responses from former Conservative MP Derek Solan, who is in favour of the idea.

“I was quite surprised given his stance on other issues, how supportive he was on this,” commented Irvine about Solan’s response.

“I think it’s kind of opened my eyes a little bit, that partisanship isn’t as entrenched as it seems,” he said about his interactions with different MPs from different parties on mental health, “And that people can move on certain issues.”

Irvine said he has yet to receive a response from Guelph MP Lloyd Longfield on the matter.

“I think that will be the tone from a lot of Liberals, is that constitutionally we can’t do this,” said Irvine, “But I say that you can if the emergency is pressing, and I would argue that the crisis we face for mental health is an emergency, because the issues nationally are very similar, no matter which province you engage with on this.”

In Canada, Irvine says Ontario, Saskatchewan, British Columbia and Nunavut all have some sort-of provincial policy or program in place for mental health. He adds now it’s time for the federal government to do the same.

“I think that in the current climate, I think that putting a ministry in is very doable for them,” he said.

With municipalities from coast to coast dealing with the effects of the pandemic, Irvine adds there isn’t a single riding that isn’t affected by mental health.

“I think that ministers or premiers sit down, I think they would also see the benefits of a ministry,” Irvine continues, “So I think that next step would be to push the provinces again to make this an initiative worth championing again.”

Noah Irvine hopes 'the government for the people' will listen to the people when it comes to health care
Feb 6, 2019 7:45 AM
Comments