In this Following Up feature we set up a few frames with champion bowler and newlywed Graham Fach
Jul 27, 2019 8:00 AM By: Troy Bridgeman 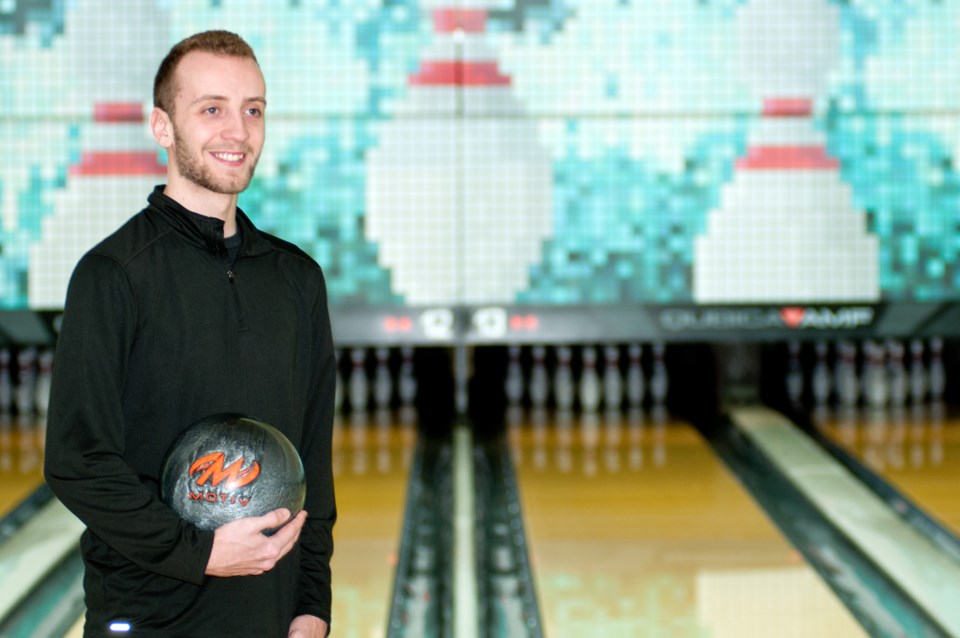 Graham Fach of Guelph stands at Woodlawn Bowl in this photo from 2016. GuelphToday file photo

Guelph bowler Graham Fach made history in February 2016 when he became the first Canadian to win a Professional Bowlers Association tour title, fulfilling a dream he had since childhood.

“When I was extremely young my parents used to bowl in a league for fun with friends one night a week,” said Fach. “They couldn’t always get a babysitter for me so they would bring me along and I would be in a little bouncy chair watching and smiling.”

The sights and sounds of the bowling alley had a comforting effect on Fach that carried on even when he was at home.

“One day at home I was throwing a fit and my mom was trying to find something on tv - a cartoon or something I could watch to kind of quiet me down,” he said. “She flipped on bowling and I stopped. During the commercials I would get all cranky again but as soon as it came back on, I stopped.”

He couldn’t get enough of the game.

“I was drawn to it whether it was the sound or the look I don’t know but my mother swears by the story,” said Fach. “She would actually record bowling on TV so, when I was acting up she could play the tape on the VCR and I would be fine again.”

His love for bowling grew and as soon as he was able pick up and throw a ball he started playing.

“I can’t go a week without bowling and not feel like I am missing out on something,” he said. “I am addicted to it. It’s a part of me. I need to bowl.”

“It is a very unique profession,” he said. “You are busy for months at a time and then you can be very bored for weeks at a time.”

He splits his time between the National PBA Tour season in the winter months and the less publicized Regional PBA Tour.

“I’ve won a couple regional titles that still count as PBA titles,” he said. “I think I am up to five of those. So, even though people aren’t seeing me on tv I am still bowling on the PBA week in and week out.”

In 2010 Fach moved to Ohio and began classes at Urbana University in their Sports Management Program. It was there that he met Jen Donnersbach.

“She went to school to be a teacher and she is actually a second grade teacher but, thankfully, she’s not a bowler,” said Fach. “I have a lot of pride and I don’t need it to get squashed.”

Fach graduated in 2015 and a year later joined the PBA. He and Donnersbach bought a home in Urbana last August and were married June 22 of this year.

“We had 200 people at our wedding,” said Fach. “Her family lives roughly two hours away and all of my family live in Canada so, everyone had to travel. We got married in Urbana so everyone got to see where we met and our new house. It was really nice.”

They honeymooned in Jamaica and when they got back welcomed a new member to the family.

“We just got a puppy and we’re trying to train him,” said Fach. “His name is Molson because I still miss Canada.”

Training Molson is just one thing Fach is doing to fill his down time between the weekend games of the regional tour and the start of the busy National PBA Tour season that picks up next month.

“I’m here on an athlete’s visa and I’m not able to have another job to occupy that time so, I’ve picked up golf,” he said.

Fach attends trade shows to sign autographs and represent his corporate sponsors and he also helps out with youth bowling clinics.

“I do what I can to give back to the community,” he said. “Some of the kids can’t afford the right equipment so I’ll donate some of my old bowling balls and you just see their faces light up.”

Fach’s history making win, during his rookie year, in 2016 at the Barbasol PBA Players Championship at Wayne Webb’s Columbus Bowl in Columbus, Ohio was an inspiration to many young bowlers in Guelph.

He was moved by the response he got when he returned to Guelph to support the tour.

“I went back home and they had news cameras and I was hanging out with the kids,” said Fach.”To be welcomed there and, not only have my name on a tournament I loved to bowl as a kid, but have these kids I haven’t even met, looking up to me is really special to me.”

Fach has made a life in Urbana but he hasn’t forgot his roots and all the people who supported him along the way.

“This sport has given me so many great relationships in my life and I am forever grateful to the sport and those people because they put me in a great position where I excelled and I am just able to enjoy it now.”

Guelph bowler Fach still on a high from ground-breaking PBA victory
Feb 25, 2016 2:19 PM
Comments
We welcome your feedback and encourage you to share your thoughts. We ask that you be respectful of others and their points of view, refrain from personal attacks and stay on topic. To learn about our commenting policies and how we moderate, please read our Community Guidelines.