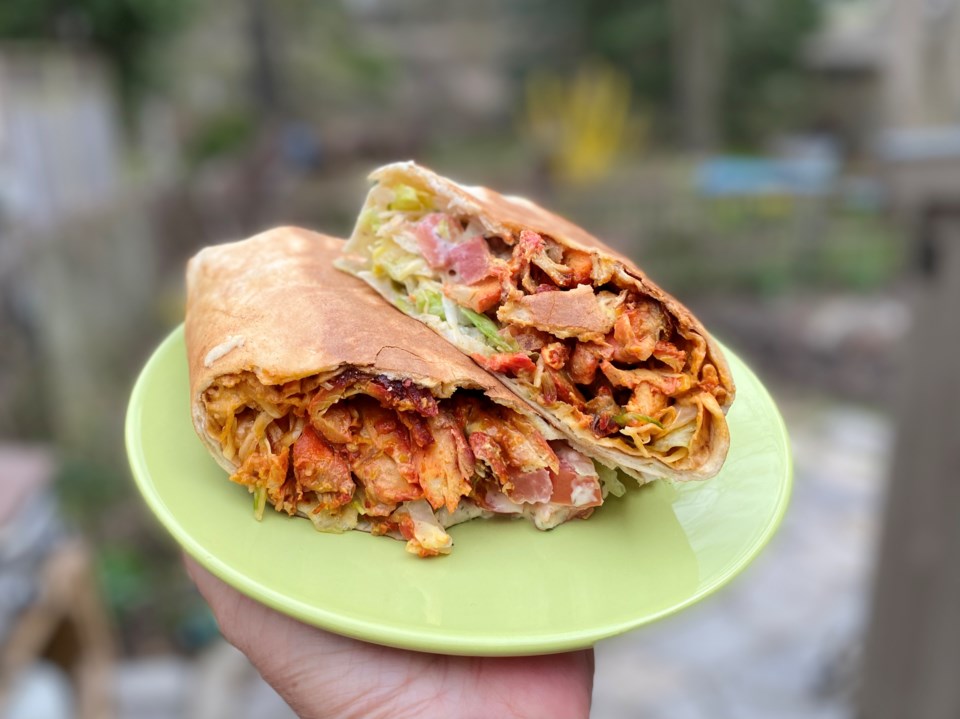 Roasting meat over a fire was without question one of the first methods of cooking. It’s said that nomadic peoples and medieval soldiers used their swords to grill meat over open fires in the 13th century Ottoman Empire. These early chefs eventually made a game-changing realization that when meat was spitted vertically it kept the flames at bay, and the meat from burning.

These were the early days of a technique that eventually brought us shawarma: a dish revered the world wide.

Shawarma is an Arabic term of the Turkish word çevirme — meaning, it turns — and references the rotisserie-style cooking of layers of marinated and seasoned meat which turns on a spit. The shawarma technique of continuously roasting and then slicing the meat off as it cooks first appeared in what is now known as Turkey.

Turkish people call it döner kebab; Greeks call it gyro; Iraqis call it kas. The distinction doesn’t lie in geography alone, however. There are as many subtle differences in preparation as there are people making it, but the secret to a perfect shawarma? It’s in the marinade. Immersed for hours in seasonings and spices like garlic, turmeric, dried lime, cinnamon, and cardamom gives the meat a tangy and warm flavour. It’s then overlaid onto a spinning rod and slowly cooked from the outside, basting in its own juices until layers are shaved off with a knife. This exposes the interior meat so it can crisp up before once again being cut and served. Repeat until all the meat disappears.

At Tangy & Tasty in downtown Guelph, the daily shawarma tower disappears quickly due to its tremendous popularity. On a particularly busy day they can go through as many as four.

Maninder Kaur and Balbir Singh opened their restaurant at 75 Macdonell St. in December of 2009 after years of renown at the Guelph & District Multicultural Festival. People were eager to get their food beyond the weekend of the festival, so they saw opening Tangy & Tasty as the ideal opportunity to setup the first shawarma place in the city and support themselves in their adopted land.

Walking through the doors, you’re immediately struck by the warmth these two possess and sense the great pride they have in living in Guelph. As if my order alone wasn’t enough, I was treated to samples of other menu items like a beautifully marinated tiny eggplant, a taste of felafel, and their stewed lentils. Even the small bite of rice was perfection. But it’s their chicken shawarma that I crave above all, full as I was.

When pressed to divulge their secrets, I was told that their shawarma spice rub is a secret. Untraditional too, as they use a mix of African and Punjabi spices true to their roots. I tell you, they are big on the healing properties of turmeric. Lots of turmeric is good for you. My shawarma was chock full of marinated-in-house chicken, accompanied by chili chutney alongside favourite toppings like the crunchy and bright pickled turnip.

To discover a bit more about Maninder and Balbir’s Tangy & Tasty, give their website, tangytastyguelph.com a look, and visit their Facebook page to discover some new daily specials. Ask them about their life while you wait to devour their beautiful food.

As with humans throughout our world’s history, not all stay put. In fact, many thousands of people under the Ottoman rule left for Mexico between the late 19th and early 20th century.  Shawarma, ever the food of moving peoples, led to the development of the Mexican dish tacos al pastor when it was brought there by Lebanese immigrants. More to come on those in upcoming Best Bites.