In praise of the precious pierogi

Pierogi came to North America with waves of Polish and Ukrainian immigrants arriving throughout the late 19th and 20th centuries
Mar 5, 2021 12:00 PM By: Lynn Broughton 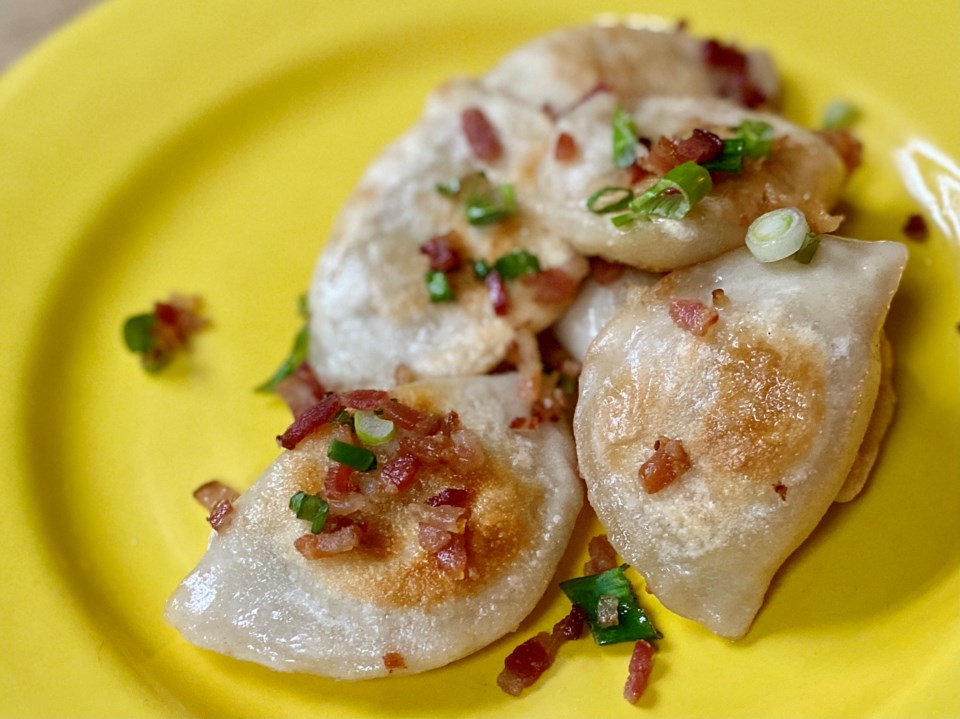 Almost every culture and country has some form of dough stuffed with meats, fish or vegetables. From Chinese dumplings, Japanese gyoza and Cornish pasties, to empanadas, ravioli, samosas, and tamales, it really is a handy way to enjoy, even schlepp, a satisfying meal around.

As the most popular Polish dish around the world, the pierogi is its own handful of convenience and cheer.

These particular dumplings are made with unleavened dough and can contain a variety of fillings: potatoes, cheese, sauerkraut, cabbage, mushrooms, spinach, ground beef, grains, vegetables, even sweet fillings. Folded over and sealed to create pockets, you’ll find them boiled, baked or fried.

Being such a favoured food, many nationalities have laid claim to the pierog’s origins. Given that it was the Chinese who created pasta dough, perhaps the birthplace of pierogi points to the East and was brought to the West via expeditions by Marco Polo. But some think Pierogi traveled from Kiev (now modern day Ukraine) to Poland by a Dominican Friar, Jacek Odrowąż, also known as Saint Hyacinth.

According to one particular legend, in 1238 Hyacinth visited the town of Kościelec, Poland, which had just suffered a catastrophic storm that destroyed all of the crops. The villagers were close to starvation but Hyacinth prayed and the crops sprung back to life. In a show of gratitude, they created a meal of pierogi from the miraculous harvest. Święty Jacku z pierogami (“Saint Hyacinth and his pierogi!”) is an ancient exclamation, a call for help in a hopeless circumstance.

There are patron saints of many other foods as well: of pastries, coffee, even bacon. St. Hildegard was the Saint of cookies. There were saints to ward off troubles with beer and wine, but the humble pierogi may be the only Polish dish that has its own patron saint. This is how ingrained it is in the culture.

Truly the epitome of comfort food, this much celebrated national dish comes from the slavic word pir, meaning a feast. Although potato and cheese are the most common fillings these days, the first instance of an actual recipe for pierogi was documented by Stanisław Czerniecki in his 1682 “Compendium Ferculorum", and contained veal fat, kidneys, greens, and nutmeg.

And then this little dumpling came to Canada.

Pierogi came to North America with waves of Polish and Ukrainian immigrants arriving throughout the late 19th and 20th centuries. The biggest wave arrived in the Canadian prairies between the two world wars, but after the Second World War, the majority settled in Ontario, bringing with them their culinary specialties. By the 1960s, pierogi were commonplace in Canadian grocery stores.

These half-moon savoury treats are pervasive throughout Canada today, carrying with them echoes of a rich traditional past.

You can find exceptional pierogi in Guelph at Broken English Bistro on Speedvale Ave. E. Danuta and Edward Rusiecki opened their eatery three and a half years ago, creating dishes based on family recipes for their menu. This Polish culinary heritage flavours their entire menu, and has firmly established the bistro as an instant favourite in this town, undoubtedly watched over by the spirit of Saint Hyacinth, Patron Saint of the pierogi.