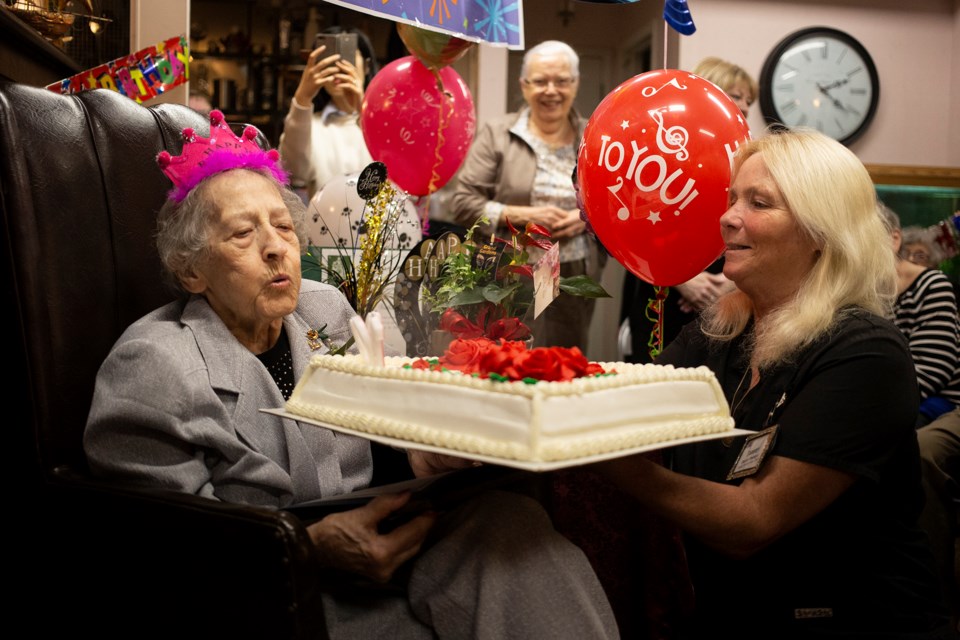 Lorna Rake blows out the candles on her birthday cake Tuesday during a party celebrating her 100th birthday at Norfolk Manor. Kenneth Armstrong/GuelphToday

A Guelph woman who celebrated her 100th birthday on Tuesday says the century mark snuck up on her over the years and she was shocked and surprised at a party held in her honour.

A long-time resident at Norfolk Manor, Lorna Rake celebrated her 100th birthday at the retirement home on Tuesday.

“I lived a very simple life,” she said. “I had two sisters older than me and I got a lot of hand me downs.”

She moved from London, Ont., to Guelph in 1950 and lived for many years on Speedvale Avenue.

“But for one year we lived on Alice Street when we first moved here,” she said.

For that year, Lorna and her husband Gord lived above the garage of a house owned by their landlord.

“I think her name was Mrs. McCarthy and she used to sell puppies,” said Lorna.

Her husband worked for many years as a trades instructor at the Ontario Reformatory, while Lorna worked at the Dominion grocery store on Speedvale, walking distance from her house until she got another offer.

“My boss got transferred up to Eramosa Road and when he went he said ‘come on Lorna,’” she said. “I didn’t like it as well because I had to pay bus fare, whereas I could walk on Speedvale.”

The couple raised their two sons Doug and Ron in the Speedvale Avenue home and spent much of their time camping in Honey Harbour.

“Almost every weekend when the weather was warm,” said Lorna.

Her son Doug died in 2009 and her husband Gord has also passed away.

Lorna has lived at Norfolk Manor for the past 11 years after moving out of the family home on Speedvale.

David Ing, managing director of Norfolk Manor, said Lorna is a gracious lady and always a delight to be around.

Ing said Norfolk Manor always makes a big to-do for its residents turning 100 because it’s such a special occasion.

“When someone reaches 100 it’s really a privilege — it’s a small club,” said Ing. “It’s quite an achievement.”

Lorna said she was surprised and shocked by the fuss of the party, which included cake, balloons, cards and a sing-along of happy birthday by about 30 people in attendance.

She said reaching 100 years of age was never something she thought much about, it just kind of snuck up on her.

Mayor Cam Guthrie was in attendance to present her with certificates from his office, as well as from the Governor-General of Canada, Prime Minister Justin Trudeau and Queen Elizabeth II.

“At lunchtime I didn’t have any dessert because I heard there was going to be some cake in the afternoon,” said Lorna, holding a slice of birthday cake. “I got my dessert.”