2016: A look back at GuelphToday's top stories 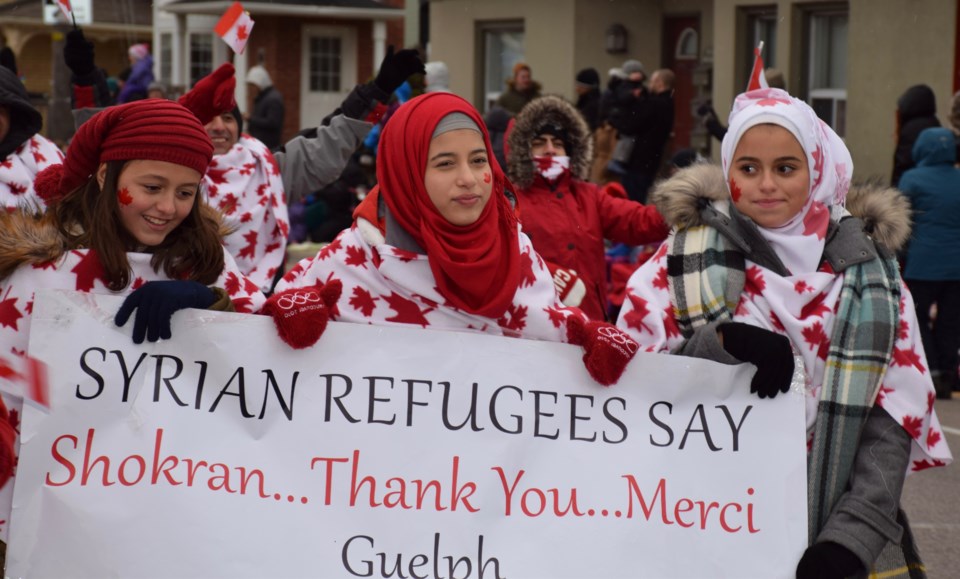 Between 300 and 400 Syrian refugees settled in Guelph in 2016, with local organizations, church groups and local businessman Jim Estill leading the way in help making their transition as comfortable as possible.

Estill donated $1 million to help relocate families here but went much further, organizing support networks and even jobs for many of those arriving in Guelph.

The only black eye came in November, when a handful of individuals booed a group of Syrian refugees taking part in the annual Santa Claus Parade. The move backfired, as the huge amount of support for the Syrians and criticism of the incident drowned out the boos of the few.

Next year the Syrian refugees have been invited to lead the Santa Claus Parade.

The provincial issue of water taking permits exploded in Guelph, thanks to the proximity of Nestle Waters Canada's plant in Aberfoyle and the very active Wellington Water Watchers organization that opposes water taking and water bottling operations.

With the province seeking input into its stance on water taking, which eventually included a two-year moratorium on new or expanded permits, Guelph City Council found itself at the eye of the local typhoonand held a special meeting to absorb input before it arrived at its stance.

A scientific study by city staff gave ammunition late in the discourse to the anti-water bottling movement by showing that Nestle's activities could, down the road, potentially have an adverse affect on Guelph's groundwater needs.

Nestle is also under the microscope in Centre Wellington Township, where it's purchase of an existing well has drawn the ire of many in the community. Nestle said it didn't know the township wanted to purchase the well when the company closed the deal.

There were three murders that had Guelph connections in 2016.

Aly Sunderani, a 35-year-old employee, was gunned down at the Comfort Inn Hotel on Silvercreek Parkway on March 1. His killer remains at large.

Jenna Gazzola, 34, a Guelph native and daughter of longtime Guelph police officer and Wellington Catholic District School Board chairman Marino Gazzola, was murdered in her Hamilton apartment on April 19. A neighbour was charged.

Guelph's Chad Robinson, 26, was stabbed to death just after midnight on Dec. 19 during a confrontation outside a work Christmas party he was attending in London. A man was charged.

The City of Guelph included a rare special 1 per cent tax levy in it's 2017 budget, in part to help create a fund to help address the city's aging infrastructure issue. Some of the fund will be used towards "city building" capital projects.

It is the first time in years the city has issued a special levy on top of a property tax increase.

Born and raised Guelphites Andrea Seccafien and Natalie Achonwa led a strong contingent with Guelph connections at the 2016 Olympic Summer Games in Brazil.

Seccafien competed in the 5,000 metre event and Achonwa for Canada's womens' basketball team.

There were many others with Guelph ties, including longtime Guelph residents Eric Gillis (10th in the marathon), wrestler Korey Jarvis (eighth in the wrestling 125 kg division) and track and field coach Dave Scott-Thomas.

A number of other Olympic athletes train with Guelph's Speed River Track and Field Club and swimmer Evan Van Moerkerke is a Guelph Marlin swimmer and former Guelph Gryphon.

Guelph's Hitachi plant on Woodlawn Road announced in early December that it was laying off its entire 129-person production staff due to a downturn in demand for the huge mining vehicles it produces. The company said it hoped to recall many of the workers but would be shifting the plant's focus to financing, parts and refurbishing existing vehicles.

In September Guelph's Canadian Solar laid off 130 employees at its Speedvale Avenue plant due to lack of demand for its solar panels. The plant that employed around 700 people two years ago now employs half that number.

7. Rural Arsonist on the Loose?

There were a total of six suspicious and unexplained fires in abandoned properties on the city's fringe or just outside Guelph in the second half of 2016. No one was injured in any of the blazes, but fire and police officials were "very concerned" about the fires, which all happened in abandoned sheds and barns.

The 24-year-old Guelph man who had some personal battles with addiction in his young life went missing at the beginning of April. Friends, family and strangers pleaded for him to contact someone and gathered to conduct searches at several city locations, including along the banks of the Eramosa River where he was last known to have been. On May 22 his body was found near the river. Foul play was ruled out.

It was the principle of the thing that seemed to bother Guelph residents showing up at the Waste Resource Innovation Centre last summer to find out the city had started charging a $5 fee to drop of yard waste. It was done to help mitigate a huge shortfall in the WRC finances.

Things got so heated at times that the city was forced to hire private security for the drop-off location after people began taking their frustrations out on city staff.

The city dropped the fee at the start of 2017 and even Mayor Cam Guthrie admitted it had been a mistake.

The Upper Grand District School Board caused much consternation and uproar as it made significant changes to the enrolment process for its French immersion program.

Students can now only enter French immersion in junior kindergarten and a school-based random selection system to decide who gets the limited spots was put in place.

The new system gave preference to new students with siblings already enrolled at a particular school but not to new students based on their proximity to the school, which led to a huge backlash from many parents.

Honourable Mentions: Guelph shelves its District Energy initiative; Guelph Storm gets a $5 million break from the city over 10 years; squatters forced to shift from a property on the edge of Guelph; a second WalMart opens in the city; a teenagers Zombie Halloween attraction raises $40,000 for Guelph General Hospital; the man who killed Grace Glofcheskie sentenced; hockey legend 'Leaping' Lou Fontinato passes away; Guelph teen killed in helicopter crash while on vacation; two U of G students die in their residence rooms; two iconic Guelph businesses - Hamilton's Garage and Thomas Video - close their doors; Guelph's deputy CAO sues a local blogger for $500,000; neighbourhood residents lose a hard-fought battle to save the former St. Matthias Church property from development in the south end.