It took the Kahn children two days to colour each individual brick on their driveway
0
Mar 27, 2020 2:32 PM By: GuelphToday Staff 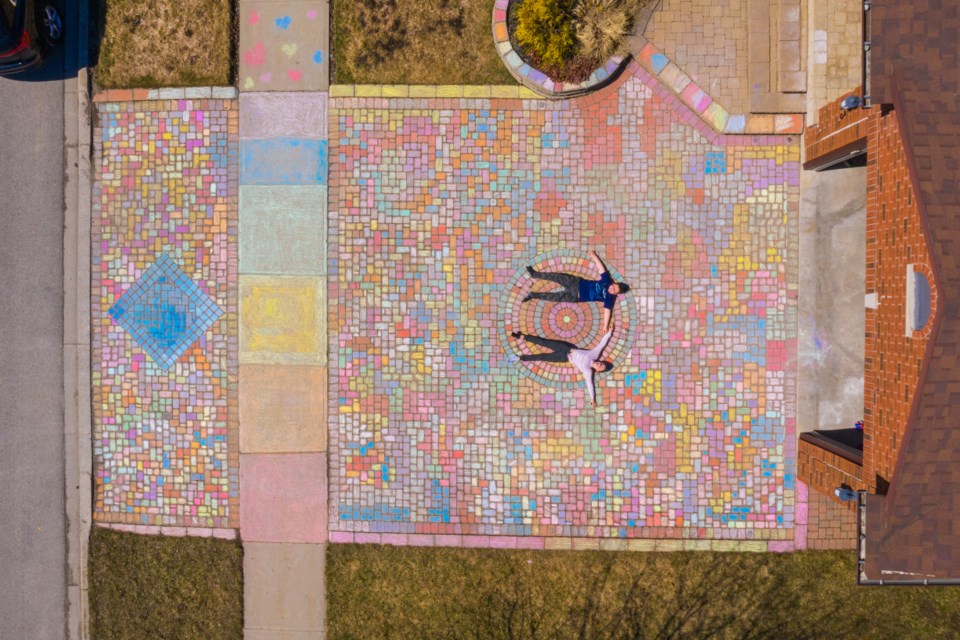 A photo taken with a drone shows the efforts made by the Kahn kids to brighten up their west side driveway, and neighbourhood. Photo courtesy of lauraamendolaphotography.com

A Guelph driveway on Guelph's west side is creating quite the stir.

The Kahn family, or more precisely Avery and Grayson Kahn, decided to colour each of the bricks in their driveway with chalk to help brighten the neighbourhood and put a smile on people's faces.

Mom Lisa Kahn said "It took Avery and Grayson about two and a half days (16 hours) of colouring. They wanted to share a smile with all the people walking outside right now. They have loved meeting new people and families as they admire it from a distance."

The first attempt was stymied by a rainfall, but some dry weather allowed them to complete the task over the past two days. The result is stunning.

"2 long days and lots of chalk later my kids finished our driveway. This is round 2. They were half way done a few weeks ago before the rain fell. It’s brought many smiles to our neighborhood," Kahn posted on the Guelph Facebook group Sidewalk chalkboard, where people post photos of their sidewalk chalk efforts from around town.

Mom Lisa Kahn made a public request for anyone with a drone to come by and record the moment and local photographer Laura Leighton answered the call, using her drone to capture the image on a bright, sunny Friday.

Leighton has offered to take similar photos for people making the effort in return for a small donation to Guelph General Hospital.

She can be reached through her web site at www.lauraamendolaphotography.com.

Expect showers, thunderstorms this afternoon: Environment Canada
May 24, 2020 12:04 PM
Comments
We welcome your feedback and encourage you to share your thoughts. We ask that you be respectful of others and their points of view, refrain from personal attacks and stay on topic. To learn about our commenting policies and how we moderate, please read our Community Guidelines.