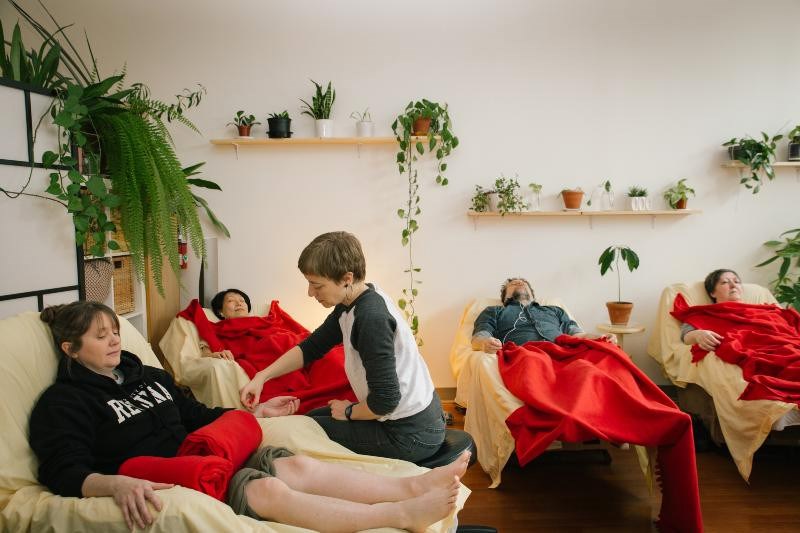 “This is the best-kept secret in Guelph. How long have you been here?” are the words community acupuncturist Lisa Baird says she hears regularly.

Within the Guelph Community Health Centre in Downtown Guelph is a quiet room with nine large lazy boy recliners covered in soft yellow cotton sheets with warm red fleece blankets, dimmed lighting and a welcoming environment open to anyone and everyone who needs acupuncture treatment.

The best part? It's on a pay-what-you-can basis on a scale of $20 to $40 so patients are given the choice of affordability.

And despite the beauty of this community service, Baird says it still remains somewhat of a secret to the people of Guelph.

“Last time I ran the numbers was a year ago. We treated about one percent of people in the area,” says Baird.

But the people who are familiar with the model are willing to drive the extra mile she says.

“We get people driving in from Acton, from Hamilton, from Kitchener. Even if you factor in the gas, it’s still way more affordable to come here twice a week,” says Baird adding that with the overarching rate of a single treatment in most clinics, people just cannot afford it with most clinics offering their services for $500 to $10000 for ten treatments.

And seeing the need for a group acupuncture clinic is what led her to open the Guelph Community Acupuncture in 2013, six months after she moved to Guelph.

“There are lots of people who need affordable acupuncture who just don’t know yet because there are so many people with chronic pain,” says Baird.

“It’s a little bit heartbreaking when you see in any given room there is someone who is managing chronic pain.”

With roughly over 100 people seen each week, the clinic books six people an hour who are treated in the same room.

She says with acupuncture, it is important to get the dosage right.

“A lot of people try it once or twice and it didn’t really work for them but they couldn’t afford to come back and they think that acupuncture doesn’t work,” says Baird who gives the example of a patient who takes two pills of a 10 course antibiotics and stops taking the medicine once in the short time they don’t see results or if they do see the results right away.

She says the effects of the acupuncture are cumulative

With the low cost, high volume model, the social business runs efficiently while helping several people in the community.

“Any extra money we make goes back into the business to keep it running,”

Baird says while one on one acupuncture definitely works, she prefers the community group model —also the traditional model of acupuncture practiced for thousands of years — because regular people can afford it and because it provides a sense of reassurance to patients who are nervous to be poked with needles.

With short whispered conversations that take place with all the patients in the same room, Baird says the treatment cuts right through the small talk.

“You set their needles, you lean their chair back, you give them a blanket, usually they go to sleep or at the very least they become really relaxed,” says Baird.

With people so overstimulated with the technology in the world today, Baird says for many patients, the clinic is the only place they wind down to take a break from technology where they put an emphasis on choice.

“From how much you pay on the sliding scale, to which recliner you sit in, to how far you’d like to lean back, and how long you retain the needles. Again and again, the message is ‘it's your body and your choice,’” says Baird.

Patients are not required to take their clothes off as the practitioners only ever use points in the lower legs, the forearms and on the head to treat various pains such as chronic back pain, arthritis, colds, skin rashes, anxiety, hot flashes among many other health concerns.

“People talk about this place as this little oasis downtown Guelph,” says Baird.

She says along with her staff member, naturopathic doctor Stephanie Cordes, the two practitioners get a lot of vicarious joy from seeing the difference before and after they visit the clinic.

“It’s the most fun job I ever had,” says Baird.

“When you meet someone when they are in a lot of pain, and an hour later they are not, their face is softer and they’re smiling at you.”