Nearby construction has vehicles using the narrow street in The Ward neighbourhood as a cut-through to downtown
Jul 7, 2020 12:30 PM By: Tony Saxon 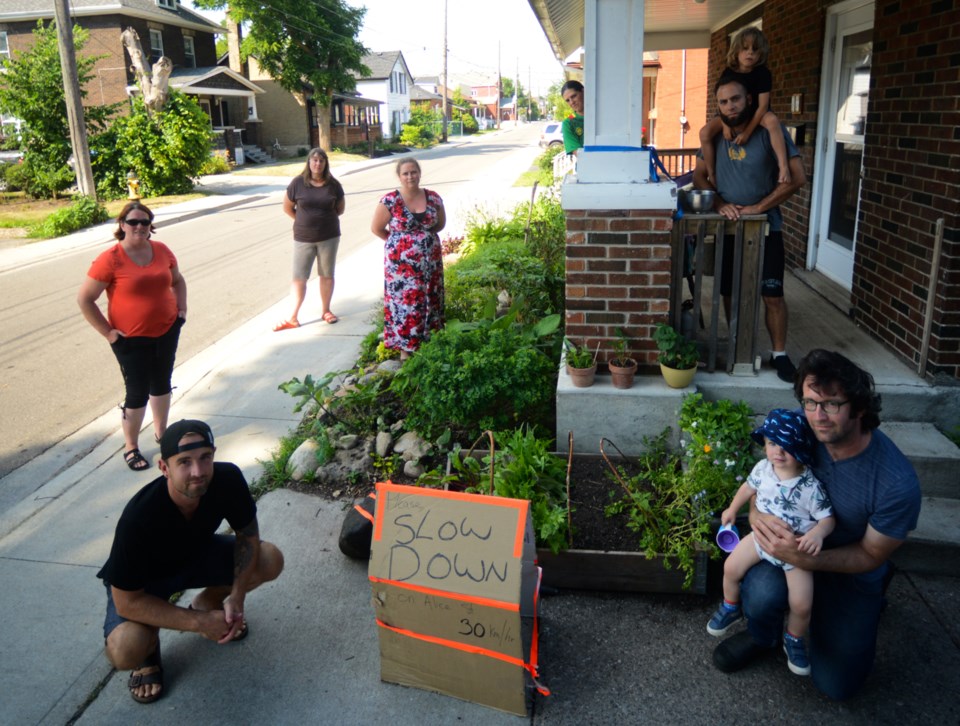 Some residents of Alice Street in The Ward are deeply concerned about traffic issues made worse by the closing of Elizabeth Street for construction. Tony Saxon/GuelphToday

Residents of Alice Street aren't mincing words about ongoing traffic woes that have gotten even worse of late.

"It seems like traffic here has got to the point where it's just ridiculous and it seems like nothing is going to change until a kid gets hit by a car," says Andrew Giordano, who has lived on the narrow street in The Ward neighbourhood for several years.

"Frankly, that's totally unacceptable to all of us. That should not be what it takes to get things changed here."

There are many young famiies on the western end of Alice Street. Those families are afraid to let their children wander out front of the house. Forget about teaching them to ride a bike.

Even though half that section of street has a 30 km/h speed limit due to the nearby Sacred Heart Catholic School (the other half is 50 km/h), you don't have to wait long to see several cars exceeding that speed limit.

"What we are thinking is that we are being ignored because we aren't the rich area of Guelph," he adds, listing off several areas of town that do have traffic calming.

Ward 1 councillors Dan Gibson and Bob Bell are aware of the problem and have been pushing to get some relief for the residents.

"It's been terrible out there," added Bell, who cycles on Alice Street to get to work each day.

"But I don't know what I can do. I ask and request city staff to do something, but I can't tell them to do anything."

Bell said there are funds available for traffic calming measures, "but nothing's getting done."

City traffic management staff did not immediately return a request for comment.

Things got way worse with the recent closure of much of Elizabeth Street for construction. Cars and trucks are now using Alice Street as a cut-through to downtown.

"The speeding is always a problem, but when it's one car what are you going to do about it? It's one car," says Ian Flynn. "When there's construction and it's cars all day doing it. Traffic is up maybe 400-500 per cent. They're frustrated they get turned off Elizabeth and they're probably frustrated and trying to make up time going downtown."

Many streets of The Ward neighbourhood were not built for the size and speed of today's vehicles. Some weren't built for vehicles at all. Speeding takes on a whole new meaning when the road is narrow and the front doors of houses are just a few feet from that road.

There have even been trucks and a GO bus go down the narrow street where it isn't uncommon for truck mirrors to extend over the sidewalk when two cars pass one another.

They've even taken matters into their own hands, placing a cardboard sign on the road. It got run over, several times. So they put a large rock with the sign. That was promptly removed by a city crew.

Charlene Downey says the situation on Alice Street is an indication of what traffic woes are going to be in the future for The Ward as infill developments spring up.

"We're all for filling in the brownfields, but there are no plans for the traffic (that will bring). We have zero, literally zero, traffic calming.

"Anyone that says we don't need traffic calming in The Ward, I would challenge them to stand here with their three year old on a bicycle while two cars go zipping by at 50 apiece," Downey says.