Arts, sciences and business will come together at U of G as part of new research institute

The new Guelph Institute of Environmental Research will allow for collaborations between all seven of U of G's colleges
0
Oct 23, 2019 8:10 AM By: Kenneth Armstrong 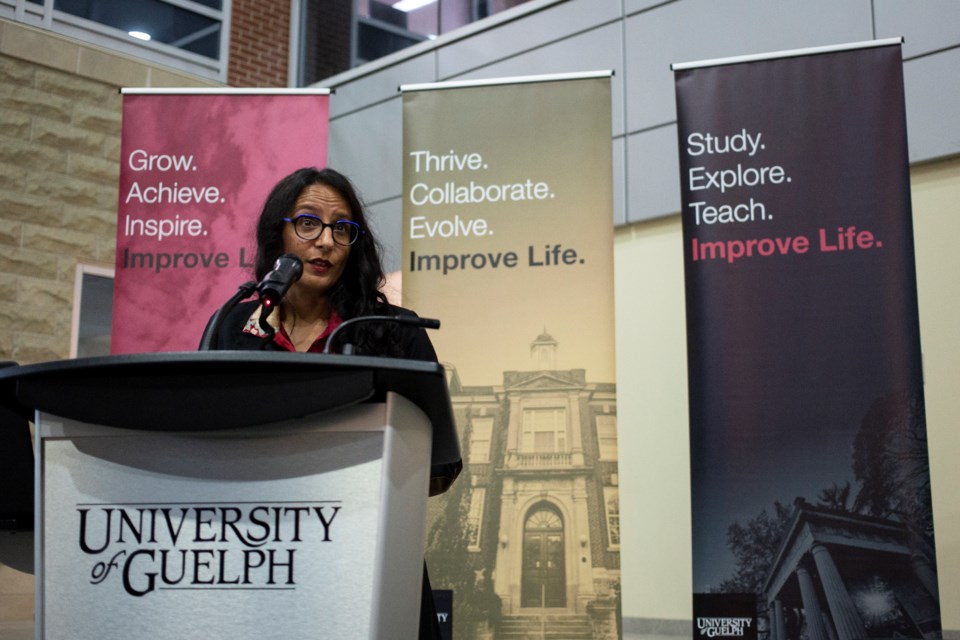 Dr. Madhur Anand speaks during the launch of the Guelph Institute of Environmental Research, held Tuesday at U of G. The institute aims to stimulate and support interdisciplinary research. Kenneth Armstorng/GuelphToday

A new research institute at the University of Guelph may end up pairing biology research with the business school or engineering research with fine arts, or any other number of combinations within its seven colleges, all in the name of fostering new connections for environmental research.

U of G is connecting the dots between its seven colleges, allowing for interdisciplinary environmental research to take place through its new Guelph Institute of Environmental Research (GIER).

It will also provide a new funding source for Guelph researchers.

Dr. Madhur Anand, the inaugural executive director of GIER, is leading by example, as she is herself an environmental scientist and a poet.

Anand said she was already a scientist when she began writing poetry.

“My poetry does very much integrate with my scientific knowledge and ecological knowledge — and even my actual research,” said Anand. “They speak to one another.”

She wants to see more arts and science collaborations.

“That’s something you don’t see very often and this is an opportunity and place to have that,” she said of the new institute.

Anand envisions scientists working with social scientists, humanists, historians or the business school in all sorts of new and exciting ways.

“There is lots of cutting edge research that can be done at different interfaces,” she said.

During a launch party for the new institute held Tuesday evening at U of G, the university’s president Franco Vaccarino said he finds Anand’s own bridge between arts and sciences to be inspiring.

“Her work in general exemplifies that interdisciplinary approach to environmental research and scholarship that the institute seeks to sponsor,” said Vaccarino.

The new institute will allow for collaborations on environmental research between U of G’s College of Arts, College of Biological Science, the Gordon S. Lang School of Business and Economics, College of Engineering and Physical Sciences, College of Social and Applied Human Sciences, the Ontario Agricultural College and Ontario Veterinary College.

In total, more than 200 faculty members will be involved with the institute.

Vaccarino said environmental studies have been central to U of G’s mission since the founding of its first colleges.

“I would say our work with the environment actually predates the coining of the term ‘environmental research,’” he said.

Some of the challenges research from the institute will tackle range from climate change, access to clean safe water and food, invasive species and diseases, threats to biodiversity, just to name a few.

“Today we face complex environmental challenges that Many of us would agree are at a scale that the world has never seen,” said Vaccarino. “This research has never been more important.”

Telling time through timeless songs
Feb 18, 2020 11:00 AM
Comments
We welcome your feedback and encourage you to share your thoughts on this story. We ask that you be respectful of others and their points of view, refrain from personal attacks and stay on topic. To learn about our commenting policies and how we moderate, please read our Community Guidelines.