As Lyme disease rapidly spreads in Canada, there is no immediate test to detect it 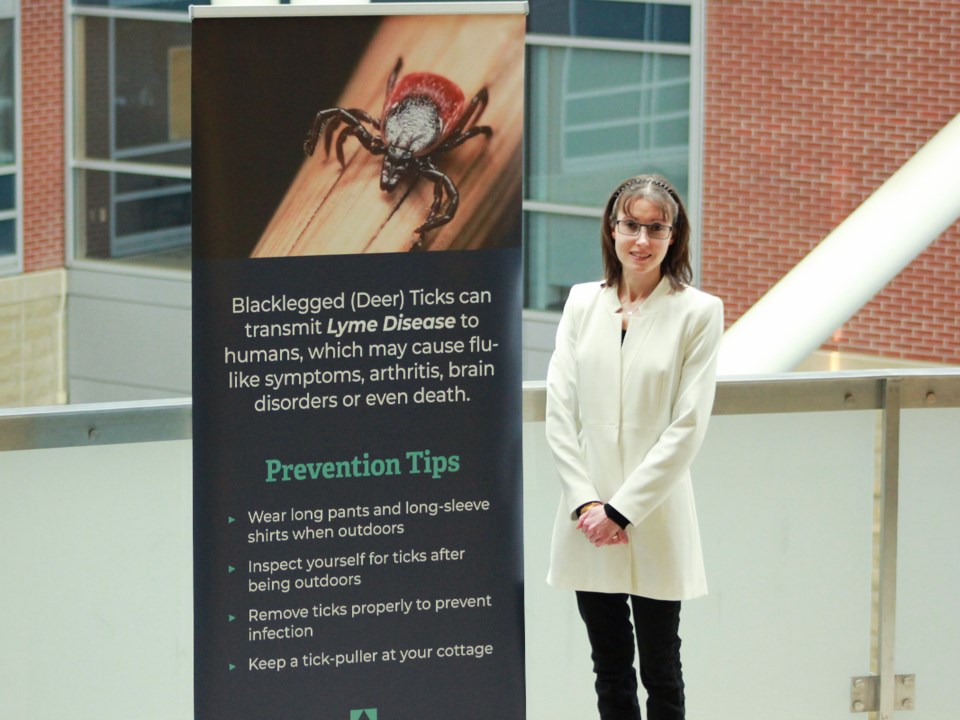 As the warmer weather finally sets in, the tick season brings on a serious cause for concern as Lyme disease cases in Canada rapidly rise.

The problem? There is no perfect laboratory test that can tell you whether or not you have Lyme disease, especially in the early stages,” says director at G.Magnotta Lyme disease Research Lab Dr. Melanie Wills.

With ticks as small as a poppy seed, it is difficult to detect that you have even been bitten by a one. When symptoms of the flu, illness, or fever appear, there’s no way of knowing immediately whether or not these are actually symptoms of Lyme disease.

“The current test is based on your body’s immune response and that can take four weeks so its not a fast and responsive test and so our lab is looking at the interactions between the pathogen and different biomarkers that could come out in early disease that could actually be used as a more effective diagnostic,” says Wills

“A lot of these numbers are likely underreported for a variety of reasons,” says Wills.

These ticks travel with migratory birds and are deposited all over land areas across the country.

“So they're flying over and they could drop off onto your patio for example,” says Wills.

“Even if there's no established colony if you're in an area where the surveillance has not identified that to be a risk area, If a bird flies over your head and drops a tick and you encounter that tick, you could get Lyme disease.”

Wills says symptoms of the disease emerge early on and can even be seen within days of the tick bite.

“You can have the expanding erythema migrans rash. And that's the most obvious characteristic of Lyme disease. But only nine per cent of people who have a rash actually have that,” says Wills.

Erythema migrans is known to resemble a target rash with a red centre, an area of clearing and another red ring around it.

“If you see that, it's very obvious, but most people will not see that because even if you have a rash, it can have variable presentations,” says Wills.

Willis says if you do notice a tick bite and have a fairly immediate reaction to it, you must act fast to the evidence of the pathogen injected inside you. If you go to the doctor, the doctor will likely put you on antibiotics for 14 to 21 days and you have the best prognosis at that point.

However she says if you miss that rash by mistaking it for something else, and if that rash continues to manifest, the pathogen injected in the body can move through the vasculature and go into other organs of the body.

“You can get an acute rash, the first ovalized rash which is in the area of the bite but later in the disease, you can have those bullseye show up all over your body,” says Wills.

“It can go to your heart and it can cause Lyme carditis, it can cause very serious heart problems including death. It could go to the brain, so there neurological manifestations of Lyme. It can go through the joints and it causes arthritis. All these things can take shape within a little while after you’ve been bitten.”

So what is the most important step to take for now? Precaution, says Wills.

Researchers at the G. Magnotta Foundation Research Lav and Abell Pest Control teamed up to raise awareness about the diseases and precautions the public should take.

Wills says time is of the essence and it is also important to take precautions by being vigilant and doing regular tick checks if you’ve been outside especially in areas there is grass.

Kids and pets are more vulnerable to ticks because they are closer to the ground and not as aware of their bodies.

It is also important to remove ticks properly to prevent an infection by pulling the tick from the root with the tick-puller.

“For starters, anyone who spends time outdoors should be vigilant, including those who live in urban areas,” says the president of Abell Pest Control, John Abell.

“The likelihood of someone contracting Lyme disease in his/her own backyard is very real.”

Wills says one of the most common misconceptions is that ticks are deep in the woods.

“Studies have come our in the last couple of years where they have evaluated woodlands versus urban woodland and believe it or not, urbanized areas, playgrounds, for example, are risk factors,” says Wills.

Wills says the lab cannot confidently say that any area is risk-free.

“Our take on this is that biomedical research on this has to advance because of so many elements. There are the ecology and the risk factors but then there's the follow through, the medical. So if you do get that tick and you get bit, what's your prognosis? And that's our role here, to improve that prognosis,” says Wills about the research devoted to this cause in the G. Magnotta Foundation Lyme disease Research Lab.

The G. Magnotta Foundation for Vector-Borne Diseases is a non-profit organization inaugurated by Rossana Magnotta, CEO of Magnotta Winery in 2012 after her husband passed away from Lyme disease. The couple was married for 36 years and spent their final years together struggling with the disease’s misdiagnosis and misunderstanding.

The foundation partnered with the University of Guelph in 2017 and awarded them a $1.4 million grant to create the G. Magnotta Lyme Disease Research Lab which is now Canada’s first dedicated translational Lyme disease facility that uses an evidence-based translational medicine approach to generate diagnostic tests and treatments for Lyme Disease.

Relatively new to the cause, the foundation has been making enormous strides.

“In science, you always stand on the shoulders of giants. We hope that we have actionable research in the next couple of years,” says Wills.