The Guelph Civic Museum will still host an estimated 600 to 700 students for this year’s STEM Week, but other venues will also host events, like Brother’s Brewing and the Science Complex at U of G
Nov 14, 2019 7:30 PM By: Kenneth Armstrong 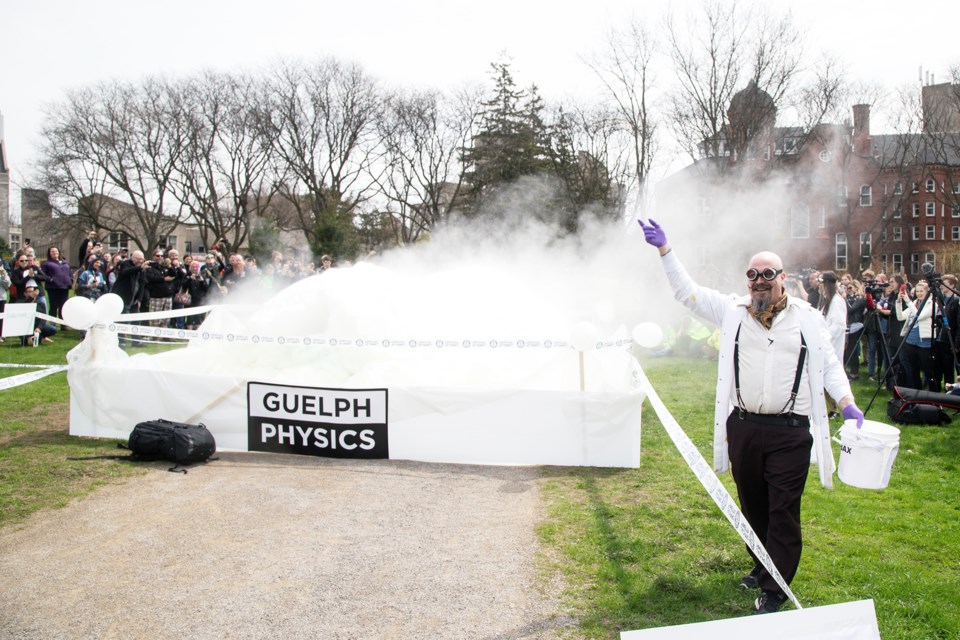 Orbax seen during a record-setting attempt by the University of Guelph Physics and Astronomy Club to create the world's largest elephant toothpaste earlier this year. The department is hosting STEM Week 2019 later this month at the Guelph Civic Museum and other venues, like Brothers Brewing. Kenneth Armstrong/GuelphToday

Science can be intimidating, says one of the organizers of STEM Week 2019. He says holding more science-based events across the community during that week may to make it accessible to more people — young and old.

Last year, exhibits for STEM Week were held at Guelph Civic Museum, but Orbax said this year there are events to be held in a number of locations across the city.

“I think for a lot of people — from kids to adults — they find science intimidating,” said Orbax. “What we are trying to do is bring people who know about this stuff already and bring them into contact with people in the community — without a whole lot in between.”

The museum will still host an estimated 600 to 700 students for this year’s STEM Week, but other venues will also host events, like Brother’s Brewing and the Science Complex at U of G.

On Nov. 25, Brothers Brewing will be host to the N3: Nano Night, in which the Guelph Nanoscience Club will demonstrate concepts like acoustic levitation, quantum locking and hydrophobic surfaces.

“Basically, it’s going to be an event of sit down, have a beer and then check out all of these very cool science demos that are going to be right there in front of you,” said Orbax.

On Nov. 28, a public lecture titled The Role Exploring Mars Plays in Unraveling Earth's Origin Story will be held at the Science Complex Atrium and will feature a public talk by former Gryphon AND former Canadian Space Agency prospect Dr. Scott VanBommel.

Holding the events in the community help to make science more accessible to everyone, said Orbax.

“You have the opportunity to actually speak to someone who had space training or to someone who knows about quantum levitation — it’s just putting the layperson in direct contact with people who are working in these fields,” he said. “It’s all about trying to get this out to people.”

STEM sessions for students in Grades 5 to 8 will be held from Monday, Nov. 25 to Thursday, Nov. 28 at the Guelph Civic Museum. Students will be given the opportunity to learn about vibrations, waves, light, sound, electricity and many other physics phenomena through hands-on activities and demonstrations.

On Tuesday, Nov. 26, a special evening session will be held at the museum for Girl Guides and youth groups.

A special 1 p.m. PD Day event will be held Nov. 29 at the museum, aimed at the whole family. Orbax and the Department of Physics will bring the world-famous physics roadshow to the Guelph Civic Museum

Limited space is available. To book, contact museum.bookings@guelph.ca or phone the Guelph Civic Museum at 519-836-1221.

For more information on the STEM Week 2019 events, click here.