Wednesday’s debate was hosted by the Guelph chapter of the Council of Canadians at Guelph City Hall
Oct 11, 2018 8:30 AM By: Kenneth Armstrong 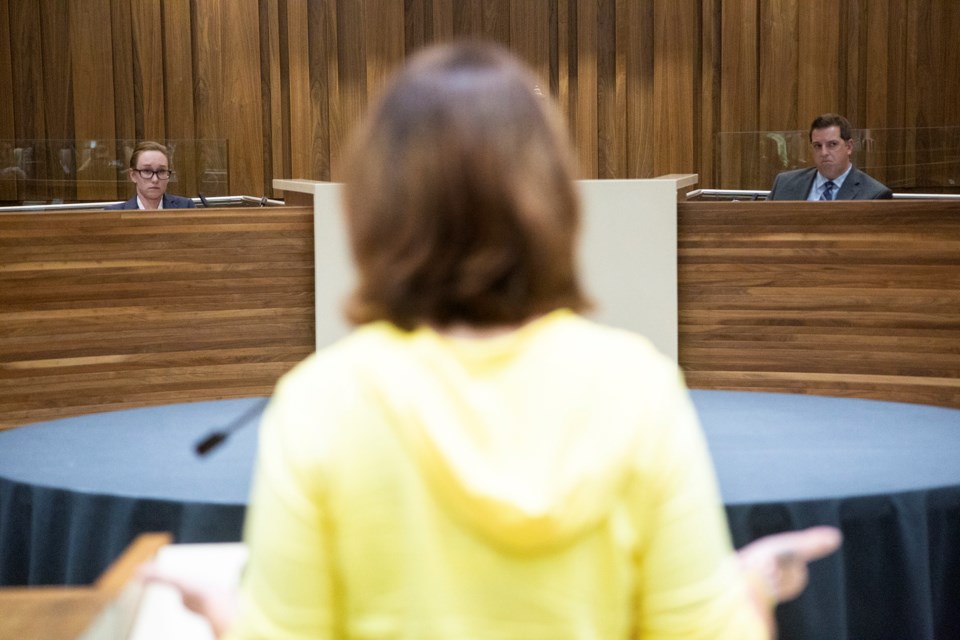 Mayoral candidates Aggie Mlynarz and Cam Guthrie listen to a question from the gallery during Wednesday's debate at Guelph City Hall. Kenneth Armstrong/GuelphToday

On Wednesday, residents of Guelph were encouraged to ask questions directly to the candidates in the fourth mayoral debate between incumbent Cam Guthrie and challenger Aggie Mlynarz.

So many residents came to the mic to ask questions in council chambers at Guelph City Hall that organizers changed the format by cutting answers by the candidates from two minutes to one minute to accommodate the number of questions.

At the end of the two hour debate, about a half dozen were patiently waiting to ask a question but turned away due to time restraints.

Wednesday’s debate was hosted by the Guelph chapter of the Council of Canadians, a non-profit organization that encourages citizens to hold governments and corporations accountable on topics like clean water, fair trade, green energy, public health care and maintaining a vibrant democracy.

Moderating the debate was Frank Valeriote, former member of parliament for Guelph.

In his opening statement, Guthrie said he has built strong relationships with other levels of government and has been a cheerleader for the achievements of the citizens of Guelph.

Not waiting for the actual debate portion to begin, Mlynarz rebutted in her opening statement: “we don’t need a cheerleader, we need a strategist. Someone who can take a team that is Guelph, our government, our community stakeholders and coordinate our efforts toward common goals, not just play games.”

Mlynarz said the city is bursting at the seams and  needs to grow intelligently.

The debate format was split into three 30-minute sections. The first covered public transit, parking, city services and staff responses to the public, as well as water and waste water management.

During a question about salary increases for mayor and council, Mlynarz suggested it was unacceptable that Guthrie voted to increase his own salary during the most recent term of council.

“What it resulted in is the mayor’s salary did, in fact, increase by $35,000,” said Mlynarz. “I still feel that Mr. Guthrie, already having filed his papers to run again, should have recused himself from the vote, as I do feel that was a conflict of interest in doing so.”

Guthrie said the mayor must vote when a motion comes from the floor.

“ It was a motion from council,” said Guthrie. “It’s important for everyone to recognize, even if I had not voted, it still would have passed.”

Guthrie said for eight years he has been on council — four years as a councillor and four as mayor — he has declined the annualized salary increase.

“This is something I am respecting back to the taxpayer on, because it’s something I said I was going to do and continue to do,” he said.

There was no conflict of interest, said Guthrie, because he was voting for the raise in salary for whoever the citizens of Guelph would choose to be the next mayor.

Taking questions directly from the gallery, one woman used the time to vent her frustrations with the current mayor about how the former Guelph Correctional Centre lands should not be developed, but instead used as park land.

“I am almost sick to my stomach, because there are two Cams — there’s the public Cam and there’s the Cam who sits here and votes,” she said. “Why do you say one thing and do another thing? Why do you flip flop all of the time?”

In his short response, Guthrie said, “I think I will just be respectful, Frank, and say that lady is entitled to her opinion.”

In her rebuttal, Mlynarz said the exchange is an example of the fractured relationships between citizens, council and developers over park land.

“I think this is the sort of broken relationships from that governance and lack of policy making that are now coming to fruition,” said Mlynarz.

In the third section, questions were opened up to any topic, in addition to subjects like infrastructure, affordable housing and municipal-provincial-federal relations.

One man in the audience asked both candidates what their first action would be as mayor.

“That is one of the biggest issues I am hearing, especially when I go door knocking, is we need to get a handle on this issue,” said Guthrie. “We need to immediately convene that group and figure out what we can do and where the resources and investments need to be and to handle those issues — because they are all interconnected.”

Mlynarz said she would prioritize the creation of a develop a task force to create a mental health strategy for the city.

“It’s something I think needs to be brought around the table as soon as possible,” she said.

Both candidates said they would like to see the city contribute to the capital costs of the Guelph Humane Society’s move to a new building.

Guthrie noted the importance of city staff conducting service reviews. Mlynarz pointed out that service reviews were also conducted under the previous council and that only one was actually completed during the most recent term.

In regard to the transit service review, Mlynarz noted one was completed by the city in 2010, but many of the recommendations were not implemented. “These were all ideas that have been floating around city hall for almost 10 years,” she said.

Guthrie said the city is exploring the creation of a 311 telephone service to make the accessing of city services more streamlined for citizens.

Both candidates said they support the Overdose Prevention Site remaining in the city.

In a question about support for a new hospital in Guelph, Mlynarz said the priority from the province on that file is low.

Guthrie said a $55-million expansion to the Emergency Department of Guelph General Hospital has been sent to the Ministry of Health and Long-Term Care for approval and said the city must come up with 10 per cent of that funding. He hopes the next council will approve that the funding comes from the proceeds of merger between Guelph Hydro and Alectra.