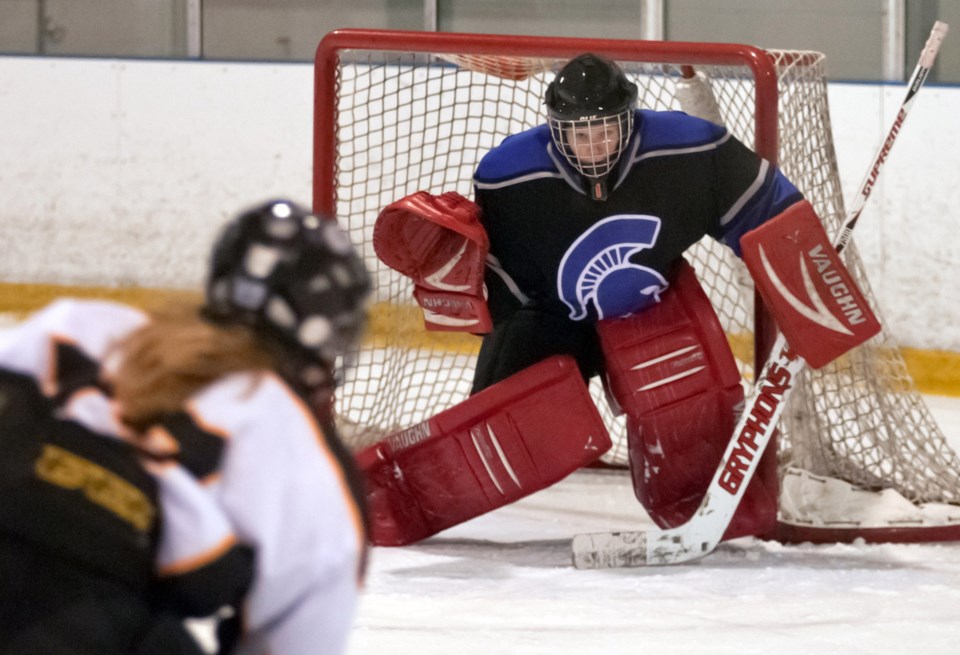 Goaltender Andrea LaCroix of the Centennial Spartans keeps an eye on Emily Palmer of the Centre Wellington Falcons during Wednesday's District 10 high school girls' hockey final. LaCroix had the shutout as Centennial won 4-0.

"Because we had an undefeated regular season, we wanted to go undefeated (in the playoffs) because we wanted be District 10 champs and go to CWOSSA," Centennial coach Paul Denoon said.

The Spartans accomplished that Wednesday afternoon when they claimed the league's bragging rights with a 4-0 victory over the Centre Wellington Falcons of Fergus in the championship match at the West End Recreation Complex.

"It's a shutout so it's that much sweeter," Denoon said.

Andrea LaCroix was credited with the shutout in net for Centennial, although she wasn't busy after the first seven minutes of the game.

Erika Gilbert led the scorers with a hat trick while Brooke DiCicco also scored. Kathleen Roberts, Erika Phillips and Samantha Gilbert had two assists apiece while DiCicco and Morgan Dezell had one each.

"It wasn't just me," Erika Gilbert said. "It was the girls, they got the puck to me. There was a lot of teamwork."

The title win was the second in a row for the Spartans and their sixth in 10 years. The victory was Centennial's 12th in D10 play as the Spartans won all 10 of their league games and added two playoff wins. Erika Gilbert credited the team's chemistry as playing a large role in the unblemished season.

"The teamwork, the commitment and all the girls are a lot of fun to be around," she said. "We're just like a big group of sisters."

For Centre Wellington, the Falcons lost three times in D10 play and all three were against Centennial. The Spartans had won their two regular-season meetings by identical 3-1 scores.

While both teams advance to the CWOSSA AAA championship tournament next week in Cambridge, the D10 final was important for that tournament in terms of seeding.

The Spartans won't be getting an extra ice time to get ready for the CWOSSA tournament.

"We're not going to really do a lot of practising," Denoon said. "The girls are busy playing on their other (rep) teams. We'll have a couple of meetings and just reaffirm some of our systems and that's it."

The CWOSSA tournament, an eight-team affair this year, is to be played next Wednesday and Thursday at Cambridge.

Bracelet of Hope presents virtual roundtable on how to move forward during COVID-19
Jun 3, 2020 9:00 AM

Good morning, Guelph!
Jun 3, 2020 6:00 AM
Comments
We welcome your feedback and encourage you to share your thoughts. We ask that you be respectful of others and their points of view, refrain from personal attacks and stay on topic. To learn about our commenting policies and how we moderate, please read our Community Guidelines.