Sexuality educator and author Cory Silverberg says it is important to ask questions to children learning about sex, not pretend adults have all the answers
0
Mar 20, 2019 8:30 PM By: Kenneth Armstrong 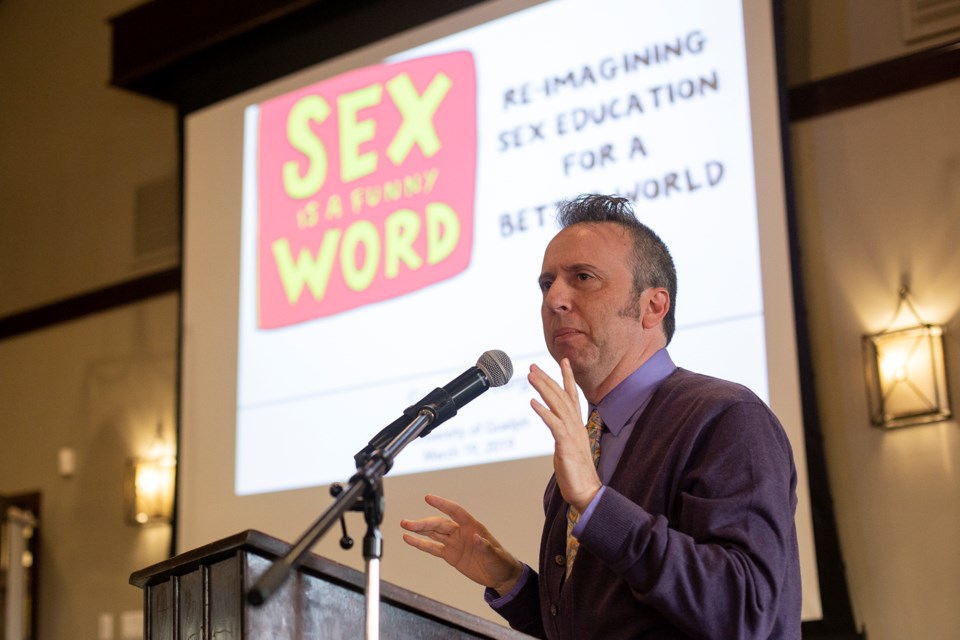 Author and sexuality educator Cory Silverberg speaks at Cutten Fields on Wednesday. During the event, SIlverberg spoke to the audience about his experiences of reimagining how sexual education is presented to kids. Kenneth Armstrong/GuelphToday

Speaking at a University of Guelph event on Tuesday, an award-winning author and sexuality educator says a rethinking is needed about how sex education is presented in order to make it accessible to more people.

Cory Silverberg is a Canadian-born sexuality educator now working in the United States. Silverberg made a presentation at Cutten Fields on Tuesday which shares the name of his most recent book, Sex is a Funny Word.

Silverberg told the audience at Tuesday’s event that public sexual education has never been for everybody. He challenges people to rethink traditional sexual education, which he says is created, presented and geared toward white, able-bodied straight people.

Two of the books Silverberg co-authored about sexuality are aimed at children. The language used in the books is simple and asks as many questions as it answers.

Today’s children are learning about sex outside of the classroom, said Silverberg. His books are intended to meet them there.

In his picture book What Makes a Baby, Silverberg tells the story of how a baby is made without limiting the description to a dated mother-and-father-only model of conception. Instead, the book asks readers ‘who helped bring together the sperm and egg that made you?’

The idea to bring Silverberg to a U of G event came about after the Ontario government proposed a repeal of the 2015 sexual education curriculum in favour of one created in 1998.

In Silverberg’s most recent book aimed at a pre-pubescent audience, Sex is a Funny Word, kids are presented with concepts around sexuality like respect, trust, joy and justice.

In Sex is a Funny Word, kids are told bodies are kind of like books — everyone has an inside and an outside. The outside is like the cover of a book that everyone can see, while the inside of the book is filled with stories that only you can see or feel.

The concept of consent plays a major part in the book, as do themes of learning about your body and feelings around sexuality.

Like in his earlier book, Silverberg asks questions of the reader. In Sex is a Funny Word, Silverberg said he wanted to address the possibility that some of the readers in that age range may have faced some kind of sexual exploitation.

In one section, readers are asked if anyone has tried to touch them in a way that feels confusing, uncomfortable or scared. They are also asked if they have been asked to touch someone in a way that makes them feel the same way.

Silverberg said asking questions of children about sexuality is at least as important as answering them, if not more so.

“It’s something a lot of people don’t like much, because most people think sex education is supposed to answer questions,” said Silverberg. “When I don’t answer a question it’s not because I don’t have 20 answers.”

Last week, the Ontario PC government announced a new sexual education curriculum which appears to retain much of the 2015 one, with one exception being that gender identity now being taught in Grade 8 instead of Grade 2, as it was under the former Liberal-created curriculum.