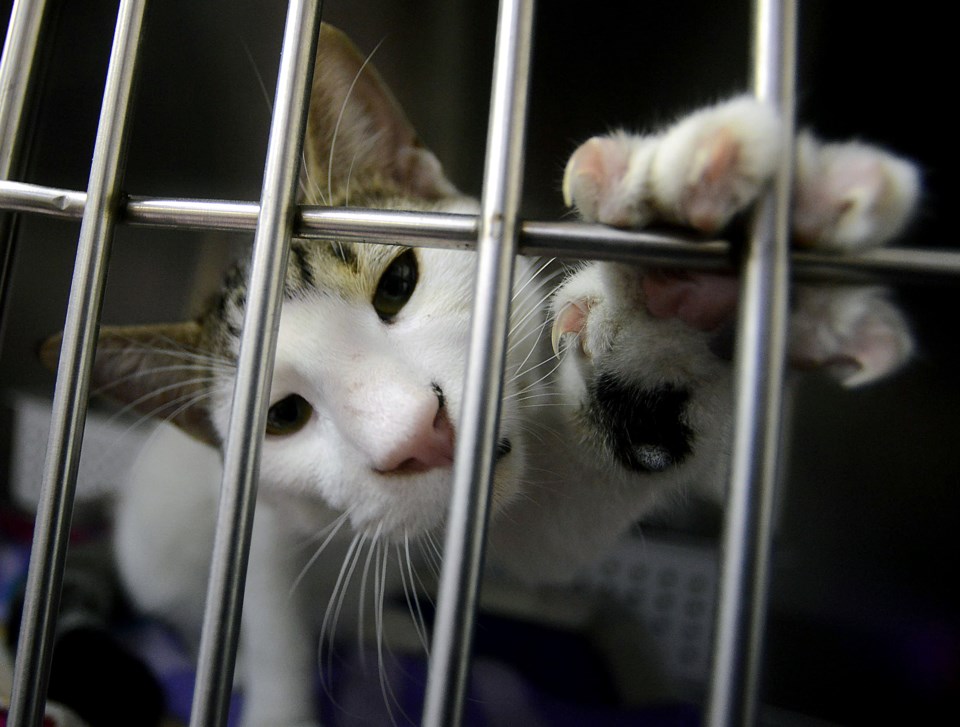 Hercules looks out from his cage in the cat room at the Guelph Humane Society. Tony Saxon/GuelphToday

The City of Guelph is moving towards banning outdoor cats within the next five years.

Guelph City Council’s Committee of the Whole approved a new animal control bylaw on Monday, which includes a $25 cat licence by 2018.

The recommended bylaw goes to full council on Dec. 19 for final approval.

But some of Monday’s discussion centred on how the licensing of cats was part of the process moving towards creating a bylaw that will ban them from roaming outside.

The city’s General Manager of Operations, Doug Godfrey, told a meeting of council’s Committee of the Whole Monday that not allowing cats outdoors is something the city hopes to phase in over the next five years.

“I’d like to see us move in the direction of all cats be kept indoors,” commented councillor Bob Bell.

Another big reason for cat licensing is to reconnect more cats brought in to the Guelph Humane Society with their owners.

The Guelph Humane Society will take in roughly 600 cats this year, with only 13 per cent of those cats being reunited with their owners.

While there are far fewer dogs brought in to the Humane Society, roughly 80 per cent of those get reunited with owners.

The new animal control bylaw covers everything from exotic pets to goats.

The clause that calls for a $25 cat licence passed by a 8-4 vote. Those voting against cat licenses were councillors Leanne Piper, Mike Salisbury, Christine Billings and Mayor Cam Guthrie.

The recommendations approved Monday are as follows. They now need final approval from council on Dec. 19 to go into effect.

1. That the licensing of cats be phased in and not become mandatory until 2018, and that no collar or license tag be required if the cat is microchipped and the information is kept current

2. That the User Fee By-law be amended to include a $25 Annual Licensing Fee for cats

3. That $5 of each cat license sold be allocated to a program to be developed by the Animal Control Working Group, Guelph Humane Society and City Staff to address health and welfare issues for cats

4.That a requirement to restrict cats from being at large be reviewed in five years and staff be directed to continue to work with external partners to develop an education package regarding cats at large

5. That staff be directed, with input from representatives from pet stores and other stakeholders to develop regulations including the prohibition of dog and cat sales within the City’s Business Licensing By-law

6. That roosters be prohibited in the City of Guelph

7. That the User Fee By-law be amended to include a one-time fee

8. That an exception to the Prohibited Animal Schedule “A” be added to permit sheep and goats up to a limit of two on a single property for up to 12 properties, as an introductory program to determine the feasibility of the exemption

9. That City staff continue to work with the Animal Control Working Group to develop a Code of Practice respecting care and treatment of animals

10. That City staff continue to work with stakeholders to develop an education package and outreach materials to assist in providing information to help address wildlife conflicts within the City

11. That the fees for animal licensing provide a 25% discount for residents purchasing a licence for a second or subsequent licenses

12. That the licence fees be reduced by 50% for any resident who qualifies for other City subsidies, such as the Affordable Bus Pass.

An added recommendation that was approved saw the distance between chicken coops and neighbours reduced.