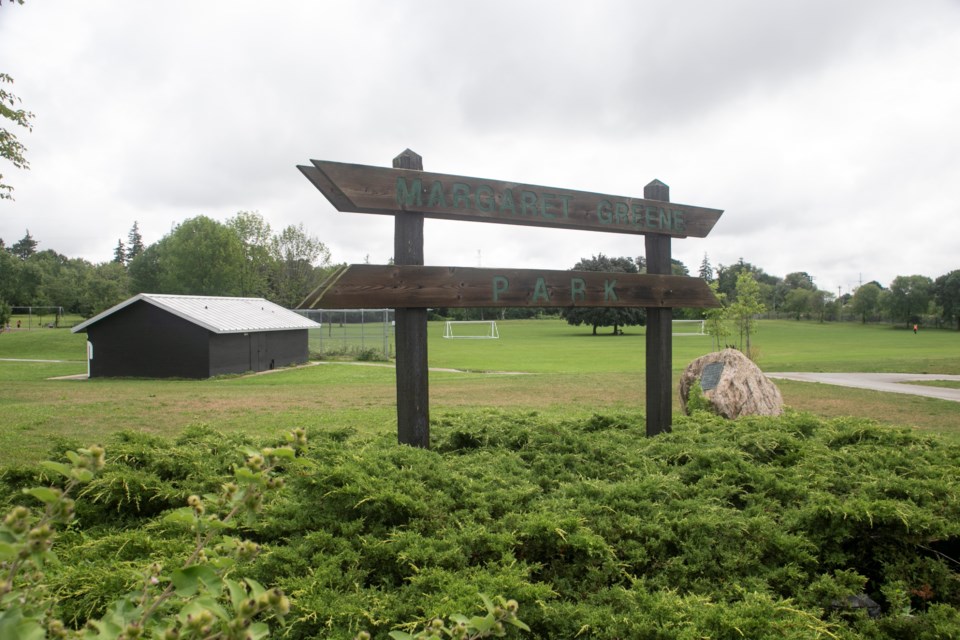 A portion of Margaret Greene Park may be converted into a Traction Power Substation by Metrolinx, infrastructure it says is necessary to electrify track and improve service in the region. Kenneth Armstrong/GuelphToday

Improved rail service is important for Guelph, but not at the cost of a portion of a public park that runs along tracks in the city’s west side, says the city’s top engineer.

Terry Gayman, general manager of Engineering and Transportation Services at the City of Guelph, said the city is not in favour of Metrolinx building a Traction Power Substation (TPS) in Margaret Greene Park.

“Parkland is important to our community, and in fact the City wants more parkland, not less," said Gayman in an email to GuelphToday on Wednesday. "We’ll be encouraging Metrolinx to reconsider their selection.”

He said the improved rail service and the associated environmental benefits from electrification are an important part of the city’s Strategic and Community Plans, but the city does not want TPS infrastructure in a city park.

The city will be posting its position on the park location for Metrolinx records, said Gayman.

On Tuesday, Metrolinx spokesperson Fannie Sunshine told GuelphToday that technical constraints factored into its decision to earmark Margaret Greene Park as its preferred TPS site over other available property in the area. The move is necessary, says Metrolinx, to electrify track in the area and improve rail service in the corridor.

Metrolinx characterized the park as 'vacant land' on early plans shared on its web site.

Final designs have yet to be made public for the proposed TPS site. Metrolinx has said it needs about 50-metre-by-75-metre space for the project.

Amenities at Margaret Greene Park currently include a playground, leash-free area for dogs, tennis and pickleball courts, washrooms and baseball and soccer fields, among others. The park is located adjacent to St. Peter's school and is accessible from both Ferman Drive and Westwood Road.

A public meeting is planned for 4 p.m. Thursday at Margaret Greene Park. Ward 4 councillor Christine Billings said she hoped Metrolinx staff will be on hand to listen to concerns from neighbours in the area of the park.

Last month, a portion of Dublin Street was permanently closed to traffic at the track level.

Gayman said Metrolinx has agreed to collaborate with the city as it moves forward in its plan to review all at-grade crossings in Guelph.

Dublin Street was closed because it did not meet updated safety regulations for rail crossings,” said Gayman. “While Metrolinx may propose additional closures the City is advocating for them to explore all options.”

LETTER: Metrolinx plans a threat to Guelph neighbourhoods
Aug 2, 2020 11:00 AM
Comments
We welcome your feedback and encourage you to share your thoughts. We ask that you be respectful of others and their points of view, refrain from personal attacks and stay on topic. To learn about our commenting policies and how we moderate, please read our Community Guidelines.